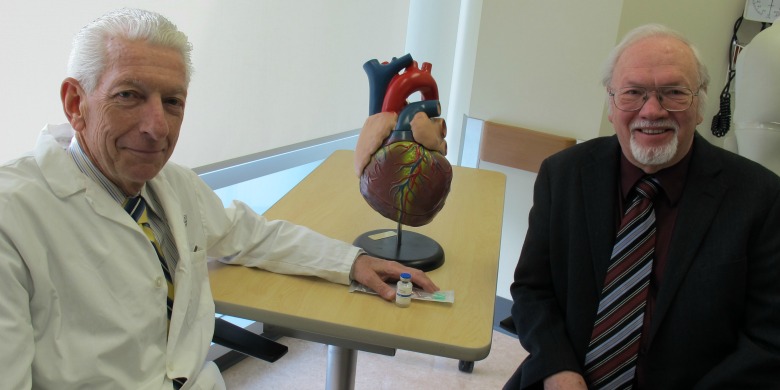 130311-paularmstrong-banner
Paul Armstrong (left) is joined by Robert Harrison, who had a major heart attack two years ago and took part in the study.

(Edmonton) An international study co-led by a University of Alberta researcher has found clot-busting drugs administered in the first three hours after a heart attack can buy patients valuable minutes until an angioplasty can be performed.

“The challenge with angioplasty is it needs to be provided very quickly by an expert team in a facility that has such experts available 24 hours a day, seven days a week,” says Paul Armstrong, a Distinguished University Professor in the Department of Medicine and a cardiologist with Alberta Health Services. “This is very difficult to achieve in many instances, and the resulting delay can lead to loss of valuable heart muscle and higher rates of death, shock and heart failure.” With the drugs, the study shows heart-attack patients can delay their angioplasty by an average of 78 minutes.

Armstrong, who co-led the study with Frans Van de Werf of Belgium, says clot-busting drugs can be given via needle and administered in an ambulance, while angioplasty, which is a time-sensitive necessity regardless of drug administration, uses a catheter to mechanically open the blocked coronary artery causing the heart attack and must be administered in tertiary care hospitals by specialists trained in the field. Only three such facilities exist in Alberta.

“There are many health-care sites around the world that don’t have the luxury of these specialized sites,” he said. “And in many countries, it can be challenging for patients to get to such facilities within three hours—due to long travel distances, heavy traffic, poor weather and other factors.”

This discovery will be helpful to patients who cannot access angioplasty rapidly and will change the way doctors treat and care for heart attack patients, Armstrong believes.

“Those who advocated the one-size-fits-all approach will be forced to rethink their proposition because we tested and delivered both treatments optimally in this study,” he said. “This study shows health-care workers have two treatment options available, so they can use whichever is best—the right therapy for the right patient at the right time and the right place.

“It’s also a wake-up call to health-care providers to pay attention to symptoms so patients are treated early, and it emphasizes that ambulance and pre-hospital care is a critical part of making sure the patient has the best outcome possible.”

Armstrong says it is widely known that the longer the delay to treatment after the onset of heart attack symptoms, the more severe the heart attack and the smaller the chance for the patient to survive.

Robert Harrison, 71, of Edmonton, took part in the study. He had a major heart attack two years ago on the Easter weekend. He received clot-busting drugs in the ambulance, followed by an angioplasty within three hours.

“Speaking with my cardiologist and family doctor, I think the clot-busting drugs saved my heart from having damage. I have no damage at all to my heart. I think my outcome would have been worse without the clot busting drugs.”

The international trial involved 99 centres in 15 countries and 92 Canadians, including 67 from the Edmonton region and 25 from the Toronto area. The study examined how heart attack patients fared 30 days after one of the treatments—half of the patients were treated with a strategic approach with clot-busting drugs within three hours, followed up by an angioplasty; the other half had angioplasties within the three hours. Armstrong and his colleagues looked at the patients’ mortality rates, and the likelihood of shock, heart failure and recurrent heart attack. During the study, the team discovered a slight increase in bleeding with the clot-buster approach, which was counterbalanced by a trend toward less shock and heart failure in those patients. The mortality rates were similar.

The official name of the study was the Strategic Reperfusion Early After Myocardial Infarction (STREAM) study.

Armstrong and his colleagues will continue their work with this study, exploring additional data about heart muscle damage, seeing how patients fared one year after treatment, and examining which patients fared the best long-term. They expect these results will be published in about one year.

The study was funded by Boehringer Ingelheim. The findings were published in the peer-reviewed New England Journal of Medicine March 9 at the same time that Van de Werf presented the highlights at the American College of Cardiology conference.