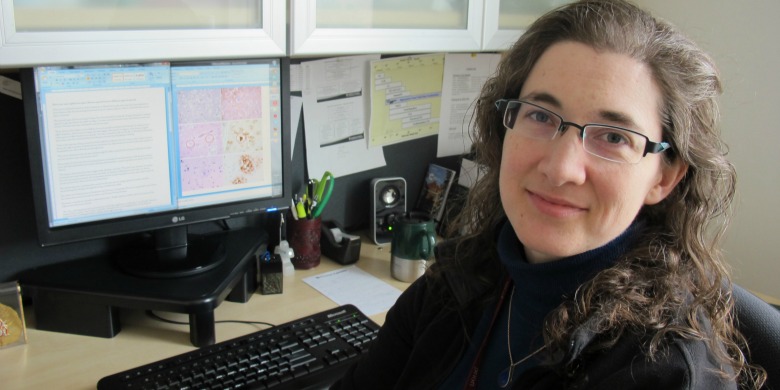 130312-valeriesim-banner
UAlberta neurologist Valerie Sim and her research team discovered that a minuscule change in prions’ makeup appears to give prion diseases the ability to adapt and spread to different types of animals.

(Edmonton) Medical researchers at the University of Alberta have made a discovery that may explain how prion diseases, like chronic wasting disease and mad cow disease, adapt in order to spread between various types of animals.

The research team, led by neurologist Valerie Sim, discovered that a minuscule change in the prions’ makeup appears to give the disease the ability to adapt—to mimic and recreate new strains with which it comes into contact. The team has been studying this area for two years.

“Prion diseases don’t always successfully go from one animal to another, but when they do, the process is called adaptation. And we want to figure out what triggers that process to happen, what changes happen within prions to allow the disease to spread,” says Sim, a researcher with the Faculty of Medicine & Dentistry, whose discovery was recently published in the peer-reviewed Journal of Biological Chemistry.

“One of the important things researchers in this field have realized is that if you pass certain strains of prion disease through a number of different hosts, the disease can adapt along the way and increase the number of susceptible hosts. That’s the big concern right now.

“We want to determine why one prion disease might be able to spread from one type of animal to another and why another strain of the disease can’t.”

For instance, if a deer with chronic wasting disease is scavenged by another animal, could the prion disease cross into that intermediate host, evolve and then infect animals or species typically not at direct risk for the disease?

“We hope to understand how these bigger issues develop,” says Sim. “We need to pay attention to chronic wasting disease in particular because it has the ability to spread in a different way than mad cow disease. Chronic wasting disease prions can be deposited into the soil and stay there for years, and could be eaten by another animal. How does it evolve from there?”

Sim and her team are continuing their research in this area and are seeing impressive results in the lab, reconfirming their findings through the testing of additional models.

Sim works in the Department of Medicine in the Division of Neurology. She is cross-appointed to the Centre for Neuroscience and the Centre for Prions and Protein Folding Diseases.

“Dr. Sim’s achievements in prion research are of particular significance to Albertans,” says Pamela Valentine, acting CEO of Alberta Innovates – Health Solutions. “She is truly a world-class researcher and we are delighted that our funding was instrumental in recruiting her back to Alberta nearly eight years ago.”