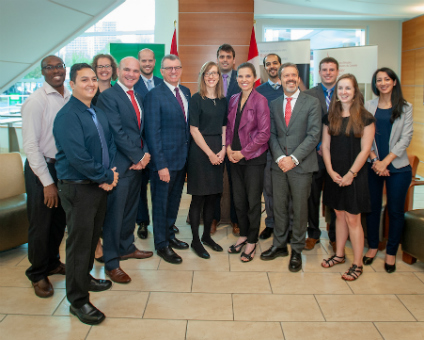 Science and Sport Minister Kirsty Duncan, Edmonton Centre MP Randy Boissonnault, U of A president David Turpin and U of A vice-president of research Matthias Ruth were on hand to congratulate recipients of the Vanier Scholarships and Banting Fellowships. (Photo: Richard Siemens)

Former corrections officer among 12 promising U of A researchers receiving prestigious graduate and post-doc scholarships. 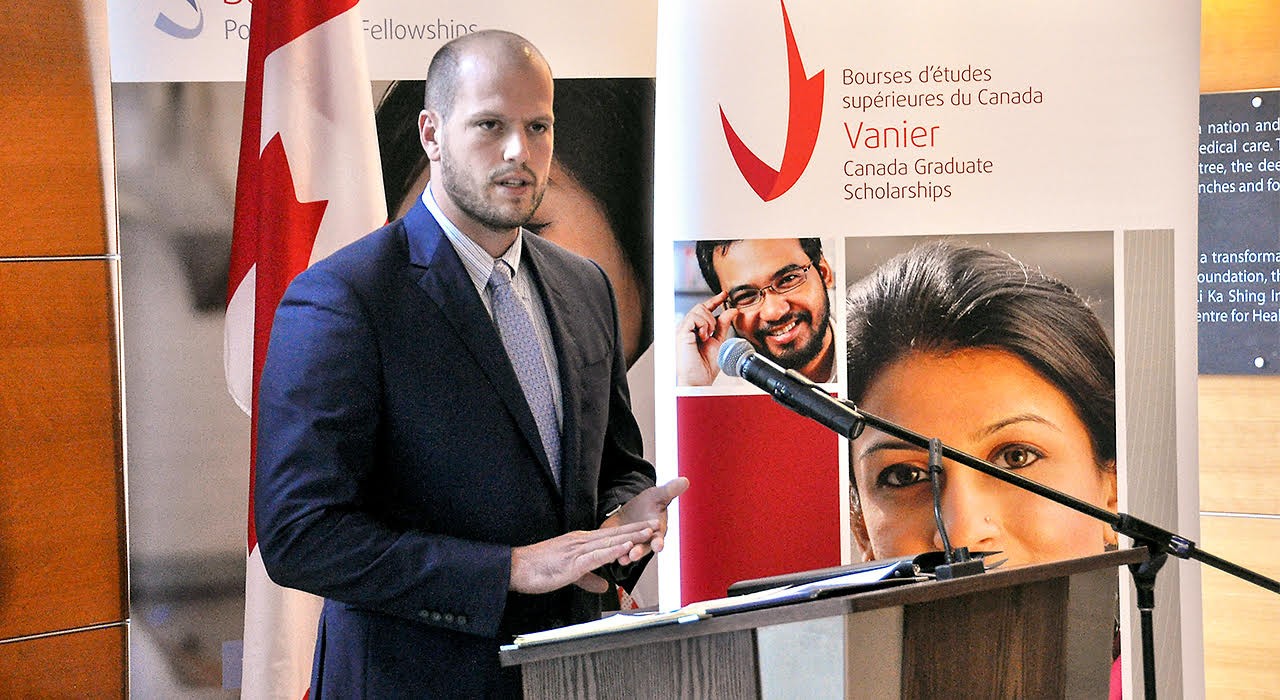 Criminology graduate student William Schultz relates his experiences as a former corrections officer at an event today announcing 10 U of A recipients of the national Vanier Canada Graduate Scholarships, along with two winners of Banting Postdoctoral Fellowships. (Photo: Michael Brown)

William Schultz was just 20 years old the first time he saw someone overdose on fentanyl.

The University of Alberta graduate student and Vanier Scholarship recipient was a correctional officer then, and the victim was one of the prisoners on his unit. It was a simple incident that, according to Schultz, has become all too commonplace in prisons everywhere.

“He waited until he was alone, ingested the powerful opioid and almost immediately went into cardiac arrest,” remembered Schultz, who, with the help of colleagues at the prison, managed to save the man’s life.

“Unfortunately the next prisoner wasn’t so lucky.”

The morning after that body was found, Schultz said a friend of the deceased described to him the events of the fateful night before.

“He told me, ‘It was crazy, boss, we each snorted a line and sat around joking about how unpredictable this shit is. I woke up, he didn’t.’”

That was back in 2010 and fentanyl was still years away from becoming a household word. According to Alberta Health Services, from January 2016 to November 2017, there were roughly 122 suspected overdoses in Alberta’s correctional facilities alone. Of those, 95 per cent were likely due to opioids, most likely fentanyl.

When Schultz left prison work in 2015, he came to the U of A as a grad student and joined with criminology researchers Kevin Haggerty and Sandra Bucerius working on the U of A Prisons Project. The research study has them visiting Western Canadian prisons to interview both prisoners and officers about life in jail.

“[The opioid crisis] challenges almost every aspect of prison operations,” he said.

Schultz explained his initial research has been enlightening as first-hand accounts about this game-changing drug behind prison walls have ranged from correctional officers expressing concerns about being exposed to fentanyl during their daily routine activities to tales from prisoners about the time they “died” from a fentanyl overdose within the prison.

“The overall impact of fentanyl within the prison setting is so substantial that, in all honesty, I can no longer claim that I did the same job as people who work in prisons right now, and it has only been three years since I left.”

Schultz was among 10 U of A Vanier Scholarship winners, each of whom received $50,000 per year for three years.

And while he said the Vanier funding has allowed him to pursue his research at the highest level, he noted his biggest contributions he makes are out in the community.

The Vanier recipients, along with two Banting Postdoctoral Fellowship winners each receiving $70,000 annually for two years, were announced by Kirsty Duncan, Canada’s minister of science and sport, at an event on North campus today.

“Our greatest hope lies with the ambitions of the next generation of Canada’s researchers,” said Duncan, who was joined by fellow member of Parliament Randy Boissonnault and U of A president David Turpin in making the announcement. “Their curiosity and desire to collaborate will lead to new medical treatments, health-care programs and social innovations that will strengthen our economy and support a growing middle class.”