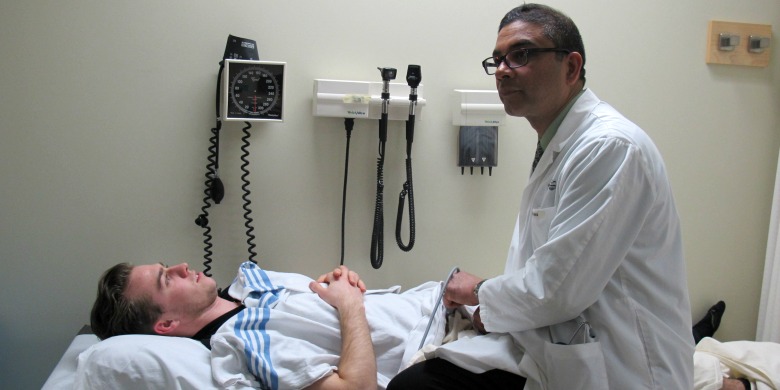 130403-saifee-rashiq-banner
Saifee Rashiq and his colleagues at UAlberta analyzed previous studies of "nerve block" techniques to find out which methods best serve patients who need surgery for hip fractures.

(Edmonton) Anesthesiologists now have more direction for treating patients who have broken their hip and are undergoing surgery.

In the first study of its kind, researchers and physicians at the University of Alberta’s Faculty of Medicine & Dentistry have identified a type of nerve block that best serves patients who have broken their hip and require surgery.

Saifee Rashiq, with the Department of Anesthesiology & Pain Medicine, said that anesthesiologists have long been freezing the nerves of patients just about to undergo surgery in an effort to improve their recovery and decrease pain after the operation. But there are many types of nerve blocks that can be done, and no literature backing which is best.

That’s why Rashiq, along with Donna Dryden and Ben Vandermeer in the U of A Evidence-based Practice Center, decided to do what’s called a network meta-analysis of previous studies on the subject to rank the best nerve-block techniques.

“This is important for doctors because some of these nerve blocks are easier to do than others and some are more reliable than others,” said Rashiq. “Before you embark on something that’s a bit more difficult and more time-consuming, you want to make sure it’s actually going to make a difference. In the past people have speculated, well, maybe it’s better not to bother doing these because it doesn’t make any difference—we’ve put that to rest.”

Two techniques topped the list and both are relatively easy to perform. One emerged as the most likely to reduce post-operative pain, but more important was that the other technique, which takes less than two minutes to perform, reduced the chances of the patient getting delirium, which can be very detrimental to the patient’s progress and can sometimes even lead to death.

“One of the problems when you’re in severe pain is that we have to load you up with drugs, and that can cause delirium,” said Rashiq. “Elderly sick people can’t metabolize the drugs as well as younger healthy people can, so the byproducts of the drugs can cause that.”

The group says more research needs to be done, including head-to-head trials to compare the methods against each other. But for now, Rashiq says he wants his colleagues in the anesthesiology community to start using one of the top two methods.

“If everybody used these techniques all the time you could make the business of having your hip fixed a lot less unpleasant,” he said. “You could probably prevent a large number of people from having delirium, and I’m sure that would save health-care dollars.”

The study, which is published in the Canadian Journal of Anesthesia, was funded by the U.S. Agency for Healthcare Research and Quality through its Evidence-based Practice Center Program.