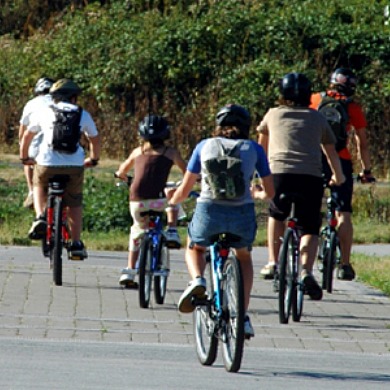 (Edmonton) New research from the University of Alberta shows that bicycle helmet legislation is having the right kind of impact on head injuries.

For the study, recently published in the Journal of Accident Analysis and Prevention, the researchers scrutinized Alberta Health data on hospitalizations and emergency department visits before and after helmet legislation was introduced. They looked at data from February 1999 to March 2007 involving child, teen and adult cyclists. To control for general trends in traffic injuries, the researchers included data on pedestrian injuries.

“We found that the number of head injuries in emergency department visits increased marginally for adults after legislation was introduced, but that’s probably attributable to the increased profile of and sensitivity to concussions in the past few years,” he added.

“When an adult hits their head, they’re more likely today to be concerned about concussions and get checked out, but less likely to be hospitalized.”

Voaklander says this research is contrary to the results of other research—and to the views of helmet legislation critics who suggest enforcing helmet use doesn’t reduce head injuries.

“The existing published research could reflect a cultural bias because it is published in journals from countries where the discussion on the importance of helmet legislation hasn’t yet happened, and likely won’t, given the “share the road” culture that exists between drivers and cyclists in these countries,” he said. “It seems to be much safer to cycle in places such as Europe, so the need for people to wear helmets may not be as great.”

According to Voaklander, critics (including bicycling groups in Edmonton) have argued that such laws actually contribute to obesity and global warming by deterring people from biking because they don’t own a helmet or don’t want to wear one. He adds that there is currently a lot of pressure on cities to add drop-off bike programs, allowing people to borrow and return bicycles at various locations throughout the city. According to advocates, these programs help combat obesity and reduce global warming, but Voaklander notes that the bikes available through these programs don’t come with helmets. This results in a corporate interest in encouraging people to cycle, but not necessarily to cycle safely.

“The contention that people will cycle less if you make them wear helmets is unproven—in fact, cycling rates have gone up in Canada over the past few years,” Voaklander explains. “Now, it seems that a public health intervention is being incorrectly blamed for causing other public health problems.”

Voaklander says the research presents definitive evidence that helmets remain an important injury prevention strategy. He plans to conduct similar research in St. Albert, where a municipal law dictates that helmets must be worn by everyone, and compare the results with those from the rest of the province.

“In these situations, we need to put the desire for cycling-group membership or corporate investment aside and focus on the data. It’s the data that will tell us what interventions are working and are helping people lead healthy, active lives.”