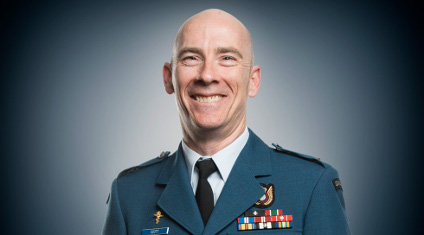 Roger Scott, who graduated yesterday with a PhD in nursing, found that sexual orientation was not a significant predictor of depression.

A new study shows that sexual identity is not linked with depression. The research breaks stereotypes and has implications for health care and the military.

A new study examining the link between sexual orientation and depression flies in the face of conventional wisdom.

In a series of recently published papers, Roger Scott, who graduated with a University of Alberta PhD in nursing yesterday, showed that sexual orientation was not a significant independent predictor of depressive symptoms overall. In fact, he demonstrated that gay men reported lower levels of depressive symptoms than heterosexual men in one study group.

The key to his research was pulled from the U.S. National Health and Nutritional Examination Survey, in which respondents were asked about their sexual orientation and sexual behaviour. Not only was Scott able to identify people as straight, gay, lesbian or bisexual, he could also identify them by their sexual activity and the sex of their sexual partners.

“We actually found that the gay male group had a lower rate of depression than the straight male group. That made us wonder, ‘Now why would gay men have lower rates of depression?’ You start wondering about the resilience you develop through the coming-out process.”

“What we think this study is pointing to is the fact that there is a disconnect between what you’re putting out there to the world and what you’re actually doing,” said Scott. “These results suggest that being closeted or not being comfortable with your sexual orientation is harmful.”

The Canadian version of the survey, which lacked the sexual behaviour piece, reinforced the U.S. results, with the exception that it showed no difference in mental health between gay and straight men.

“Potentially, that could be cultural. Canadian culture has been more open to sexual orientation. It’s not as extreme as far as discrimination. As Canadians, we have been ahead of the curve,” said Scott.

The third survey, which was completed by members of the Canadian Armed Forces, backed up what Scott had previously found, with the exception that it uncovered a slightly higher risk for depression in gay men.

“Our military has really good policy in place, but policy doesn’t always translate into what the actual workplace is,” said Scott. “It could also be lack of communication to a gay community, which has shown to be helpful.”

Scott decided to pursue this research topic in the aftermath of the string of LGBTQ youth suicides in 2010 that gave rise to a number of anti-bullying movements, the highest-profile of which was the It Gets Better campaign.

“I saw all that and wondered, ‘Does it really get better?’” said Scott.

Scott said his findings are good news for everyone to know “it’s not all doom and gloom”—and for health-care clinicians, for instance, who are told to screen people at risk for depression.

“If you’re screening people who are thought to be at risk but who are not at risk, then you’re wasting everybody’s time,” said Scott. “It also suggests that we need to look at the mental health of people more discretely–let’s look at all the issues separately rather than lumping them all together. Maybe there are some mental health issues that are higher prevalence in particular populations that need addressing.”

Depression in lesbian, gay, and bisexual members of the Canadian Armed Forces