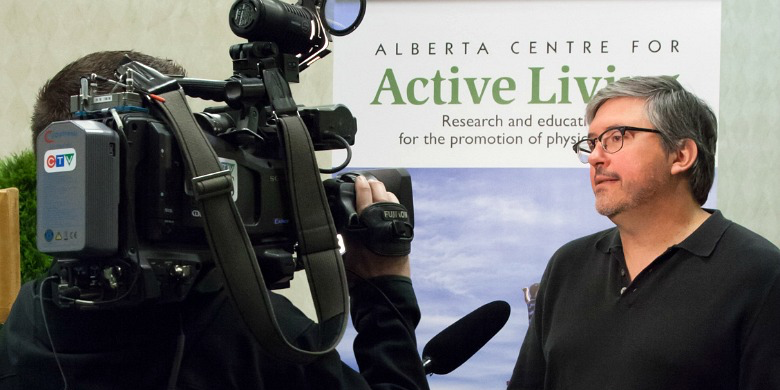 (Edmonton) The average adult is sitting or sedentary for about 9.5 or 10 hours a day—and a University of Alberta researcher wants people to stand up and take notice.

“The norm of sitting needs to be challenged,” said John C. Spence at the 2014 Physical Activity Forum hosted by the Alberta Centre for Active Living at the Lister Conference Centre May 6.

Spence, senior research associate with the centre, associate dean of research in the Faculty of Physical Education and Recreation and adjunct professor in the School of Public Health, suggested there is a real need to develop solutions or interventions in workplaces, schools and homes to combat the high levels of sedentary behaviour among Albertans and Canadians.

“For instance, workplaces can promote a culture shift to allow for more standing desks, more walking meetings and active breaks,” he said. “For schools and parents, promoting more active play among children is a great way to reduce the amount of sedentary time and screen time for kids.”

What is sedentary behaviour?

Spence noted one way to define “sedentary” is that a person spends most of their time sitting or reclining and takes less than 5,000 steps a day.

“There are different ways to approach a definition for sedentary behaviour, but in general, research has provided ample evidence to show that leading a sedentary lifestyle negatively impacts health—even if a person meets recommended levels of physical activity, such as those set out in the Canadian Physical Activity Guidelines.”

Among other research efforts, Spence contributed to the development of the Canadian Sedentary Behaviour Guidelines for the Early Years, published in 2011. He noted that excessive sedentary time is associated with metabolic risk, reduced bone health, some forms of cancer and reduced mental health.

He also said research has shown that too much sedentary time for children and youth contributes to poor self-esteem, weak academic performance, obesity and increased aggression.

Standing up for solutions

“Part of the problem is that we are unaware of how much time we are spending sitting. Plus, many of the environments where we live, study or work are set up to reinforce or even require sitting for long periods,” said Spence.

Spence offered a range of insights and possible interventions, but he suggested that even adopting a few simple approaches will help people to move more:

Spence also suggested alternatives for people with mobility issues or who are unable to stand, such as doing upper-body movements or exercises.

“The focus, going forward, needs to be on making personal, cultural and organizational shifts that help standing more and moving more to become the new normal,” said Spence. “We also should attempt to break up those really long periods of sitting. Getting up and moving about at least once or twice an hour is a critical first step.”