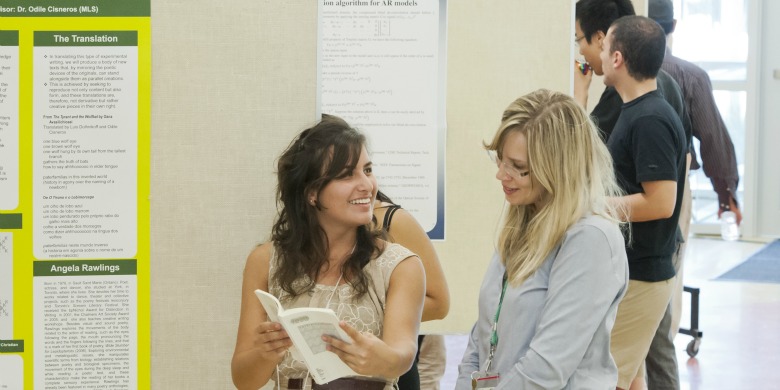 120802-helenacurycunha-banner
Helena Cury Cunha (left), a student researcher from Brazil, was one of 78 students from five countries who presented research they worked on at UAlberta during a poster symposium Aug. 2. (Photo: John Ulan)

(Edmonton) Some of the world’s youngest and brightest student researchers have spent just over a month at the University of Alberta, where Lorne Babiuk, vice-president (research), says they’ve had an opportunity to share the university’s resources and talents through an international research internship program. On Aug. 2, the 78 undergraduate and graduate students from five countries presented research they worked on at the U of A during a poster symposium at the Centennial Centre for Interdisciplinary Science.

The program demonstrates the university’s commitment to engaging with the international community while helping to resolve some of the world’s pressing issues, Babiuk says.

In this case, the university provides those opportunities by bringing some of the world’s brightest young student researchers here and connecting them with U of A researchers whose work will contribute to solving issues of global concern and advance cultural understanding.

One young researcher, Helena Cury Cunha from Brazil, worked with Odile Cisneros, a U of A professor in the Department of Modern Languages and Cultural Studies, to help satisfy a Brazilian hunger for Canadian experimental poetry by producing the first-ever bilingual anthology, gathering works by 24 Canadian writers.

The duo promise to “produce a body of translations that will make this cutting-edge writing known and appreciated internationally, specifically in Brazil, the largest country in Latin America.”

Nursing researcher Gina Higginbottom is trying to find out the health-care challenges pregnant migrant women are facing, a quest that has taken her to Brazil, where she has formed partnerships that will help strengthen nursing practices in that country. Brazilian nursing student Natalia Canella Sanches worked with her to advance research methods that will help to identify those challenges.

“For example, our research question is whether immigrant women find it difficult to use the health-care system in Canada,” Sanches says. “We can then use software that would help us interpret and analyze data from the responses to that interview question.”

Higginbottom says Sanches’ experience here will help at her university in Brazil. “She’s going to be the contact person for the whole of her campus,” Higginbottom explains. “This is immensely important. Brazil has a great need for methodological and theoretical research in order to build the infrastructure of the country to match the increasing wealth. Natalia would be able to advance methodological understanding in the Brazilian context of the software that we use, and to become a role model and a mentor.”

Another Brazilian student, Gabriel Ferreira Serra, has been working with U of A industrial design researcher Robert Lederer to develop the Smart Pillbox—a device that would remind people to take their medications.

“People with amnesia and dementia are always forgetting to take their medication, and if they do not take their pills one day, they could have a serious problem,” says Serra.

He says part of the device is a wristband that holds the pills and is equipped with sensors that vibrate to inform the wearer when it’s time to take their medications. The band is programmed on a base unit, which users could use to program the times they wish to be reminded to take their pills.

He says he chose the U of A because the university presented him with a chance he’s been looking for.

“I was searching for a program in industrial design in Canada and found that this university is really great, and the program here is focused on medicine. They have a lot of projects with the Faculty of Medicine & Dentistry, and with people from computing science. That’s why I chose to come here, because I’d have the opportunity to work with people not just in industrial design, but in other areas.”

The program responds to a global need that should be met if societies are to successfully tackle issues they’re facing, says Randy Goebel, computing science professor at the U of A and chair of the Alberta Innovates Academy, who applauded the students for coming here.

“We can no longer survive in isolation,” Goebel says. “Nobody can solve all the world’s problems. So collaborations about scientific ideas and developments are naturally fuelled by these kinds of exchanges; they keep smart people moving around and collaborating in different cultures and environments to be able to generate more intellectual capital in higher quality.”