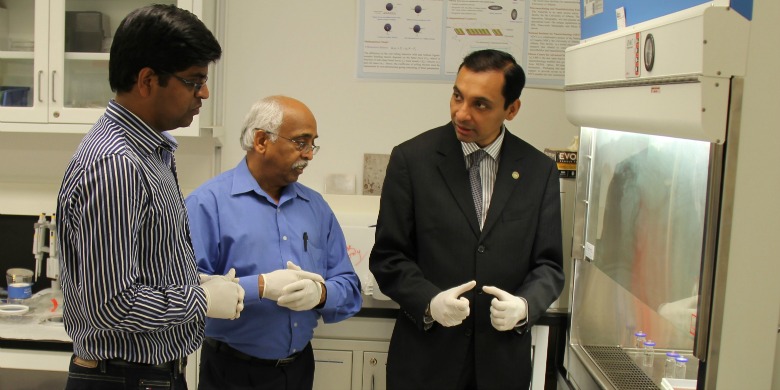 (Edmonton) A research team from the University of Alberta has made a public health breakthrough by developing a device that detects E. coli bacteria in water much faster than previous methods.

Mechanical engineering professor Sushanta Mitra’s team developed a sensor capable of detecting the potentially deadly bacteria in minutes—clearly improving on existing technology, which takes 24 to 48 hours to do the same job.

The team hopes to tie the new test to cellphone technology to alert health workers and members of the public that a water source is contaminated. The team is working with an Indian partner, Tata Consultancy Services, to make the device capable of setting off an alarm. The idea is that when the new sensors detect E. coli, text message alerts in the local language would be sent to public health workers and people who rely on wells for drinking water.

The device was tested on wells at remote communities in India (Khadavli, Mumbai) this summer by Mitra and graduate student Naga Siva Gunda. The project was funded by Alberta Enterprise and Advanced Education following extensive planning by Mitra with researchers, institutes and industry from India.

Working with community health workers in India, Mitra’s team tested water wells in different communities, each of which can serve hundreds of families. Although the water is typically treated with chlorine, the procedure is not implemented properly and bacterial infections still occur.

“In order to have technology for the masses, it needs to be frugal—and this is a frugal innovation,” Mitra said.

The World Health Organization estimates that one billion people worldwide do not have access to an improved water supply at all, and more than two million people die each year from diarrheal diseases caused by unsafe water.

The new sensor could have a huge impact on public health by preventing water-borne illnesses.

“It feels extraordinary—the satisfaction is beyond words because of all the people this can touch,” Mitra said, adding that the team is returning to India next week to conduct further tests.

Mitra says the goal of the sensor is to “make it a cheap ‘go/no-go’” type of device. “The level of E. coli and total coliforms in these wells is very high. An early warning device will make end-users aware of potential pathogen in water,” he said.

The sensor is a filter that traps E. coli. Coated with a chemical solution created in Mitra’s lab by research associate Raj Naicker, the filter changes colour in the presence of the deadly bacteria.

The testing was successful in large part because Mitra and his team created an effective test bed for their sensors, including the King Edward Medical College, which is responsible for the Public Health Centre at Khadavli, and Tata Consultancy Services for providing the software support for the sensors to communicate with the wireless cellphone network.

“It’s critical having this test bed with all of the partners involved,” Mitra said. “This couldn’t be done any other way—we need these players to be involved to deploy game-changing technologies at a very cheap cost. Also, this is one good example of true translational research, which our province is very actively advocating for.”