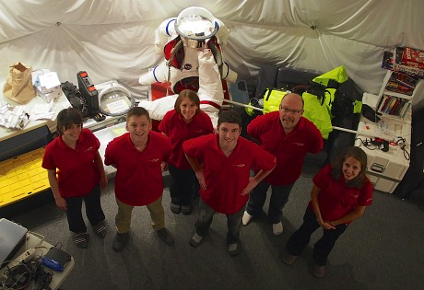 Research uncovering the mysteries of the Red Planet

UAlberta research helps advance our understanding of Mars and its potential for life, paving the way for future space missions. 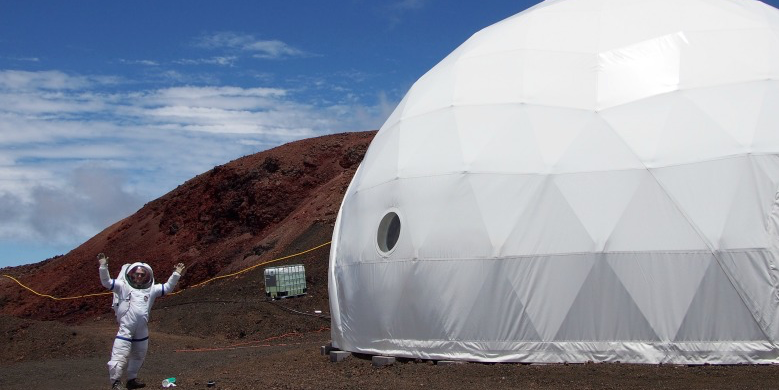 Ross Lockwood at the simulated Martian environment on a volcano in Hawaii (Photo: Casey Stedman).

(Edmonton) Standing on the red, impact-scarred surface of Mars was the childhood dream of many grown-up scientists, but few have experienced a space adventure quite like Ross Lockwood.

The PhD candidate in condensed matter physics at the University of Alberta is among six researchers currently camped 8,000 ft. above sea level on the side of a Hawaiian volcano specifically chosen for its remoteness and likeness to the Red Planet. His efforts are just one example of research by U of A scientists working to advance our understanding of Mars and its potential for life, paving the way for human missions to our sister planet.

“It’s easy enough to imagine that we actually are on the surface of Mars,” says Lockwood from the domed habitat that will be his home for fourth months, part of the Hawaii Space Exploration Analog and Simulation, or HI-SEAS. “At the end of the day, though, as I lay down in bed a thought always comes to mind: this is as close as it gets, short of actually being on Mars.”

HI-SEAS is a NASA-funded University of Hawaii project aimed at understanding the psychological effects of an extended space mission like a trip to Mars. Since his arrival about five weeks ago, Lockwood and his colleagues, selected from a field of 700 applicants, have been living in a 900-sq.-ft. dome. When they do leave the habitat, they must don protective spacesuits, part of the high-fidelity experience.

Lockwood’s role as a “SMars” astronaut is crew technologist and systems engineer, ensuring communications systems work properly and monitoring power and water consumption. The experience is the realization of a dream that started in Lockwood’s backyard in Winfield, B.C., where parents Janet and Ron were amateur astronomers who inspired him to reach for the stars—or at the very least, observe them.

That passion propelled Lockwood to a bachelor of science degree in honours physics from the U of A, where his studies in condensed matter physics focus on laser technologies and how they interact with matter. He also spent four years teaching at the U of A Observatory and volunteering at the Space Academy summer camp, run by the Institute for Space Science, Exploration and Technology (ISSET).

The SMars crew has already dealt with situations that could occur on a real mission to Mars, such as spacewalks to investigate a faulty water sensor. Much of the work requires a degree of improvisation, he says, with the entire experience opening his eyes to the complexity and difficulty of executing a successful mission. So far, the crew is in good spirits.

Putting the final touches on his PhD remains Lockwood’s priority upon returning to Edmonton, but he isn’t ruling out future efforts to advance our understanding of space exploration, including becoming an astronaut.

“The HI-SEAS mission is another huge step along the path to becoming an astronaut, and I’ll continue down that path as far as it will take me.”

Christopher Herd’s childhood also was filled with dreams of making discoveries about Mars and other planets. His father was a geologist, so naturally he turned to space rocks to dig into billion-year-old cosmic mysteries—all relating to the possibility that life has existed somewhere other than Earth. 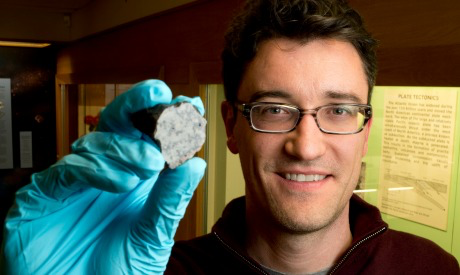 “For me, the idea of studying a completely different planet was very attractive,” said Herd, now an associate professor in the Department of Earth and Atmospheric Sciences, co-founder of ISSET, and internationally renowned expert on meteorites.

One of the most famous samples he studied, a Martian meteorite called Tissint that landed in Morocco, contained hidden clues about the Red Planet’s atmosphere in the form of gases trapped inside the rock.

“Mars is Earth-like in some ways but in other ways it’s not. I think of planets almost as experiments that have been running for 4.5 billion years,” said Herd, explaining that the Earth, moon and Mars have evolved down distinctive paths.

One of the major geological differences between Earth and Mars, says Nicholas Castle, a PhD student and geologist who came to the U of A to learn from Herd, is the absence of plate tectonics in the smaller planet. On Earth, plate tectonics continually stir up the mantle, reintroducing portions of the crust, making for a very different chemical signature than that of Mars, where most of the mantle is depleted.

The U of A’s Meteorite Collection is the largest university-based collection in Canada with more than 1,100 samples, including a dozen samples from Mars—most about the size of a dime, says Herd, curator of the collection. The samples are so rare, researchers create synthetic versions containing the same chemicals as the original sample. These are then melted down in a 1,400 C furnace, slowly allowing the molten mixture to cool and crystallize, much like lava flowing to the surface of Mars millions of years ago. These experiments provide contrast and context to rock samples gathered on Mars by rover missions, he said.

The one thing that’s eluded geologists is the chance to collect a “cache of goodies”—core samples from Mars, which is one of the aims of NASA’s Mars 2020 mission. Herd has been part of international collaborations to look at the science of sealing and preparing samples for the return trip to Earth.

“From a scientific perspective, making sure those samples get back in one piece without being compromised in the process is very complex.”

Unlike Lockwood or Herd, Carlos Lange never dreamed of exploring space, yet he’s a pioneer among Canadian scientists for his work to improve our understanding of wind speeds and directions on Mars, a key ingredient to finding water. 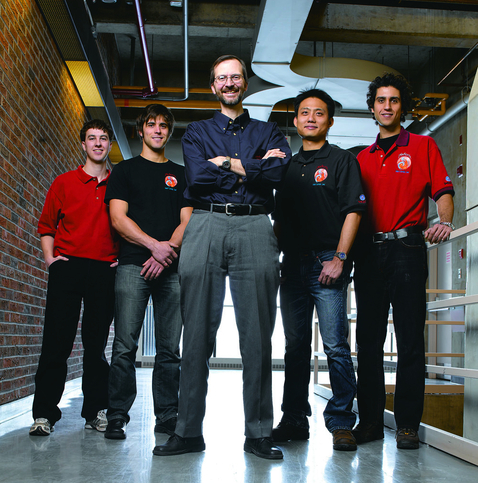 Carlos Lange (centre) inspires the next generation of space researchers to reach for the stars. (Photo: Darren Jacknisky, Bluefish Studios)

Lange, a professor of mechanical engineering, conceived the idea for the Telltale, a wind sensor capable of moving with the thin Martian winds so patterns could be captured on camera. The sensor, developed and designed by researchers at Aarhus University in Denmark, was attached to NASA’s Mars Phoenix Rover, one of the most successful missions to date.

A chance encounter with a researcher at a medical conference led to Lange’s recruitment to Phoenix. He had no background in space science but was sought after for his research into wind modelling, working with aerosols, lungs and wind tunnels.

Suddenly, he became a pioneer for his field—the lone engineer among Phoenix’s 70 international scientists.

“People never thought of engineers as being part of the research,” said Lange. “Before, it was basically geologists and atmospheric scientists telling engineers to supply the instrumentation.”

It took four years of work to develop, design and build Telltale so it could withstand the rigours of an interplanetary odyssey. Inspired by a device used to help sailors adjust their sails, Telltale not only broke ground for the data it captured about Martian polar winds—information needed to better understand climate and water cycles on the planet—but it also did the same for engineers joining space research missions.

“Slowly, engineers have found a role at the table within the science team,” said Lange, who predicts even more opportunities for engineers in space research, particularly with the rise of high-profile private missions such as SpaceX, Moon Express and Mars One.

Since Phoenix, Lange has maintained an active interest in space-related research, including co-founding ISSET with Herd. Its creation, he said, has drawn together researchers and interests across disciplines on campus, attracting future graduate students, educating children in the community and inspiring the next generation to reach for the stars. Some even volunteered to work with Lange on Phoenix and proposals for other space-related research projects, including Mars 2020.

“Space is a powerful motivator for students to keep studying, to see value in the difficult topics we make them study. They see that what we are learning can be applied to complex projects.”

Research uncovering the mysteries of the Red Planet