Researcher embeds with Canadian Forces to study stress and coping 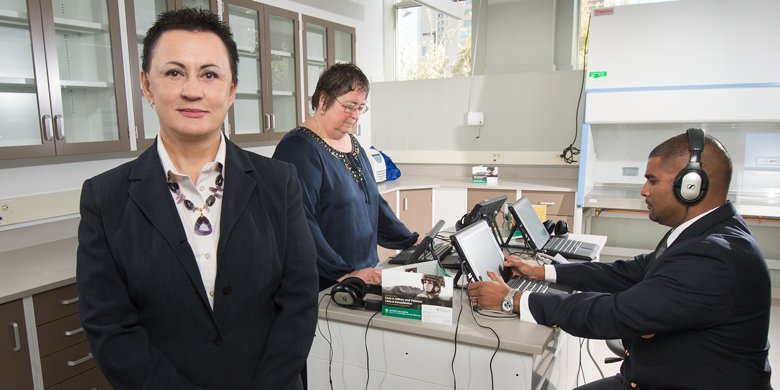 130924-ibolja-cernak-banner
Ibolja Cernak (left) will spend the next month embedded with members of the Canadian Armed Forces serving in Afghanistan, to study how soldiers cope with stress while under deployment. Her research aims to help increase soldiers' resilience and improve their quality of life. (Photo: Richard Siemens)

(Edmonton) A University of Alberta researcher will spend the next month working shoulder-to-shoulder with members of the Canadian Armed Forces in Afghanistan to study how soldiers cope with stress while under deployment.

The tour is part of a larger study to see how soldiers and veterans cope physically and emotionally before, during and after deployment. Understanding their resilience will help researchers develop preventive therapies to reduce soldiers’ susceptibility to injury or mental illness—ultimately improving their quality of life.

Ibolja Cernak, Canadian Military and Veterans' Chair in Clinical Rehabilitation at the University of Alberta, said mental health, concussions and low-back pain are the top three health issues affecting soldiers and veterans. In the case of mental health and concussions, often when symptoms manifest it’s too late to restore function.

“Mental health and neurological issues from concussions develop very slowly and then suddenly all the mechanisms underlying these problems become so powerful, soldiers and veterans cannot keep a lid on them,” said Cernak, a world-renowned expert on blast-induced neurotrauma with the Faculty of Rehabilitation Medicine.

“Our goal is to intervene earlier with pre-emptive rehabilitation to help soldiers, veterans and their families retain a sense of normalcy and maintain their quality of life. We do not want to wait for problems to fully develop.”

Prevention is the key

Some 120 Canadian soldiers from CFB Edmonton and CFB Shilo volunteered to participate in the study. Cernak’s team started by completing baseline tests before deployment. Researchers measured how long it takes soldiers to analyze situations around them, responses to visual stimuli, memory, their ability to control impulses, and how they process emotions, which affects how they interact with others.

Participants also completed questionnaires, offering self-reported insight into things such as factors that keep them going, and about their quality of life. Cernak said soldiers also provided biological samples such as urine and saliva, which quantify how their body copes with stress by measuring indicators like stress hormones and enzymes.

Cernak’s team will conduct the same tests on the same group in Afghanistan, where soldiers experience increased stress from unfamiliar lifestyle arrangements, changed nutrition, sleep deprivation and displacement from loved ones. Additional tests will be completed upon return from Afghanistan and again at six months, one year, three years and five years.

Shoulder-to-shoulder with military and veterans

The trip marks the first time a U of A academic has travelled to a war-torn country, and the first time anyone has worked alongside soldiers, in the same living conditions.

“The trust the military has shown in me is huge and very rewarding at the same time,” Cernak said. “It’s not only trust personally in me and the program, it’s the trust of the Canadian Armed Forces in science, that science and evidence can help.”

“The health and welfare of soldiers is of paramount importance to the Canadian Armed Forces. We have comprehensive support programs in place to assist our members in dealing with challenges of deployment,” said Maj. James Caruana, 3rd Canadian Division Headquarters.

“However, by partnering with Dr. Cernak we will be able to focus through a span of pre-deployment, deployment and post-deployment phases on the provision of a comprehensive overview of how our soldiers deal with stress. In essence, the results of the study may be used to gauge the overall well-being, preparedness and stressors of the soldiers through the various phases, and offer insight into appropriate training and screening.”

The study was made possible with support from funders such as True Patriot Love, the late Harry Hole and the Royal Canadian Legion Alberta–NWT Command.

“The approach of understanding the whole person and not just the injury struck a deep chord with our members,” said Donner. “Dr. Cernak’s research offers not only hope to those currently serving and their families, but also insight for those who are no longer serving. We are very proud that this research is being conducted by the U of A.”

In the future, Cernak said, she’d like to expand the study to include more participants, including veterans, first responders and those who work in high-stress occupations such as mining and oil and gas, among others. Studies like these involve analyzing massive quantities of data, which is both time-consuming and expensive and would require additional funding.

“It’s never too late to join the study,” said Cernak. “The more data we collect, the greater our chances of understanding the origins of operational stress injuries and developing innovative rehabilitation for our military and veterans, and those who work under high-stress conditions.”