This graphic shows the possible geography of the Iapetus Ocean in a series of snapshots from the Cambrian Period (about 530 million years ago) until the Late Ordovician Period (about 450 million years ago). The continent Laurentia, which formed the core of modern North America, is shown in blue. Yellow colours represent Baltica, which became Scandinavia and Eastern Europe. Shades of pink and magenta represent parts of Gondwana, which was located over the South Pole in the Cambrian Period and included modern South America and Africa. The red and orange fragments are pieces of Gondwana that found their way into the Appalachian and Caledonide mountain ranges, including much of Atlantic Canada and portions of Great Britain and Ireland.

Researcher finds clues to mystery of birth and death of oceans 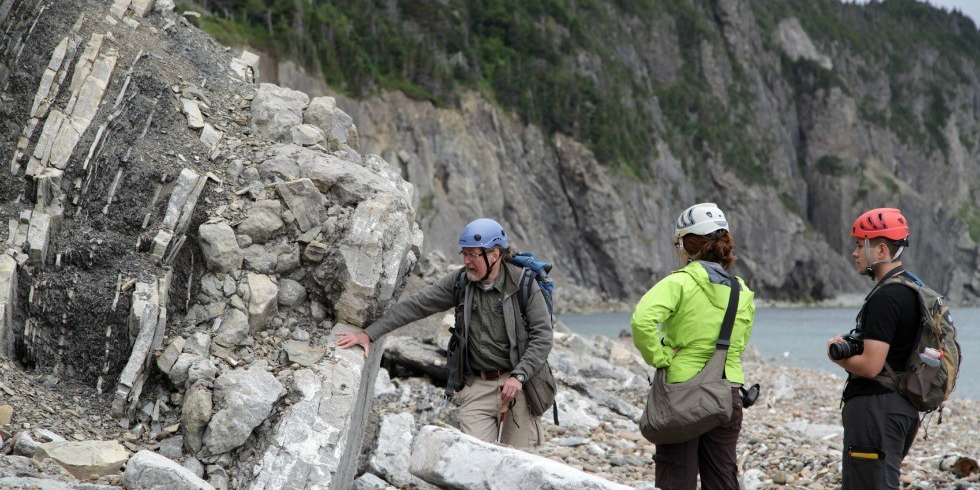 (From left) John Waldron with graduate students Shawna White and Ryan Lacombe examining sea-floor sediments formed during the closing of the Iapetus Ocean, now uplifted and exposed at the foot of the steep cliffs of the Port au Port Peninsula in western Newfoundland.

(Edmonton) Pangea, the supercontinent that contained most of the Earth's landmass until about 180 million years ago, endured an apocalyptic undoing during the Jurassic period, when the Atlantic Ocean opened up. This is well understood. But what is less clear is how Pangea came into being in the first place.

Earth and atmospheric sciences professor John Waldron in the University of Alberta's Faculty of Science, along with three colleagues in Atlantic Canada and the United Kingdom, recently described a new model for the events that led to the closing of ancient oceans and the formation of Pangea. The scientists outline their findings in a paper published in the journal Geology.

According to Waldron and his fellow authors, the answers may be found in the best known of the ancient oceans, Iapetus, which lay between the ancient core of North America and parts of what are now Europe, Africa and South America.

The Iapetus Ocean opened up about 600 million years ago by rifting between these continents. But just how oceans transition from opening to closing is a long-standing unsolved problem in tectonics.

Using the modern Caribbean Sea as an analogy, Waldron and his co-authors observed that at its eastern edge, the Caribbean Plate is overriding the floor of the Atlantic Ocean in a process known as subduction, which produces a zone of earthquakes and volcanoes extending from Barbados to Haiti. In another example, the zone between South America and Antarctica is also overriding the Atlantic Ocean floor.

"Most geologists have assumed that the ancient Iapetus Ocean stopped getting wider and started to shrink when subduction somehow spontaneously started up along its margins. Looking at the history of the oceans formed since Pangea, we think that just doesn't happen," explains Waldron. "It's much more likely that a small plate, like the modern Caribbean, came into the Iapetus from the east, bringing with it many small continental fragments. This helps to explain many odd features of the Appalachian and Caledonide mountain belts that are otherwise very difficult to understand."

Waldron and his colleagues suggest that the Iapetus Ocean contained a region that looked like a mirror image of the Caribbean. They have named this the Sea of Exploits, after the Bay of Exploits in Newfoundland, where fragments of this plate are preserved. A subduction zone along its edge advanced westward into the Iapetus Ocean, overriding its floor and producing earthquakes and chains of island volcanoes.

Once "infected" with subduction, the floor of the Iapetus Ocean was progressively consumed, leading to collisions between the surrounding continents that built the Appalachians of North America and the Caledonide Mountains of Scotland and Norway—and the assembly of Pangea.

Fragments of these ancient island volcanoes are preserved in Atlantic Canada and the British Isles, with folded and faulted sedimentary rocks squeezed by the ensuing collisions, which Waldron has studied with a succession of graduate students since the 1990s.

The modern Atlantic may be similarly doomed to close, in the distant future. If subduction zones like those around the Caribbean Plate continue to consume the floor of the Atlantic Ocean, eventually the continents around the Atlantic may collide to form a mountain range and a new supercontinent.

However, notes Waldron, the process is likely to take another 100 million years, so we may not be around to see it happen.