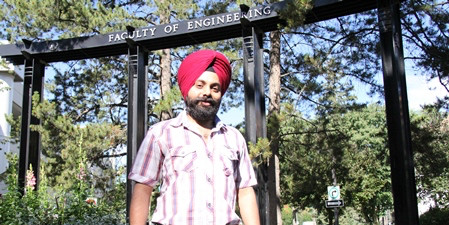 Balwinder Nimana, along with his research colleagues, is developing a computer model to account for greenhouse gas emissions from producing and transporting bitumen.

Alberta’s oilsands operations made up about 23 per cent of greenhouse gas emissions in Alberta in 2011, and are finding ways to reduce their emissions. But how do we measure emissions? And how do we know if targets are being met?

Award-winning University of Alberta graduate student Balwinder Nimana, along with his research colleagues, is developing a computer model to find out.

The model estimates project-specific emissions in oilsands activities from recovery and extraction, accounting for surface mining, steam-assisted gravity drainage, and upgrading operations. With this information, he can recommend improvements to reduce emissions.

He’s also comparing the costs of transporting products such as synthetic crude oil by rail and pipeline.

Digging through data to estimate emissions

Much of Nimana’s work involves gathering data from refereed journals, government and industry about the fuel used in oilsands operations.

Alberta's oilsands operations made up 23 per cent of greenhouse gas emissions in Alberta in 2011.

He’s using that information in a model he is developing to quantify oilsands greenhouse gas emissions including carbon dioxide, methane and nitrous oxide. Specifically, his model estimates how much diesel is used by the trucks and shovels involved in surface mining, how much natural gas is used to heat water and generate steam required to operate the SAGD wells, and how much synthetic crude oil is formed when the bitumen is upgraded.

“To reduce greenhouse gas emissions, it’s important for us to understand the life-cycle emissions associated with the oilsands compared with crude oils produced from other parts of the world,” says Surindar Singh, executive director of Alberta Innovates – Energy and Environment Solutions. “Balwinder’s research will provide a comprehensive, independent, science-based assessment to provide greater understanding in this area, and is a strong example of the innovation and collaboration that will help us reach our greenhouse gas emission reduction goals.”

Rail vs. pipeline: Comparing the costs

Nimana has created a second computer model with his colleagues to compare the costs and the environmental impact of transporting bitumen and synthetic crude oil by rail and pipeline. He considers, for instance, the effects of carrying more fuel for long distances on both the costs and the amount of carbon dioxide released. Just how much fuel does Canada transport? In 2012, we exported roughly 2.2 million barrels of crude oil per day to refineries in the U.S. Midwest and the Gulf Coast. By 2020, the number of barrels per day is expected to increase by 450,000.

One of the biggest challenges in this work is finding and gathering data. To ensure reasonable accuracy, Nimana performs a sensitivity analysis—varying his parameters to see whether the results vary.

Nimana says his work is timely and relevant, and highly rewarding. He knows he’s contributing to the development of new policies. He and his colleagues receive immediate and meaningful feedback from industry partners and have opportunities to build relationships with them. Ultimately, Nimana will be able to project how greenhouse gas-intensive various fuels produced from Alberta oilsands bitumen (synthetic crude, diesel and petrol) are, compared with fuels produced from conventional crude oils such as light oils found in Alaska, California and the Middle East.

Nimana has already been recognized for his work. Last fall, he received two awards from the U of A: the Sadler Graduate Scholarship in Mechanical Engineering and the R.R. Gilpin Memorial Scholarship. A master’s student in engineering management, Nimana is part of a research program led by mechanical engineering professor Amit Kumar, who holds the Industrial Research Chair in Energy and Environmental Systems Engineering funded by the Natural Sciences and Engineering Research Council of Canada, Cenovus Energy, Alberta Innovates – Energy and Environment Solutions, and Alberta Innovates – Bio Solutions.