UAlberta project is one of 11 receiving $1.5M in new federal funding. 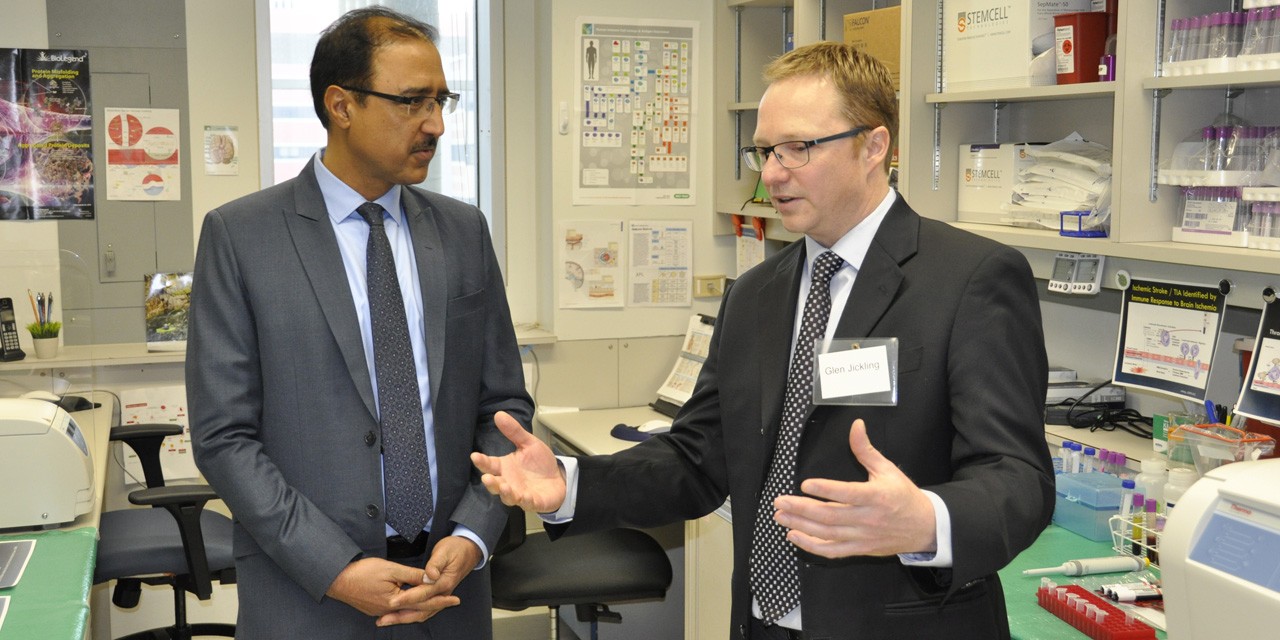 Glen Jickling (right) describes his genomic stroke research to Amarjeet Sohi, minister of infrastructure and communities, during the announcement today of nearly $1.5 million in federal funding for Jickling's work and 10 other promising projects at UAlberta. (Photo: Michael Brown)

Rapidly identifying and treating people suffering from a stroke in the critical moments before irreversible damage is done is the goal of one of 11 University of Alberta projects earmarked for federal funding.

Glen Jickling, a stroke researcher in the Faculty of Medicine & Dentistry, received $160,000 from the Canada Foundation for Innovation’s John R. Evans Leaders Fund for equipment to help his team better understand the genetics and genomics of stroke and develop new treatment targets and precision diagnostic tools.

“When it comes to strokes, time is critical. Every minute wasted results in the death of millions of brain cells,” said Jickling. “A knowledge gap exists in how to both accurately and rapidly triage acute stroke to treatment centres.

“Our patient-focused approach will provide a new understanding of immune activation, clot formation and vascular dysfunction that directly relates to human stroke.”

With more than 50,000 Canadians suffering a stroke every year, the financial burden to the country exceeds $3.6 billion annually in health-care costs, lost earnings and reduced productivity.

When treated early, Jickling said, patients who were unable to speak and walk can eventually return to work with minimal deficits, but he added that delivering acute treatment to all Canadians with stroke remains challenging.

“Preventing stroke is based on knowing the cause of stroke and treating it,” he said. “We want to better prevent and treat stroke by understanding how a person’s genetic makeup programs their response to stroke risk factors, acute stroke injury and therapies used to treat stroke.”

Amarjeet Sohi, federal minister of infrastructure and communities, was on campus to make the announcement of nearly $1.5 million for the 11 projects.

U of A president David Turpin said the John R. Evans Leaders Fund continues to be a critical source of support for researchers.

"The investments announced today are providing our researchers with the cutting-edge tools and environments needed to make bold discoveries that improve the lives of Canadians,” he said.

Jennifer Hocking, $159,912
A zebrafish facility for the study of eye disease

Glen Jickling, $160,000
Genomics and genetics of stroke and neurological disease

Jessica Yue, $201,280
Neural regulation of metabolism: an in vivo laboratory