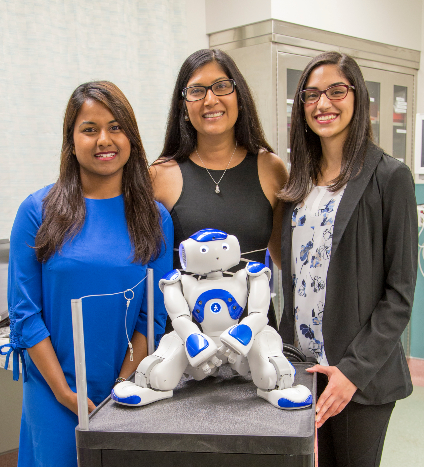 U of A medical researcher and pediatric emergency physician Samina Ali (centre) is building on previous studies that showed interacting with robots had positive effects on both children and their parents. (Photo: Riyaz Sharan)

International study co-led by pediatrics researcher one of three U of A projects to receive funding from new Canada-UK AI initiative. 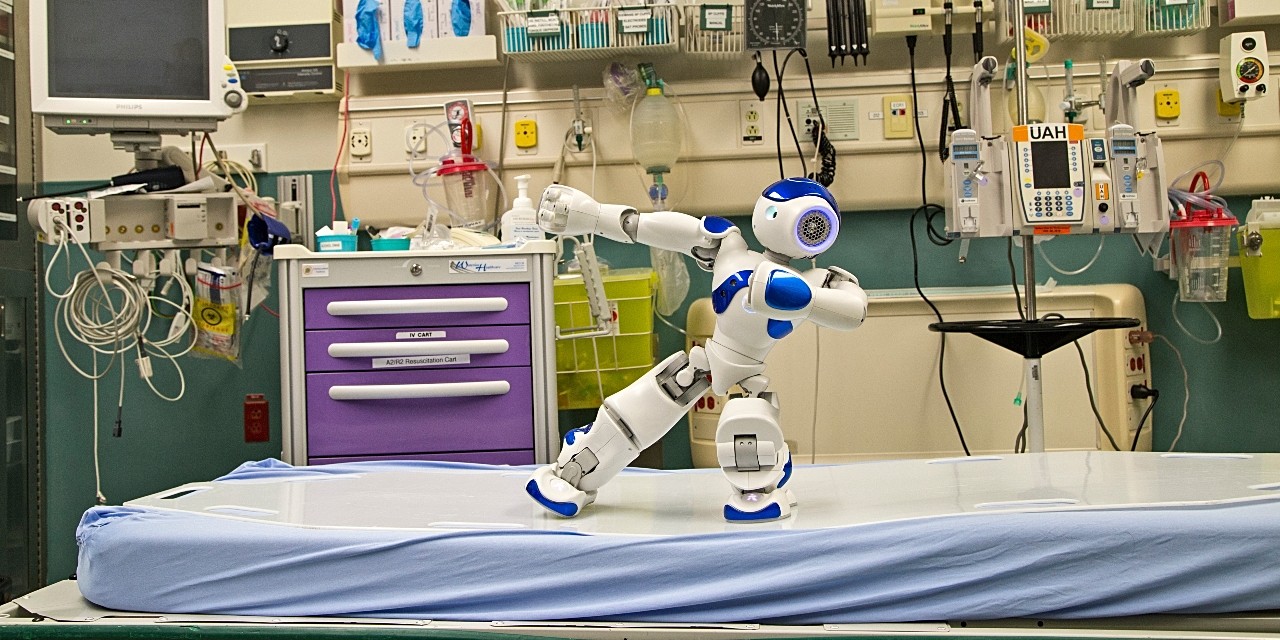 A new research project will involve upgrading robots like MEDi (pictured) with artificial intelligence so they can detect a child’s state of mind during a hospital procedure and adapt their behaviour to provide distractions by singing, dancing or telling stories. (Photo: Supplied)

A new research collaboration between researchers at the University of Alberta and the University of Glasgow is exploring whether interaction with an AI-enhanced, socially intelligent robot can effectively distract children during painful clinical procedures, reducing their pain and distress.

“Pain is much more than just a physical response; we also want to manage a child’s stress, anxiety and distress,” said U of A medical researcher and pediatric emergency physician Samina Ali. “We want to know if integrating a robot into the clinical setting can create a more positive, meaningful and less traumatic experience for children and their families.”

The three-year project builds on a series of smaller studies, supported by funding from the Stollery Children’s Hospital Foundation, that used programmable humanoid robots named MEDi to deliver cognitive behavioural therapy-based interventions to children as they went through procedures involving needles. In those studies, the MEDi robot was remotely operated and followed a limited script. In Ali and the University of Glasgow’s Mary Ellen Foster’s project, the team is proposing using artificial intelligence to develop a responsive and adaptive robot.

“In our earlier studies with the robots, you could just see the whole mood in the room change—not only with the children, but with the parents too,” said Ali, who is also a member of the Women and Children’s Health Research Institute.

“When we measured parental anxiety pre- and post-procedure, the parents whose children had interacted with the robots had significantly less anxiety. So that was a very positive byproduct.”

Some of the proposed programming for the robots includes the ability to detect a child’s state of mind and adapt their behaviour to distract attention away from procedures, such as by talking, singing, dancing or telling stories.

The robots’ performance will be evaluated through a clinical trial in two Canadian hospitals during the final year of the project, Ali said.

“Our approach is to co-design the programming, so we’re going to interview children, parents and health-care providers to find out what they would be looking for in a tool like this,” she said. “Then our team’s engineers will design the software and we’ll bring it back to children in the health-care settings for usability testing.”

The results could lead to applications outside of emergency settings, including any situation where parents or health-care providers are delivering potentially painful treatments to children.

“Ultimately, I want to add as many tools as I can to the caregiver toolbox to minimize children’s pain and distress,” Ali said. “I think that’s the obligation of any health-care provider—to do everything we can to make it a more positive experience for everyone, particularly in a country with such high resources as Canada.”

In February, the initiative announced funding of approximately C$5 million and £5 million over three years for 10 interdisciplinary, international AI research teams. Along with Ali’s project, two other U of A projects received funding.