Researchers find the key to what's in our pee 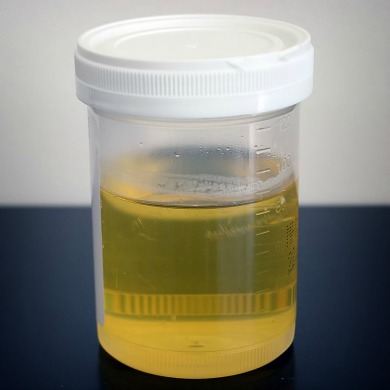 (Edmonton) Researchers at the University of Alberta have determined the chemical composition of human urine—and the results reveal a remarkable complexity in a seemingly simple substance.

The study, which took more than seven years and involved a team of nearly 20 researchers, revealed that more than 3,000 chemicals or “metabolites” can be detected in urine.

“Urine is an incredibly complex biofluid. We had no idea there could be so many different compounds going into our toilets,” said David Wishart, the senior scientist on the project.

The results are expected to have significant implications for medical, nutritional, drug and environmental testing.

“Most medical textbooks only list 50 to 100 chemicals in urine, and most common clinical urine tests only measure six to seven compounds,” said Wishart. “Expanding the list of known chemicals in urine by a factor of 30 and improving the technology so that we can detect hundreds of urine chemicals at a time could be a real game-changer for medical testing.”

Wishart says this study is particularly significant because it will allow a whole new generation of fast, cheap and painless medical tests to be performed using urine instead of blood or tissue biopsies. In particular, he notes that new urine-based diagnostic tests for colon cancer, prostate cancer, celiac disease, ulcerative colitis, pneumonia and organ transplant rejection are already being developed or are about to enter the marketplace, thanks in part to this work.

The chemical composition of urine is of particular interest to physicians, nutritionists and environmental scientists because it reveals key information not only about people’s health, but also about what they have eaten, what they are drinking, what drugs they are taking and what pollutants they may have been exposed to in their environment. Analysis of urine for medical purposes dates back more than 3,000 years. In fact, up until the late 1800s, urine analysis using colour, taste and smell (called uroscopy) was one of the primary methods early physicians used to diagnose disease. Even today, millions of chemically based urine tests are performed every day to identify newborn metabolic disorders, diagnose diabetes, monitor kidney function, confirm bladder infections and detect illicit drug use.

The Human Urine Metabolome paper appeared Sept. 4 in the peer-reviewed journal PLOS ONE. The word metabolome (which is derived from the words “metabolism” and “genome”) is defined as the complete collection of metabolites or chemicals found in a particular organism or tissue. The human urine study is part of a series of studies by researchers at the U of A aimed at characterizing the entire human metabolome. In 2008 the same U of A team described the chemical composition of human cerebrospinal fluid, and in 2011 they determined the chemical composition of human blood.

“This is certainly not the final word on the chemical composition of urine,” Wishart said. “As new techniques are developed and as more sensitive instruments are produced, I am sure that hundreds more urinary compounds will be identified. In fact, new compounds are being added to the UMDB almost every day.

“While the human genome project certainly continues to capture most of the world’s attention, I believe that these studies on the human metabolome are already having a far more significant and immediate impact on human health.”

Researchers find the key to what's in our pee
Newsroom