Now that we have seen the streamers forming, we can start doing experiments to figure out how to prevent them from forming. 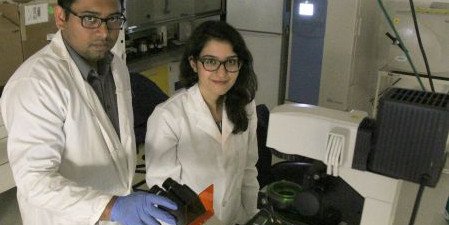 Aloke Kumar with PhD student Mahtab Hassanpourfard in Kumar's lab in the National Institute for Nanotechnology.

(Edmonton) A University of Alberta research team has made an important discovery about how medical devices like heart stents and catheters can become clogged by bacteria.

In a series of experiments conducted by PhD student Mahtab Hassanpourfard and undergraduate engineering student Zahra Nikakhtari, the researchers observed for the first time how accumulations of bacteria called flocs stick to a surface then turn into long strands, or “streamers,” that quickly clog a micro-scale medical device.

The team injected fluid contaminated with flocs of Pseudomonas fluorscens bacteria into a microfluidic device with a series of micropillars inside its main channel. The flocs attached to the micropillars and then, due to the force of the fluid flowing around them, were stretched into streamers measuring up to seven times the floc’s original length.

Little research has been conducted on the streamers, but much of it has been conducted by members of the U of A team. In previous experiments, it was nearly impossible to distinguish the inception of streamer formation from surrounding fluids because they are virtually translucent. In this case, researchers solved the problem by “tagging” the bacteria with nano-scale fluorescent markers to improve visibility.

It is the first time researchers have observed the formation of streamers from bacterial flocs.

“To watch nature working at this level—it’s beautiful,” said Kumar. “But this is a hazard. Our device mimics biomedical membranes, and if they become clogged it can be catastrophic for the patient.”

The team discovered that clogging takes place rapidly when fluid flows through the device. Without some pressure causing fluid to flow, clogging would take weeks. But with flow, the streamers form. “The streamers look like spiderwebs. They collect a lot of material and it leads to rapid clogging.”

The team’s findings are reported in the journal Nature – Scientific Reports. (Read the paper online.)

Hassanpourfard, whose work is supported through funding from Alberta Innovates – Technology Futures, says the findings are taking the research in exciting directions.

“Now that we have seen the streamers forming, we can start doing experiments to figure out how to prevent them from forming,” she said, adding that the research facilities that supported the research—Kumar’s lab in the National Institute for Nanotechnology and the Faculty of Engineering’s NanoFab facility––made the work possible without leaving campus.