Researchers put pedal to the metal to improve diesel engines 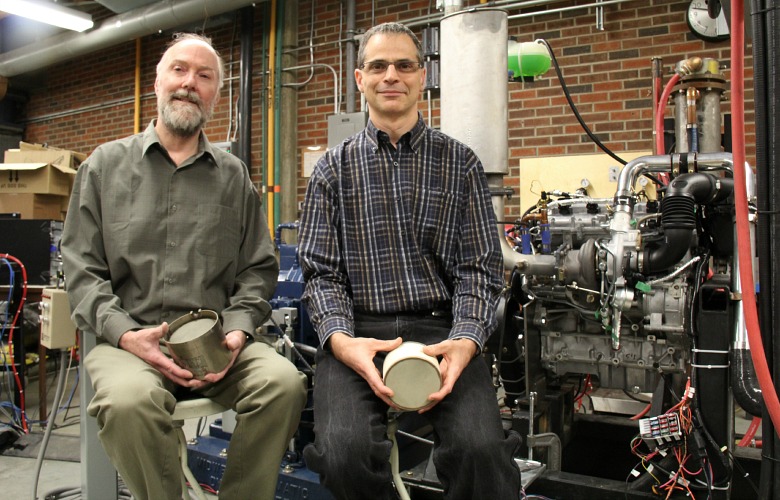 (Edmonton) A recent project by University of Alberta researcher Robert Hayes yielded more than just a way to reduce the use of precious metals in controlling emissions from gasoline-powered vehicles. His work also boosted the engine’s fuel efficiency.

Now, Hayes and fellow U of A researcher Bob Koch have been awarded a grant from the Natural Sciences and Engineering Research Council of Canada, under the Automotive Partnerships Canada initiative, to try duplicating the results for catalytic systems in diesel engines.

Their award was one of 10 announced this morning by the Honourable Greg Rickford, minister of state for science and technology. The $1.2-million award, which is shared between the federal government and industry, will fund the three-year project.

“The potential for reducing precious metals is even better in diesel engines because you need much more active catalysts,” said Hayes. “And if you can reduce the precious metals by 10 per cent, the cost saving is much greater.”

Though the work to reduce the use of metals such as platinum, rhodium and palladium is important, Hayes says, the automotive industry is also looking to meet standards imposed by impending changes to the U.S. Corporate Average Fuel Economy regulations that are set to change in 2016. He says there are some significant differences between emission controls for gasoline and diesel engines. Yet, part of the goal will still be to improve fuel economy, thus reducing emissions.

“In a diesel or any lean-burn engine system, there’s a lot of oxygen in the exhaust, so you need separate catalysts to do all the different reactions. It’s a very complicated interplay,” said Hayes. “We’re going to study that system to see the best way to put in the new modifications.”

Hayes hopes to have some initial test results to demonstrate to their industry partners, Vida Holdings, within the first year. Theoretically, He says, their work—pending some rigorous industry testing and government approval—may make its way into production within three years.

Hayes notes that their entire process will be based on fine-tuning their results for an optimal design, but getting a preliminary finding that improves on current designs helps the industry in its race to meet the 2016 timeline.

“There’s a big push right now because they want to meet those 2016 goals, which means they need the technology now,” he said. “We designed the timelines in that manner. We have some [industrial lab] testing right in the first year, so we’ll do some preliminary work and we’ll say, ‘This is what we think is the best starting point; let’s test it.’”

“If the system works, there will be potential for large manufacturers to increase their fuel efficiency and reduce their emissions,” said Koch. “This is a diesel project but there are a lot of diesel engines in North America. People who run fleets of trucks will really care about the impact this could have.”