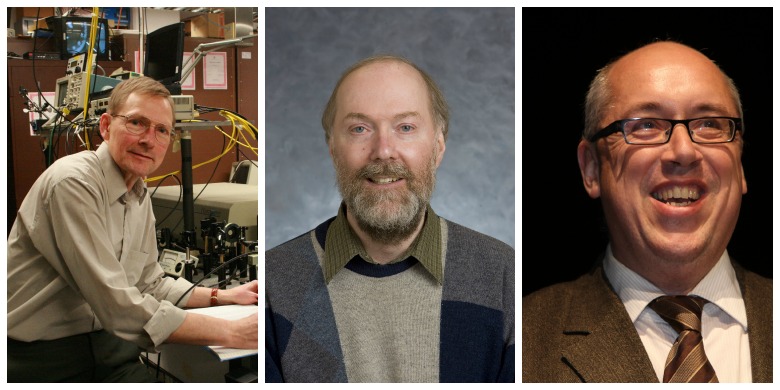 Engineering researchers Robert Fedosejevs and Robert Hayes, and renewable resource researcher Andreas Hamann, each received Natural Sciences and Engineering Research Council of Canada Strategic Project Grants because their projects pertain to targeted fields of study that could strongly influence Canada’s economy, society or environment in the next decade.

The destructive blight of the mountain pine beetle paved the way for Hamann’s recently announced $313,500 grant to determine which lodgepole pine genotypes are particularly well adapted to handle extremes of Canada’s changing climate.

The beetle infestation that has devastated the forest industry also wiped out one of the world’s biggest forestry experiments—Keith Illingworth’s lodgepole pine provenance trials. In 1974, the U.K. forest geneticist gathered seeds from 140 sites stretching virtually the entire length of western North America, including 60 different locations throughout British Columbia. His goal was to compare different genotypes of the same species growing side by side in a range of environments.

The death of the trees opened the door for Hamann, whose research involves taking stem sections—which would prove fatal to a living tree. “We want to destructively sample those trials,” said Hamann, a researcher in the Faculty of Agricultural, Life and Environmental Sciences. “Now that they are dead, we can do this.”

The NSERC funding required for Hamann’s project is in addition to in-kind support and collaboration with a laboratory in Freiburg, Germany. The German lab is equipped with a machine normally used for slicing large silicon wafers for satellite solar panels, allowing them to produce and analyze smooth, precise tree-ring samples. “With an electromagnetic resistance sensor, you can get a record of how fast that tree was putting on wood,” Hamann explains.

“We will be able to identify particular provenances, particular source locations, that grow well compared with others—that handle drought events well, without mortality or severe reduction in growth, or without lasting damage.”

Hayes, a researcher in the Department of Chemical and Materials Engineering, received $413,080 for his research project on engineering bimetallic catalysts for energy and environmental applications.

Collaborating with support from department colleague Natalia Semagina, and from industry and researchers at the University of Saskatchewan, Hayes will use the grant to help develop a new class of bimetallic catalysts.

Hayes said that he and his research team will examine and manipulate nanoparticle placement in bimetallic catalysts in an effort to develop, “designer catalysts, so to speak, that work at lower temperatures, and have a high conversion efficiency and a longer lifespan than currently used catalysts.”

Catalytic combustion is used in vehicles, for example, to reduce harmful emissions. Extending the life of the bimetallic catalyst increases the time before the vehicles start to produce environmentally harmful byproducts. These catalysts also have numerous applications in the energy and environment sector, such as in oil upgrading, flue gas treatment, water remediation and fuel cells.

Fedosejevs, a researcher in the Department of Electrical and Computer Engineering, will receive $447,150 over three years for his project, entitled “Fusion Energy—Advanced Ignition Techniques and Target Fabrication.”

Fusion energy is created by fusing together two isotopes of hydrogen into an element with a higher atomic number. The lighter nuclei of the two atoms bind and give off energy. However, because both nuclei are positively charged, they repel each other, making it difficult to get close enough to fuse them.

To solve this problem, researchers have turned to high-powered lasers. They irradiate a fuel pellet with a laser pulse until it becomes 100 times more dense and reaches a temperature around 100 degrees centigrade. But they’re still not sure how much laser energy is needed.

Pursuing a clean, efficient, plentiful source of energy has been a goal of science for decades, and fusion might be the best option to achieve this. It bests nuclear fission power by being significantly safer and produces no radioactive waste as a byproduct, just helium gas. As well, hydrogen isotopes are readily available all over the world thanks to seawater. And the fuel needed to run a large plant is minuscule—about a truckload of fuel has the same energy output as thousands of train cars of coal.

Best of all, it doesn’t produce greenhouse gases.

“Fusion energy has been 20 years in the future since 1960,” he said. “But I think we're really much closer to that being true today. If we can discover the ignition threshold in the next year or two, we're about 10 years away from an engineering-prototype reactor. Once we have that, we're about another 10 years away from a first-generation commercial reactor.

“The key question right now is, ‘Can we make it work?’ And we think we're getting very close with lasers.”