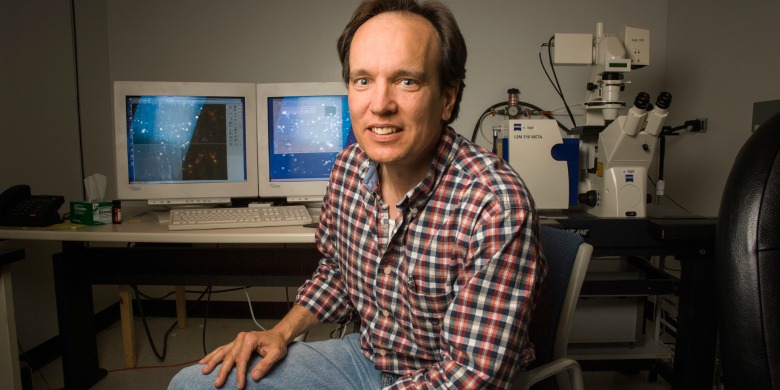 130308-richardwozniak-banner
Richard Wozniak led a team of UAlberta medical researchers who worked with U.S. colleagues to discover a previously unknown but critical role for the "gateway" that controls how molecules move in and out of a cell's nucleus. (Photo: Richard Siemens)

(Edmonton) University of Alberta medical researchers and their American colleagues have discovered that the “gateway” known to control the movement of molecules in and out of a cell’s nucleus appears to play another critically important role—a role no one had noticed until now.

These “gateways” have a second key job in a cell—the ability to control the structure of chromosomes and the DNA linked to those chromosomes. This affects what genes produce or express. The discovery gives scientists a new way to investigate the triggers for various kinds of disease, says Richard Wozniak, the principal investigator with the U of A’s Faculty of Medicine & Dentistry, who worked on the discovery with collaborators from the Institute for Systems Biology in Seattle, Wash.

“This discovery may explain links between disease and defects in these gateways,” he says.

“Our studies provide new insights into how the nucleus is organized and how the genetic material it houses is used, including important information about the jobs genes do. When cells have to adapt to their environment, they need to change their gene expressions pattern. If this isn’t done right, diseases such as cancer or heart disease occur. Our work also provides insight into why many viral infections target this gateway for their survival.”

The research team’s discovery was recently published in the peer-reviewed journal, Cell.

Wozniak and his team are continuing their research in this area. They want to learn more about this new mechanism when it functions properly, and what causes it to malfunction. Uncovering the key players in this new mechanism is also key, he says.

“We want to understand how these gateways are functioning at a molecular level—what makes them capable of altering the structure of chromosomes and making other key changes? That is our next step,” says Wozniak, who is a researcher with the Department of Cell Biology.