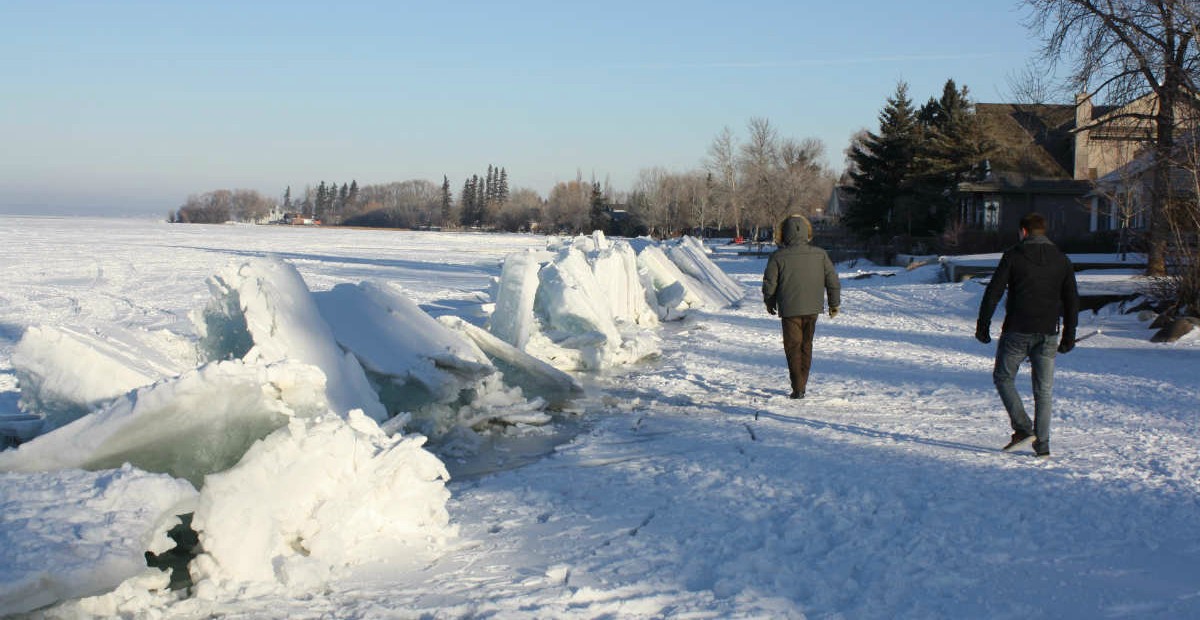 Ice ridges on Lac Ste. Anne on Jan. 5, four days after a rare seismic event shook the lake. Researchers have solved the mystery of the cause: an icequake. (Photo: Ryan Schultz/Alberta Energy Regulator)

Icequakes created by a unique combination of weather and buckling lake ice—not earthquakes—caused the tremors that damaged homes and properties in several central Alberta communities last New Year’s Day, according to new research.

“Central Alberta is a pretty seismically quiet place, so the fact that these tremors were felt in several communities across the region—and with this much power—is quite noteworthy,” said University of Alberta geoscientist Jeffrey Kavanaugh, who worked with seismologists Mirko van der Baan and Ryan Schultz, and other researchers to solve the mystery of what caused the tremors.

"Unlike most seismic activity, which is caused by tectonic stresses, these were caused by thermal stresses related to Alberta’s cold climate.”

The quakes occurred on Lac Ste. Anne, Pigeon Lake and Gull Lake, and had a magnitude of 2.0 on the Richter scale, recorded on the Albertan regional seismic network.

Icequakes are pops and groans a lake makes as it adjusts itself during the course of the day.

“These are tiny little icequakes,” said Schultz. “Usually this process happens slowly and as a series of smaller events, since snow cover can insulate some of the temperature changes.”

But as New Year’s Day dawned, a series of unlikely weather conditions came together to cause a much larger icequake, Schultz explained. A lack of insulating snow cover and a dramatic rise in temperature over 24 hours—from -35C to -5C—caused the lake ice temperature to rise rapidly.

“This caused a rapid thermal expansion of the ice, up to four metres towards the shoreline,” said Schultz. “With nowhere for the expanding ice front to go, it eventually buckled and broke suddenly—resulting in the icequake shaking and the spectacular ice ridges forming near the lakefront.”

Icequakes of this magnitude are very rare.

“Lake ice ruptured nearly instantaneously over hundreds of metres, which is very unusual,” said van der Baan. “The last time this happened on Alberta lakes was probably several decades ago.”

Schultz added it’s possible that all of the conditions that occurred on that day only come together at the same time and the same place every few decades.

The study, “A New Year’s Day Icebreaker: Icequakes on Lakes in Alberta, Canada,” was published in the Canadian Journal of Earth Sciences.