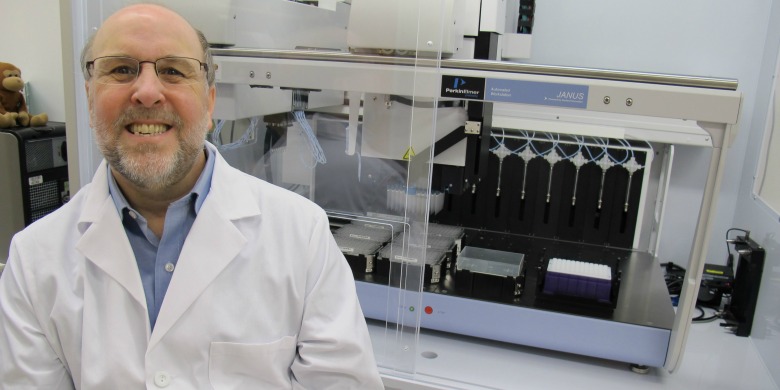 (Edmonton) Medical researchers at the University of Alberta have discovered that knocking out a particular “partner” gene is the Achilles heel of some cancers.

Cancer-causing genes often have a partner in crime, meaning when either of the two genes is active in cancer cells, the tumour grows. The challenge for researchers has been pinpointing the genes’ “lethal partners.” Loss of one of the partners alone isn’t deadly to the cell, but if both are removed, the cancer cells are destroyed.

Faculty of Medicine & Dentistry researcher Michael Weinfeld and his collaborators, Edan Foley and graduate student Todd Mereniuk, took cells and artificially removed a particular gene known as PNKP. Then the team knocked out 7,000 other genes, one at a time, all in an effort to find PNKP’s “lethal partners” that trigger cell death.

The team confirmed their findings by examining tumours that lacked this specific cancer suppressor. They then deactivated PNKP, which caused the cancer cells to die. Their findings were published in the peer-reviewed journal Cancer Research.

Developing cancer drugs that deactivate PNKP will result in only the cancer cells that lack this gene being eradicated, not healthy, normal cells, says Weinfield, who works in the Department of Oncology at the U of A.

“Lots of work in the cancer research field is to try and come up with ways to attack cancer cells and leave normal cells intact,” he says. “You need to take advantage of whatever you can to defeat cancer, which can be extremely difficult.”

Weinfeld and his colleagues are now working with Dennis Hall in the Department of Chemistry at the U of A and the Centre for Drug Research and Development in British Columbia to improve this potential drug they've discovered. They are also working in partnership with John Lewis, the Frank and Carla Sojonky Chair in Prostate Cancer Research in the Faculty of Medicine & Dentistry and a fellow of the National Institute for Nanotechnology, to work with his cancer-targeting nanotechnology theories.

The team’s research was funded by a grant from the Canadian Institutes of Health Research.