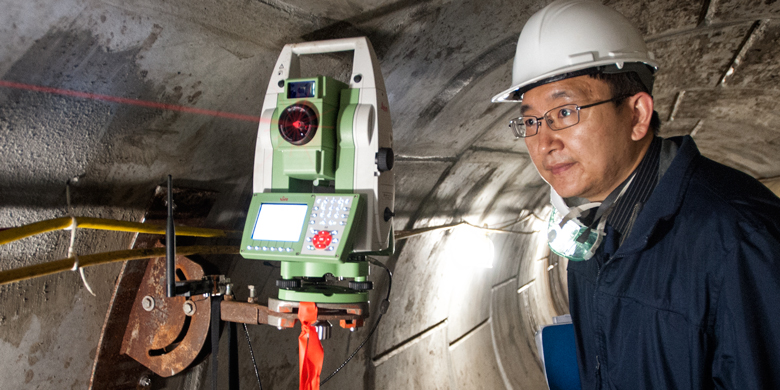 (Edmonton) A team of University of Alberta civil engineers has taken its research out of the lab and installed it in a City of Edmonton sewer and drainage tunnel project, 30 metres beneath the city’s west end.

The U of A team tested its new laser guidance technology on machinery boring a kilometre-long tunnel from its starting point at 151 St. and 99 Ave. to 93 Ave.

The U of A researchers, led by civil and environmental engineering professor Ming Lu, developed a multi-point laser beam system that improves the steering and the efficiency of tunnel-boring equipment.

“When you’re boring a tunnel, you’re flying blind,” said Lu. “It’s quite a challenge to keep large pieces of equipment on course.”

On the majority of tunnelling projects, current tunnel boring guidance systems use just one point of laser light to stay on track.

At 2.5 metres in diameter, the city’s sewer and drainage tunnel demands a high quality-control standard. Its alignment must not stray off course by more than two inches—and the field of vision from the machine is limited to a corner of its back end.

The U of A’s new technology is called the Virtual Laser Target Board. It uses a survey robot that automatically takes multiple laser measurements in the tunnel to position itself and the machine with high precision, enabling operators to have better control over the equipment on the fly, says Lu.

Lu began the computing research for the technology six years ago. Its first field test was a small-diameter tunnel project for utility cables in Hong Kong. With funding support from the City of Edmonton and the Canadian technology funding group Tecterra, Lu’s team upgraded the computing algorithms and was ready to field test the equipment on Edmonton’s 2.5-metre-diameter sewage and drainage project.

Lu says the city relied on the current one laser point guidance system on this project and compared its performance with that of the U of A equipment. He says the city was impressed.

“With the new technology, the tunnel boring machine operator will no longer work in darkness, and the quality of the tunnel alignment can be controlled within a few millimetres.

“With the current, single laser beam technology, the tunnelling operations have to be shut down every 10 metres for one hour so the operators can check the laser direction,” said Lu. And the digging is halted for another seven hours every 200 metres while the single-laser equipment is repositioned in the tunnel.

“Our equipment only requires a half-hour work stoppage and laser repositioning at 200-metre intervals,” said Lu.

Time is money in the construction business, and Lu says the potential productivity gain resulting from the U of A technology could save 10 per cent on project time and direct costs on a straight tunnel like the west-end sewer and drainage tunnel.

Lu says this is a win-win for the U of A civil engineering team and the City of Edmonton. The field test will help with the eventual commercialization of the technology, but that’s not the most important accomplishment.

“With this project our U of A graduate researchers got their research out of the lab and into the real world,” said Lu. “It also shows U of A researchers have made a real contribution to improving construction productivity and, in the end, improving people’s lives.”