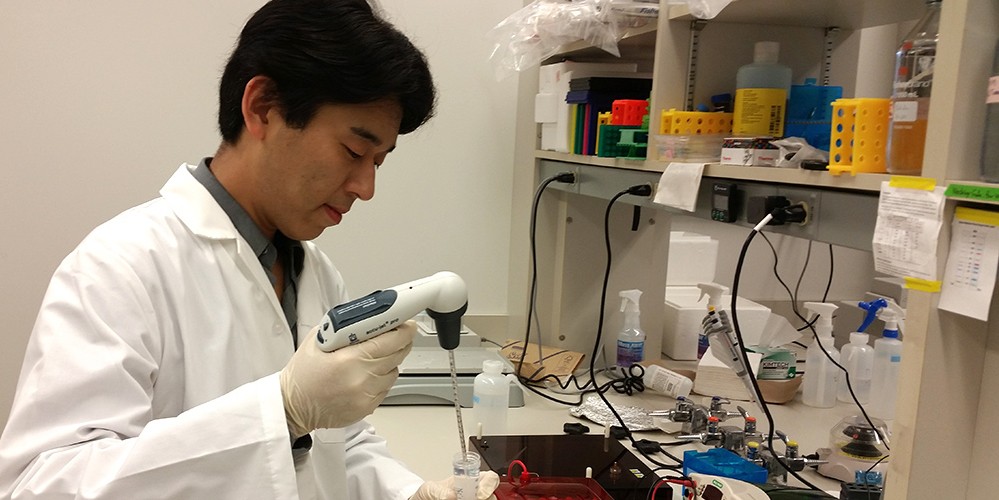 Toshifumi Yokota led a research team that developed a technique for the removal and repair of the gene mutation from human cells of people suffering from a severe type of muscular dystrophy. (File photo)

University of Alberta researchers have made two new discoveries in Duchenne, the most common form of muscular dystrophy, a genetic disorder found primarily in males that is characterized by progressive muscle degeneration and weakness.

“We’ve found one possible way to repair gene malfunction in Duchenne that’s significantly more effective than the most recently approved FDA drug,” said U of A medical genetics professor Toshifumi Yokota. “We’ve also found a new way that may prevent heart failure in Duchenne patients, a leading cause of death in MD patients.”

Duchenne is the most common of nine major types of muscular dystrophy (MD), and one of the most severe forms among children. It is caused by an absence of dystrophin, a protein that helps keep muscle cells intact.

Yokota said his team has been working with small DNA-like molecules called antisense oligonucleotides (AOs) that work like a stitch to remove the section of DNA products (or RNA) that’s disrupting the code for protein production.

In one study published in Molecular Therapy, the software the team developed sped up the process of identifying the best candidate for removal of the gene mutation that causes the disease.

“The dystrophin gene is our largest gene with 79 genetic elements (exons) coding for around 60 amino acids each,” said Yokota. “The computer was able to predict the best location to target by AOs in a much quicker and cost-efficient way.”

The team then tested the AOs developed to remove the gene mutation in animal models and in human cells in the laboratory. They found the approach was up to 12 times more effective at removing and repairing the affected genes than the most recently approved drug treatment on the market.

In their second study, published in Proceedings of the National Academy of Sciences, the team used another DNA-like molecule, phosphorodiamidate morpholino oligomers tagged with heart-targeting molecules, to skip the genetic elements (exons) known to disrupt protein production in the heart muscle.

“Cardiomyopathy is a leading cause of death in MD. Our approach rescued the heart muscle in animal models,” explained Yokota. “Our next goals are to translate these findings into therapeutics, leading to clinical trials with MD patients.”