Construction of biofuel production plant set to start this fall. 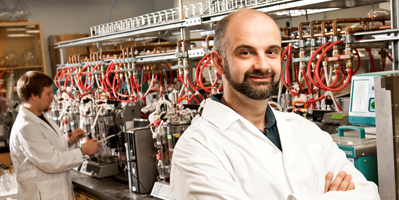 A $25-million production plant is scheduled to begin construction in Ontario this fall, paving the way for commercializing renewable diesel made from waste fat, in a process that was developed at the University of Alberta.

The innovative method to convert animal fats, cooking grease and other low-value fats and oils into hydrocarbon fuels was invented 12 years ago by bioresource scientist David Bressler, director of the Biorefining Conversions Network in the Faculty of Agricultural, Life and Environmental Sciences.

Last year, Forge Hydrocarbons, a spinoff company in which Bressler is a partner and the lead scientific adviser, received a $4.2-million grant from Sustainable Development Technology Canada to help build the plant.

At the time, Bressler said it was “a huge validation,” because the funder only supports groundbreaking, economically viable products.

This week, Forge CEO Tim Haig announced that the company intends to start construction at a site south of Sarnia, Ont., this fall, on its first commercial-scale manufacturing facility, with a goal of beginning production at the site in the last half of 2018.

Once built, the plant will produce renewable liquid hydrocarbons at a capacity of 19 million litres annually. That represents a significant increase over the 200,000 litres per year that have been produced at Forge’s Edmonton pilot plant, where Bressler’s team has been developing the method and its scale-up for three years, with investment from Western Economic Development Canada and the Alberta Livestock and Meat Agency.

“The transition from benchtop to commercial reality was only possible due to a close partnership and the leadership of the on-site Forge team through the pilot trials with the support of the City of Edmonton and the Alberta Innovates system,” said Bressler.

Though he is not the first scientist to convert renewable feedstocks into fuel, Bressler is the first to figure out how to do it cost-effectively. The trick lies in how oxygen is released from lipid molecules to create hydrocarbons, which produce energy when combusted.

To date, petroleum companies have used hydrogen and a mineral catalyst to remove the oxygen, producing what is known as “green diesel.” Hydrogen and minerals are expensive, however, and require a clean feedstock such as canola that is also of high value.

Bressler’s method, done with high-temperature chemistry, needs neither a catalyst nor clean feedstock.

First, animal fat or crop-seed oil is heated with water at a high temperature to create fatty acids and glycerol. The glycerol is removed and the fatty acids are heated again, at more than 400 C, until the oxygen within them is released. That makes the fatty acids into hydrocarbons that can be further processed to become various fuels, including gasoline.

“We can use really dirty fuels like brown grease (used cooking oil) and tall oils, which are the oils from trees when they separate out the pulp,” said Bressler.

The resulting fuel is also a “drop-in biofuel,” which means that it’s chemically indistinguishable from petroleum-based fuel. It does not need to be blended with petroleum-based diesel, the way that ethanol does. Ethanol, which is made from fermenting corn and sugar cane and is oxygenated, was the first iteration of a biofuel and is still the one most widely used.

Earlier basic research elements of the project were funded by Alberta Innovates, BioFuelNet Canada and the Natural Sciences and Engineering Research Council of Canada.