Respecting the rise of China 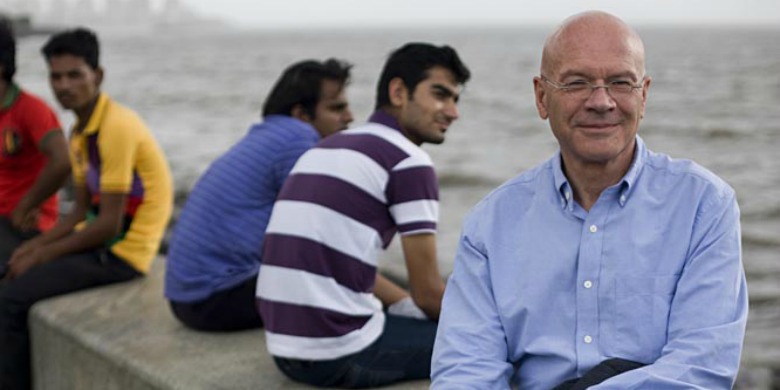 (Edmonton) Martin Jacques says the global power shift from west to east is inevitable, but it need not be a threat if westerners can learn to understand and appreciate the culture that is driving it.

Jacques, a senior visiting fellow at the London School of Economics and a visiting professor at Tsinghua University in Beijing, spoke about the rapid rise of China during his keynote address Jan. 28 to formally kick off the events of the University of Alberta’s International Week 2013.

Gordon Houlden, director of the U of A’s China Institute, introduced the British author and public speaker to the audience in the Myer Horowitz Theatre and telecast viewers in Calgary and Trinidad. He called Jacques bold and ambitious for his approach to tackling some of the toughest questions concerning China in recent years, such as how modern China achieved its remarkable pattern of growth and modernization, and noted that Jacques “is not afraid to challenge us to think hard about how far China’s momentum will carry the nation, and what will be the implications for the rest of this planet.”

Among those implications, says Jacques, are changes to fundamental western ideas and ideals on morality, ethics and culture. That’s why he says events such as International Week are crucial.

“We’re moving with great speed into a world that is entirely different from anything we’ve known for the last 200 years. We’ve never faced a challenge like this. When the United States rose to replace Britain as the dominant power of the world, the U.S. came from Europe in the first instance. So it wasn’t unfamiliar; the lines of continuity were very strong. China represents something completely different,” he said.

“The difficulty is there’s not much understanding of China. So events like these are extremely important—they require people to talk, think and reflect on China. The rise of China is going to dominate the western mind the whole of this century, without any doubt. So this event could not be more appropriate, timely or important.”

Jacques says that as China continues to grow in economic might, it will gain political strength—which, like others before it, such as the U.K., it will use accordingly.

He notes that a clear understanding of China’s culture and politics, such as the relationship between the state and its people, its history and its language, requires a shift in western thinking.

“The biggest problem in the West is that when people think of China now, they say things like ‘no democracy’ or ‘human rights problems.’ That’s very simplistic, because you’re imposing your priorities on them and you think that gives you an understanding of China. It doesn’t,” he said.

Britta Baron, U of A vice-provost and associate vice-president (international), says raising awareness of both our own culture and other cultures is at the heart of this year’s I-Week activities.

“As the world intertwines through the migration of people and the mixing of cultures, it is becoming increasingly important to understand that each of us approaches the world through a cultural lens, which influences our behaviour and the way we relate to others,” she said.

When it comes to China’s impending influence, Jacques says that kind of understanding could make all the difference. “The most important task we’ve got is to understand, respect and treat China as an equal. Respect Chinese culture and history, learn to appreciate it and learn to learn from it. If we can do that, we will be fine. And it will be primarily an opportunity, not a threat. But it really depends on how the West handles it.”

Respecting the rise of China
Newsroom