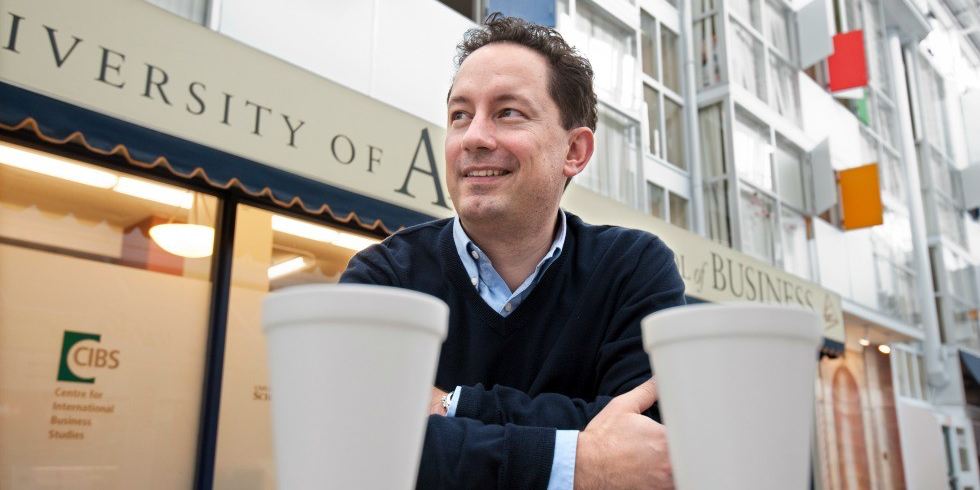 Kyle Murray says falling gas prices make it tempting to spend more on holiday gifts, but Albertans may be better off saving right now instead of splurging. (Photo: Richard Siemens)

(Edmonton) Predicting spending trends over the holidays is always more guesswork than science, but this year there are at least two phenomena that don’t require a crystal ball to forecast, according to University of Alberta retail expert Kyle Murray.

First, merchandise from the blockbuster movie Frozen is too hot to stay on shelves for long and is likely to be ubiquitous under trees again this Christmas, says Murray, much like last year when the Disney studio was caught off guard by the film’s popularity. In fact, most Frozen product is now sold out around the world, helping to make the film the most profitable animated feature in history.

More significant, however, especially in this neck of the woods, is the falling price of oil, and hence falling prices at the gas pump, which have a far more profound effect on consumer spending than we may suspect, says Murray, who is co-author of a recent study in the Journal of Behavioral Decision Making that identifies the price of gas as a primary psychological driver for consumers.

He found, for example, that as many as 75 per cent of Americans said higher gas prices caused them to reduce their overall discretionary spending. “Many of the major financial decisions that consumers make,” he says, “from the location of their homes to the type of car they buy to the vacations they plan to take—appear to be influenced by the price of gasoline.

“Especially those big spikes up and down, which get a lot of media attention” do influence behaviour, he says. “What we’ve seen is that spending, levels of confidence, feelings of wealth, all change in relation to the price of gas.”

The gas price fluctuation is a catch-22, however, at least for Albertans. Falling prices might make it feel as though there’s more money to spend on other things, but it could ultimately spell trouble for our economy. It may make more sense right now to save rather than splurge on that extra stocking stuffer.

Convenience: on-ramp to the e-tail superhighway

Murray also echoes a prediction made by Forbes Magazine that online shopping will surge by 15 per cent this year, which perhaps comes as no surprise. What is new, however, is that the attraction to buying gifts on the Internet is no longer driven by lower prices as much as convenience.

“Online shopping has never really been driven by price and today it is much more about convenience, large product selection and escaping the crowds,” says Murray.

In a recent survey by Deloitte, also quoted by Forbes, as many as two-thirds of respondents said they planned to shop locally this year as opposed to patronizing the big chains. Consumers claimed to be more attracted to the kind of "idiosyncratic product" you can only find at independent retailers and also cited the importance of shopping with a conscience.

But there is a difference between good intentions and actual practice. “First, I don't think local shopping could handle that volume,” says Murray. “Second, that kind of market-share loss would bankrupt the big retailers. My guess is that two-thirds of shoppers will do some of their shopping locally rather than at the big chains, but the vast majority will also shop at the chains.

“I do think shopping with a conscience is becoming more mainstream, but ultimately that would mean reducing consumption—because truly conscientious shoppers would consume much less—and there is little evidence that is happening on a large scale.”

One other trend worth noting, says Murray, is a finding by the Bank of Montreal that suggests the average Canadian is spending a little less this Christmas, while affluent Canadians are spending considerably more.

“It depends on who you are and what your income level is. And according to this one study, furthermore, the average Canadian is going to spend a little less, the average American a little more.

“The big [driver] is the economy and employment. If people feel confident in the direction of the economy, they’ll spend more.”