Revolutionary U of A biopsy-reading invention reaches the masses

Licensing agreement will ensure MMDx becomes the standard of care for transplant patients. 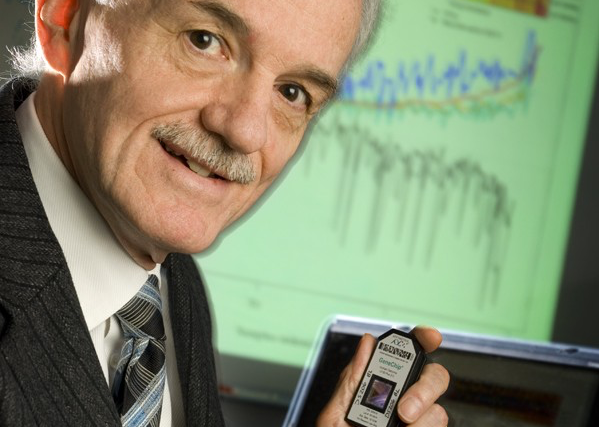 Philip Halloran holds a microarray, a tool used in the MMDx service, which he invented as a way to more accurately diagnose the reason why a transplanted organ is rejected. (Archived photo)

A groundbreaking University of Alberta invention that will impact transplant patients’ outcomes—and possibly cancer outcomes in the future—is poised to become widely available now that the transplant test has been licensed by life science leader Thermo Fisher.

The diagnostic tool is a major advancement on existing biopsy approaches for transplant organs because it relies on precise gene expression measurement. Called MMDx (Molecular Microscope Diagnostic System), it was created by UAlberta’s Philip Halloran and his team.

“We believe this will eventually become the standard of care of people with kidney, heart, lung and liver transplants,” said Halloran, whose spin-off company Transcriptome Sciences Inc. announced an exclusive licensing agreement with One Lambda, a Thermo Fisher brand, this past week.

MMDx was more than 30 years in the making, cost $35 million to develop and is ultimately a disruptive technology, explained Halloran.

“This is a story of a team of researchers who believed in the value of something, even though it was paradigm-changing, and who worked diligently to establish scientific foundation in order to convince medical leaders in the field of its effectiveness and to get it into the hands of the public.”

There are more than a million organ transplant patients in the world and roughly 150,000 of them are struggling with organ rejection.

“It’s vital that clinicians are able to identify the stage of rejection and what drugs to use, and it begins with a biopsy of the organ,” said Halloran.

Conventional histology is often 40 per cent incorrect in assessing causes of rejection, whereas MMDx enables much more accurate diagnoses of transplanted organs that are failing by telling doctors what’s damaging the organ—whether it’s an infection, a recurrent underlying disease, or toxicity to a certain drug—and determining which drugs work.

“We did not just create a test, we’re changing the concept of disease and seeing it for the first time,” explained Halloran. For example, years ago MMDx enabled Halloran to see that a mechanism was damaging little blood vessels in transplanted organs. After 10 years of convincing establishment, Halloran is recognized as defining antibody-mediated rejection (ABMR) as the major mechanism causing graft loss post-transplant.

Currently, a U of A lab has been processing limited numbers of biopsies sent from centres from around the world.

UAlberta experts have been assisting with the new service at Kashi Clinical Laboratories, in Portland, Ore., which will be able to handle samples worldwide by September, said Halloran.

MMDx is already being considered by other researchers in different fields of medicine. For example, a team of U of A melanoma researchers, led by Michael Smylie at the Cross Cancer Institute, are working with the Halloran team to determine whether the MMDx tool can be used to predict which patients with advanced life-threatening cancer would respond to a life-saving new drug. As well, a U of A ulcerative colitis researcher team, led by Brendan Halloran, are using MMDx to try to understand how molecular change in that disease responds to different therapies.

“MMDx is the heart of precision medicine,” said Phillip Halloran, who explained that over time, a repository of individual gene expression statements will be built up in the MMDx computerized database. When a sample is taken and the computer runs comparisons, it can find other patients with nearly identical features whose outcomes have been recorded.

“It’s not establishing categories of broad data sets, but measuring the features and predicting the risks of a particular patient,” he added.

“This will lead to precise prediction about treatments versus strategies for the average patient that don’t take into account individual variables. MMDx tries to understand you and cases exactly like you.”

Revolutionary U of A biopsy-reading invention reaches the masses
Newsroom