Dance, med school and community work in Africa taught latest U of A Rhodes Scholar value of understanding “how people experience life, illness and the world.” 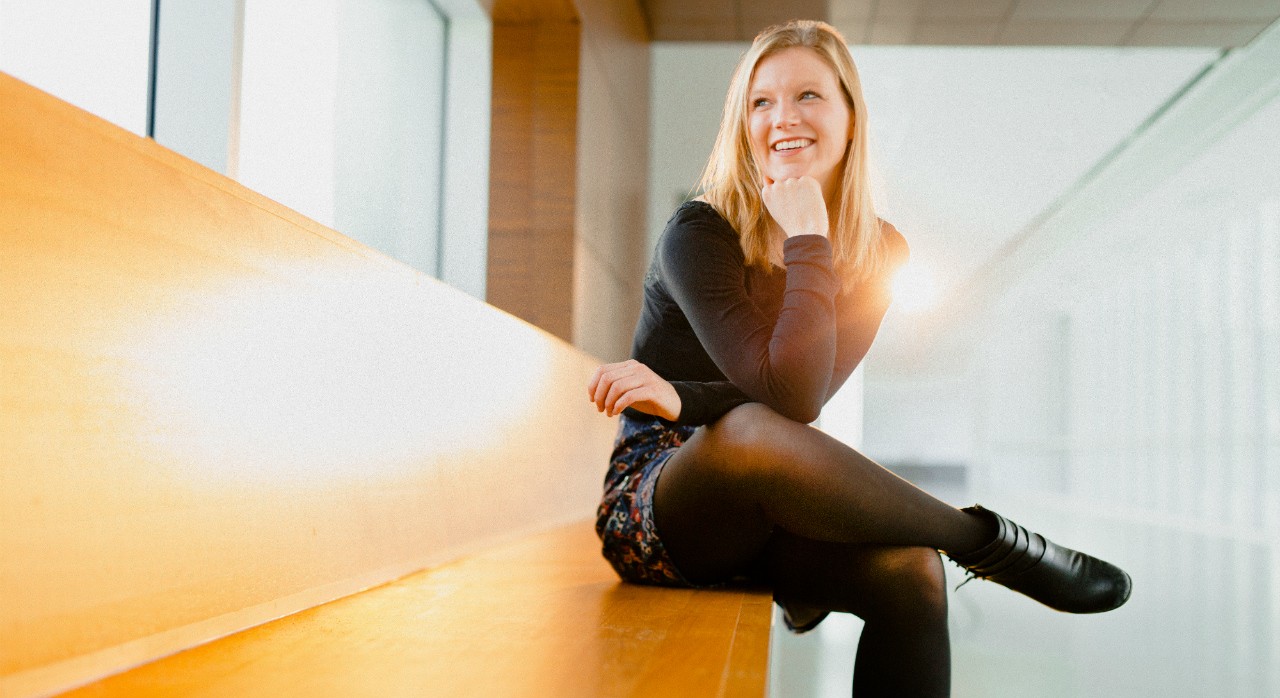 U of A medical student Julia Sawatzky will head to Oxford next fall as a 2019 Rhodes Scholar. (Photo: Jordon Hon)

Second-year medical student Julia Sawatzky will head to Oxford University next fall as the University of Alberta’s 2019 Rhodes Scholar.

"I couldn't believe I was selected,” said Sawatzky of receiving the phone call from the Rhodes Trust two weeks ago. “I was just so overwhelmed to hear I'd been successful."

The Rhodes Scholarship is considered the most prestigious in the world. Each year 11 are awarded across Canada, three in the West.

Sawatzky will study tropical medicine and public health policy, especially as they apply to young populations in sub-Saharan Africa. But her interest in health and the human body was first sparked by a more artistic pursuit—ballet.

As a dedicated dancer most of her life, she attended high school at Calgary’s School of Alberta Ballet before continuing her dance training at the University of Saint Andrews in Scotland. While earning a bachelor’s degree in medicine, she fell in love with contemporary dance and is now a member of the U of A’s MOD Contemporary Dance Movement troupe.

"I took a year off dance when I started med school because I thought I wouldn't be able to balance the time commitments,” she said. “But I learned during med school that without dance, it was really hard—there was no creative release.

“I get so much inspiration from it, and it's a good way for me to process things, so I came back to it."

While at Saint Andrews, Sawatzky won an R&A International Scholarship, which sent her to Tanzania in 2017 to take part in a four-month community research project in collaboration with Tanzanian medical students at the Kilimanjaro Christian Medical College Hospital.

“To this day, the friendships I made there inspire me to return again and again to the region, learn deeply about the people and culture, and pursue a medical career that will allow me to contribute meaningfully to communities that have already given me so much as a learner,” she said.

As part of the same scholarship, she did another stint in Guinea with MindLeaps, an international NGO that uses dance to help out-of-school youth make the transition into formal education.

“That experience, working in an arts-based educational initiative, really broadened my horizons in understanding the social determinants of health and the true complexity of childhood well-being,” she said.

Last June she went back to Africa, this time to Rwanda, where she worked on digital storytelling for children in the dance program, and developed tools for sexual and reproductive health education.

“What I've learned from taking dance into different settings, and growing with it, is the capacity to tell stories,” she said.

As part of a pediatric malaria program run by Michael Hawkes, assistant professor in the Department of Pediatrics and adjunct professor in the School of Public Health, she also spent a month last summer in Uganda.

According to Hawkes, Sawatzky demonstrated “a mature ability to navigate cultural and linguistic barriers and meaningfully immerse herself in the Ugandan medical environment.“

She also showed “a genuine willingness to learn the stories of each individual patient and of the Ugandan health-care system more broadly,” he said.

Sawatzky credits all of her experiences as well as her two years in medical school as reasons she earned the prestigious scholarship.

“I’ve learned and grown so much over my two years here, and I’m certain that a Rhodes scholarship never would have been possible for me without the vibrant community of teachers, mentors, classmates and friends here who’ve made me the person that I am,” she said.

Once she returns from Oxford and completes her medical degree, Sawatzky hopes to practise pediatric medicine while continuing to conduct research, eventually moving into a global health leadership role and advocating for “meaningful policy change.”

Along the way, she’d like to explore ways to infuse her passion for dance.

"I saw in my medical education how it's about more than just science,” she said. A more creative perspective “helps us understand how people experience life, illness and the world."