One of CBC’s best poetry books of 2017 and a stint on faculty at Banff Centre are just two recent accomplishments for Billy-Ray Belcourt. 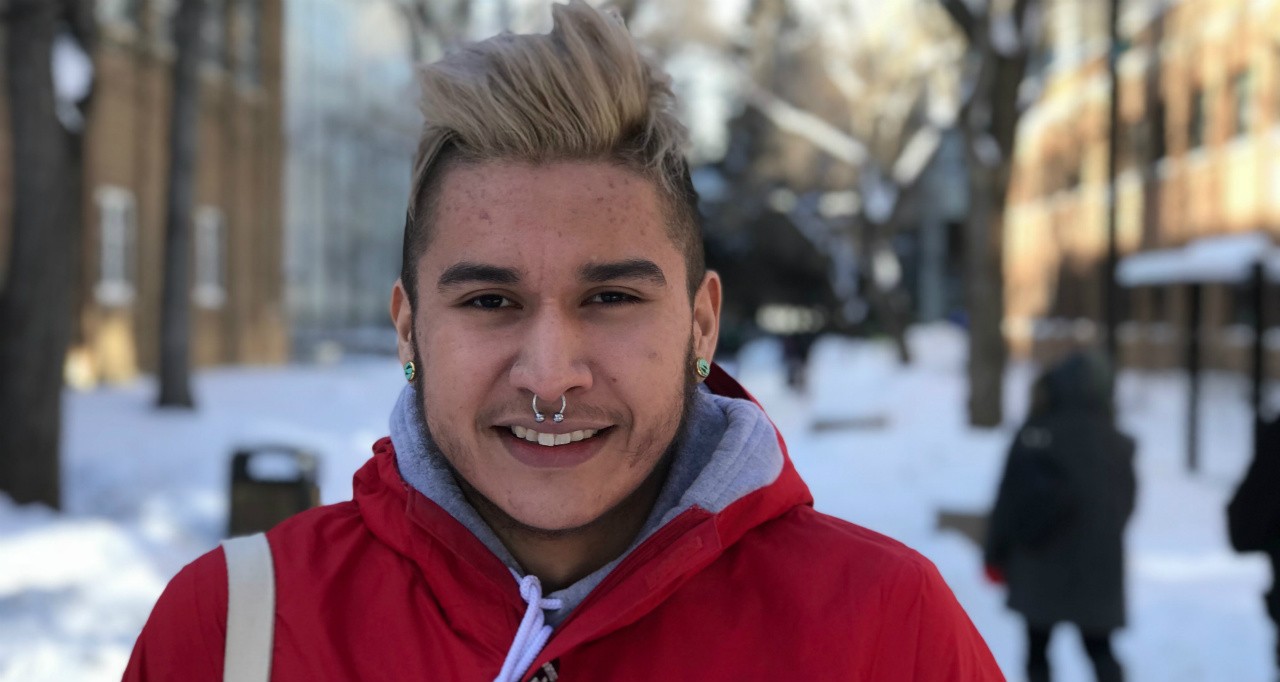 Billy-Ray Belcourt has kept busy since returning to UAlberta from Oxford, where he studied as a Rhodes Scholar. His poetry book was named one of the best of 2017 by CBC, and he taught writers at the Banff Centre. (Photo: Geoff McMaster)

Billy-Ray Belcourt was teaching creative writing to mostly First Nations inmates at the Edmonton Remand Centre last fall when one of them said, “I honestly didn’t know that Indigenous people could be poets.”

It was a “breakthrough moment” for everyone in the class, said Belcourt, including himself.

“It pointed to the fact that our horizon of possibility is so limited, that the idea of being an Indigenous poet is unthinkable,” he said. “I never envisioned myself to be a writer either, growing up. It's something I just stumbled into."

If he stumbles, Belcourt does it with purpose and no small degree of intelligence, pushing that “horizon of possibility” everywhere he goes.

After being raised by his grandmother on the Driftpile Cree Nation reserve in northwestern Alberta, he received support from his band to study comparative literature at the University of Alberta, where he became an advocate for LGBTQ and Indigenous communities and served as president of the U of A’s Aboriginal Student Council.

In 2015 he became the first-ever First Nations student from the U of A to win a Rhodes Scholarship. His stay at Oxford University expanded his horizon yet again, he said, mainly because of friends he made from all over the world, and the local travelling he did with the varsity volleyball team.

The intellectual fit, however, was less than perfect. "As a person doing Indigenous studies, I didn't really have the faculty support to do the project in political studies. No one was doing work on peoples of North America.

Anxious to get on with his academic journey, he opted for a one-year master’s degree in women’s studies, looking at the role of Indigenous women in social resistance movements such as the Dakota Access Pipeline protests of 2016.

Then it was time to move on. He applied to four universities for doctoral studies and was accepted by all, including University of California-Berkeley, the University of Toronto, the U of A and Oxford. In the end, the U of A stood out as the obvious choice.

"I chose the U of A because I knew I had a community of support here, one I didn't have at Oxford,” he said. “Here I feel I can thrive, make a difference and be someone people do see as a leader.

“But it’s also close to home. My sister had a baby in September, and I wanted to be there for her and be part of the child's life."

From Rhodes Scholar to poet and teacher

Since finishing at Oxford last spring, Belcourt has published a volume of poetry called This Wound is a World with Frontenac House in Calgary, selected by the CBC as one of the 10 best Canadian poetry books of 2017. Largely autobiographical and “dramatically edgy,” it explores “love, desire, heartbreak and intimacy,” he said.

“It’s a queer Indigenous text, and we don't have a lot of that in Canada. That was its appeal—I was rendering an experience that the Canadian public hadn't read a bunch about.”

That book led to another golden opportunity. After reading his poetry at Wordfest in Calgary last fall, Belcourt received an email out of the blue asking if he’d like to teach at the Banff Centre, helping a small group of writers with their manuscripts over a couple of weeks in January. Accepting that dream job was a no-brainer, he said.

Now back on campus in the Department of English and Film Studies, Belcourt plans to examine what he calls the “Indigenous paranormal” in art, poetry and film produced by Canada’s First Nations.

“Not just as stereotypical ideas about ghosts and haunting, but also what it means to follow the normal or natural as someone who in the past experienced violence—particularly the horrors of residential schooling, reservations, and of murdered and missing Indigenous women.

“I want to think about how artists make sense of a past that still repeats," continuing to surface through Indigenous cultural production, he said.

It’s a lot of success for someone so early in his career. One wonders if it ever feels overwhelming, especially as the realization dawns that he’ll likely wear the mantle of Indigenous leadership for years to come.

"It is a lot of pressure, but I try to keep a sense of humour,” he said. “I also want to try to dispel some of the myths of being a leader, or widen the boundaries of what a leader can do,” as in less top-down, and more by example.

And does he chafe at the incessant media attention?

"Part of it is just waiting for it to stop,” said Belcourt. “When are they going on to someone new, someone shinier? But that isn't happening.”

And so he’s reconciling himself to his role as a public figure, happily accepting a growing number of speaking engagements, forging a brand on his website and through social media, and doing the grassroots activist work that has come to define him, such as teaching at Edmonton’s Learning Centre Literacy Association.

"For now, I'm just riding the tide and spreading the word.”