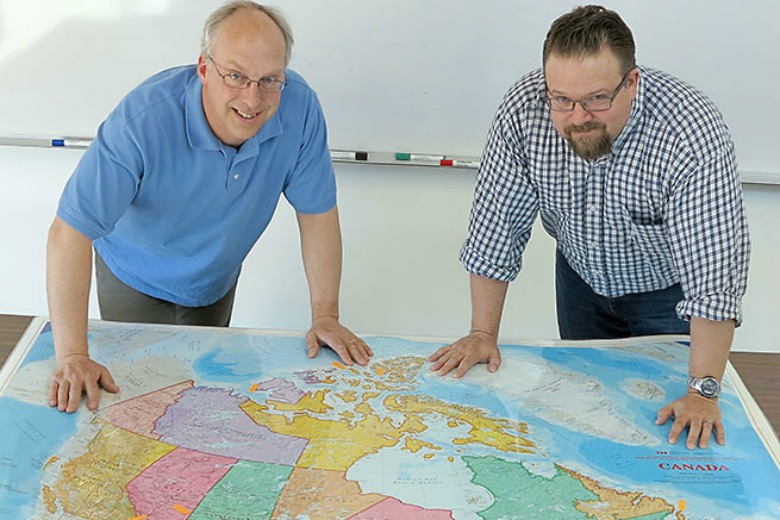 The Canadian Sustainability Plan Inventory (CSPI) was developed by researchers Lars Hallstrom and Glen Hvenegaard in collaboration with several partners. Since its launch earlier this year, it has had 889 online hits—with 27 per cent of visitors returning for more information.

“We received a lot of phone calls from municipal sustainability officers and administrators when we rolled out this database, saying it was a fantastic idea,” said Hallstrom, director of the U of A’s Alberta Centre for Sustainable Rural Communities.

Drought, uneven crop prices and “urban brain drain” challenge the existence of rural communities, so having a solid plan that pinpoints what is truly important to a community—often from a wide-ranging vision—is crucial to making balanced municipal decisions when budgeting precious resources, said Hvenegaard, professor of environmental science and geography at Augustana Campus.

“Some rural communities are surviving on a thread, and sustainability plans provide an opportunity for people to envision the future. The reality is that they often don’t have the next steps articulated within those plans,” he said.

That’s where the CSPI comes in. The largest and most comprehensive database of its kind in Canada, it is also the only text-searchable one, allowing community planners to see what their neighbours and peers are doing to plan for future economic, social, environmental and governance sustainability, which opens the door to collaboration and sharing ideas. The database, which is also free and publicly accessible, can be searched using variables such as community size, province and plan type.

The CSPI holds more than 1,000 sustainability plans from communities of less than 50,000 people from across Canada, including 199 from Alberta.

Sustainability planning in rural Canada has become particularly important since the Federal Gas Tax Fund made it a key part of overall development for communities, Hallstrom noted. Slated by 2015 to invest about $13 billion in municipal infrastructure such as transit, waste management, water and green energy, the fund also gives support to communities to develop integrated community sustainability plans.

The idea for a comprehensive database of sustainability blueprints gained steam after a 2010 conference hosted by the Alberta Centre for Sustainable Rural Communities, which brought researchers and community partners together from across Canada, to explore planning issues. Already primed by an Augustana Campus project that provided a municipal sustainability plan for the City of Camrose, Hallstrom and Hvenegaard took the idea further by applying it to the rest of the country.

“The process of creating a plan for Camrose got the creative juices flowing and we began to explore the progress of other plans across Canada and making some of them available for other communities to learn from,” Hvenegaard said.

“Community planners can use this database as a resource to inform their own programming and sustainability initiatives; they can say, ‘look, Hinton did this, Wood Buffalo has done that,’” Hallstrom added. “It saves them a lot of time and energy in trying to find answers in comparable strategies, since they can see what others are doing.”

The CSPI project was supported by the Social Sciences and Humanities Research Council of Canada, the Alberta Rural Development Network, Alberta Urban Municipalities Association, Canadian Federation of Municipalities, the Alberta Centre for Sustainable Rural Communities and the University of Alberta.