Righting the wrongs of misfolded proteins

I don’t know how many billions of dollars have been spent on failed drugs for neurodegenerative diseases. Part of this is lack of clarity in what is going on at the molecular level in these very complex diseases and the need for better tools like the custom tools that we have developed. 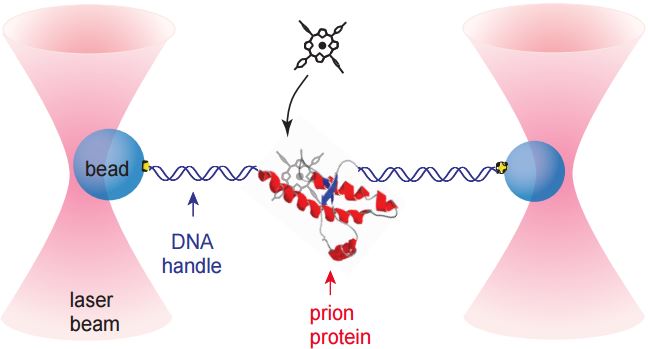 A team of scientists from the University of Alberta is examining compounds with anti-prion properties, which can alter the misfolding of proteins in rare but universally fatal prion diseases like "Mad Cow" and Creutzfeld-Jakob. Their results have just been published in Nature Communications.

“The goal of our work is to figure out how to address protein misfolding diseases,” says Michael Woodside, professor in the Department of Physics, cross-appointed at the National Institute for Nanotechnology. “There are a number of things that can go wrong if you don’t have the right protein structure. There’s a wide range of diseases associated one way or another when proteins convert into the wrong shape.” These diseases include not only Mad Cow and Creutzfeld-Jakob, but also Alzheimer’s, ALS, Parkinson’s and Huntington’s.

Woodside explains that though the causes of diseases associated with protein misfolding are often hotly debated, it is undeniable that the misfolding of proteins in each creates a cascade-like effect of problems. He and his colleagues—including Valerie Sim from the U of A's Faculty of Medicine & Dentistry—are working to get at the root of the problem, right down to the molecular level.

“Our results are surprisingly similar to how some of the machinery in healthy cells functions to keep misfolded proteins at bay,” says Woodside. “What we have found is that the effect of the anti-prion compound is more complex than we originally thought. It not only stabilizes the correct structure, it also inhibits the interactions that drive the formation of stable incorrect structures.”

The anti-prion compound Woodside’s group studied is geared to maintain the native cell structure and prevent misfolding, but the drug discovery and development process has been hampered by incomplete understanding of how these compounds act.

“We are addressing a problem that has proven really difficult,” says Woodside. “I don’t know how many billions of dollars have been spent on failed drugs for neurodegenerative diseases. Part of this is lack of clarity in what is going on at the molecular level in these very complex diseases and the need for better tools like the custom tools that we have developed.”

A biophysicist, Woodside works with custom-designed and custom-built laser tweezers to study these protein folding and misfolding processes at the single molecular level. His research explores a broad range of science from physics to biochemistry. Biophysics—understanding the basic rules of science that govern essential interactions in biology—is one of the fastest-growing fields in physics.

And in this vein, Woodside aims to take an extremely complex problem back to basics. “We are measuring very small forces in single molecule biology systems. Watching these folding processes at the molecular level provides us a lot of exquisitely detailed biophysical information. We want to understand what a single protein molecule does when it comes into contact with therapeutic drugs. What do the dynamics of this folding look like in the presence of the compound?”

“Pharmacological chaperone reshapes the energy landscape for folding and aggregation of the prion protein” is published in the June 27 issue of Nature Communications, a widely read and open-access interdisciplinary journal.