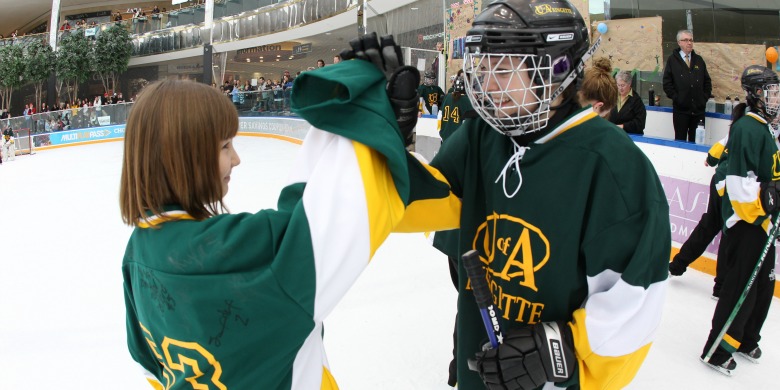 121115-ringettecharity-banner
Champions on and off the ice: The U of A Ringette team has raised $250,000 over the last three years through its Ringette Scores on Cancer fundraiser. (Photo: Perry Mah)

(Edmonton) The U of A Ringette team is used to cheering crowds after a goal during game action at the University of Alberta, but winning praise for their charity efforts to fight cancer is a first.

In three years of hosting the Ringette Scores on Cancer tournament at West Edmonton Mall, U of A Ringette has tallied $250,000 for cancer research through the Alberta Cancer Foundation. The team’s commitment to giving earned it a National Philanthropy Day Award from the Edmonton chapter of the Association of Fundraising Professionals.

“I am incredibly proud of the girls, who put in the tremendous effort over the last three years with Ringette Scores on Cancer,” says coach Paul Hotke. “When you think it’s 18 university students doing this and they’re all carrying full course loads—in addition to a heavy load playing on this team—for them to organize this thing is truly a testament to what undergraduate post-secondary students can accomplish when they work together.”

The reigning Canadian national champions’ fundraising efforts started five or six years ago when the ringette club hosted an annual charity game against local media. The first few incarnations raised $500 for the Cross Cancer Institute, Hotke says, but the girls wanted to do “something bigger.”

Ringette Scores on Cancer was born, featuring novice, petite, tween and junior teams from across Alberta. The event has grown every year; last year 21 teams joined forces to raise almost $100,000 for research at the Cross.

Fourth-year mechanical engineering student Chelsea Morin says her experience with Ringette Scores on Cancer has had a profound influence on her—to the point that she wants to make a difference in kids’ lives as a pediatrician.

“It’s been fantastic, just some of the different people we’ve met, hearing some of the inspirational stories of beating cancer,” says Morin, 21. “It’s such a great atmosphere the entire weekend.”

Taylor Clelland, a third-year education student eyeing a career as a math teacher, called the event remarkable to experience, from planning to competition to meeting celebrities like former NHLer Georges Laraque and figure skater David Pelletier.

“It feels good to see it first-hand and be around the people who appreciate it,” says Clelland, 20. “Definitely, it’s humbling. We talk to so many people and everyone has stories about how they’ve been affected by cancer.”

It was their dedication to helping patients with cancer and their families that led the Alberta Cancer Foundation’s Charissa Spencer to nominate the team for the award. Spencer, manager of special events overseeing a group that works with charity organizers across the province, says it’s amazing to see what the team has done in a few short years.

“I’ve been with the foundation for five years and I’ve never come across a sports team that’s this philanthropic and this involved in raising funds for the Cross Cancer Institute or for any centre funded by the Alberta Cancer Foundation,” Spencer says. “This is a very special sports team that has a really big heart.”