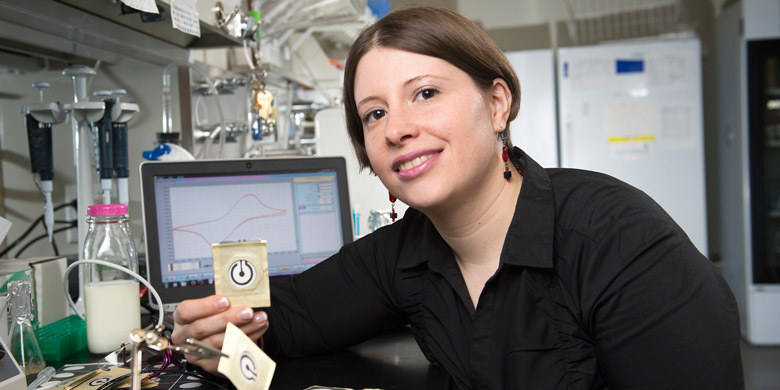 Frédérique Deiss shows off a design concept of her idea for a paper-based test to detect pathogens in food and water. (Photo: Richard Siemens)

(Edmonton) A University of Alberta researcher’s star is rising thanks to her idea to detect deadly pathogens such as E. coli using a paper device only slightly larger than a postage stamp.

Frédérique Deiss, a post-doctoral fellow in the Faculty of Science, is working on ways to help detect food- and water-borne pathogens using a paper-based diagnostic tool that could be used anywhere, including developing countries. The idea earned the electrochemist $112,000 in research funding from Grand Challenges Canada after being selected as one of their Stars in Global Health.

For the next 18 months, Deiss will be working at the U of A and with farmers near Nairobi, Kenya, in collaboration with the International Livestock Research Institute, to develop and test a prototype that provides an affordable method for detecting pathogens such as salmonella or E. coli, which can be present in raw milk, on equipment, or in water or waste water.

“Some areas do not have the infrastructure to do this kind of monitoring all the time. These devices are simple and sensible enough to use that farmers could almost do the tests themselves, and test every day rather than once a week or even more sporadically,” said Deiss, who is working in the lab of Ratmir Derda.

Deiss met Derda, also a past Star in Global Health, when they were post-doctoral researchers at Harvard University. When presented with an opportunity to join his lab in the U of A’s Department of Chemistry, she took it.

“When I visited the U of A and toured the lab and the Centennial Centre for Interdisciplinary Science, I thought, ‘Wow, this is a university where I would have the opportunity to make my ideas happen, even as a post-doctoral fellow.’”

From idea on paper to paper device

Her idea for a diagnostic tool made of paper is just that at the moment—an idea. Funding from Grand Challenges Canada will allow her to develop an electrochemical diagnostic device made of paper and tape. Conductive ink applied to the paper would create an electrode that would allow researchers to detect the presence of targeted bacteria.

Slightly larger than a postage stamp and even cheaper to make at less than 10 cents, the device would be extremely portable, self-contained and sealed—meaning anyone performing the tests would not risk exposure to potentially harmful bacteria, Deiss said. It would also allow testing of non-purified samples—a time- and cost-saving step not possible in some parts of the world, including farms around Nairobi, she added.

Within six months, Deiss hopes to develop a working prototype capable of detecting non-pathogenic bacteria, and by one year a device able to safely detect deadly pathogens such as E. coli. She also plans to work with ILRI and farmers in Nairobi to test the device in the field, comparing results with conventional methods.

In addition to addressing the problem of food safety in developing countries, Deiss said the Stars in Global Health award, her first research grant as principal investigator, provides an important confidence boost early in her career.

“It’s more validation as a young researcher that my idea is interesting to other people, to feel that I can actually change something.”