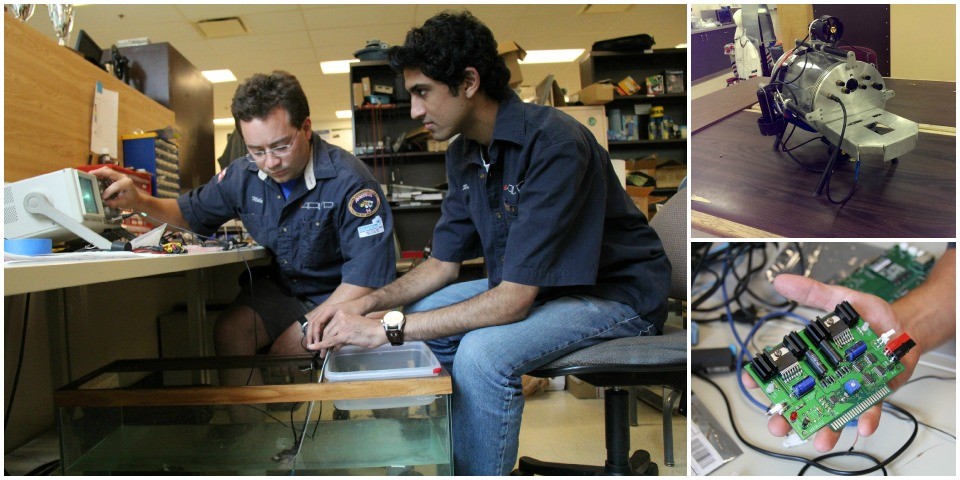 (Clockwise from left) ARVP team lead Mike Bujold and teammate Rumman Wagar work on a demonstration of their robotic submarine's sonar system; the UAlberta team's robot competitor; a circuit board from the robot submarine.

(Edmonton) A team of engineering students at the University of Alberta is taking its submersible robot to an international competition to face off against teams from around the world.

More than 30 teams are gathering in San Diego, Calif., this week for the annual RoboSub Competition. The Faculty of Engineering’s Autonomous Robotic Vehicle Project (ARVP) team will put its battery-powered submarine, which is a little more than a metre long, through a demanding underwater obstacle course. They’ll also be scored on a technical paper and a presentation about their vehicle’s design.

The submarine needs to perform a series of tasks without being controlled or assisted by the team. Subs are required to submerge themselves in a large pool, and follow a coloured path along the pool floor. Their first challenge is to strike a buoy. In some cases, the buoy flashes green or red, and if a sub bumps into it while the green light is on, it earns extra points.

“That’s where a little luck comes into it,” said team leader Mike Bujold, adding that the sub ideally will stop itself, then calculate when to power up its thrusters and bump the buoy.

Other tasks include a sort of parallel-parking exercise in which the sub positions itself between two objects, a torpedo competition in which subs fire off small projectiles through colour-coded targets, and a sonar challenge in which the subs use sonar to find a certain spot in the pool, then surface directly above it.

The team members expect that as the three-day competition progresses, they’ll be kept busy trouble-shooting problems that arise.

It has taken the team a year to prepare this year’s sub, but when a competition deadline is looming, members have learned they can accomplish a lot in just a few hours.

“We all tend to work a lot faster when we’re under the clock,” said team member Rumman Wagar, who is entering his third year of electrical engineering, in the engineering co-op program.

Wagar and Bujold both say that taking part in student projects like ARVP enriches their education and improves job prospects. Bujold, who graduated this spring with a degree in computer science and is now working as a systems developer with Virgin Technologies in Edmonton, says his employer is “pretty enthusiastic” about him taking time off work to attend the competition. After all, he says, ARVP is partly responsible for him getting a job in the first place.

“A lot of the things I’ve done with ARVP have been useful, transferable skills,” he said. “And when people would look at my resumé, the first thing they’d want to talk about was ARVP.”

Wagar says he joined the club when he entered his first year of engineering because he was interested in robotics. Because of his participation in the group, he says, he chose to study electrical engineering. And, he says, ARVP has helped with his studies.

“I took courses in my second year, and we were learning about things I had already done,” he said. “It’s such a wonderful feeling when that happens.”

The RoboSub competition runs until Aug. 3.