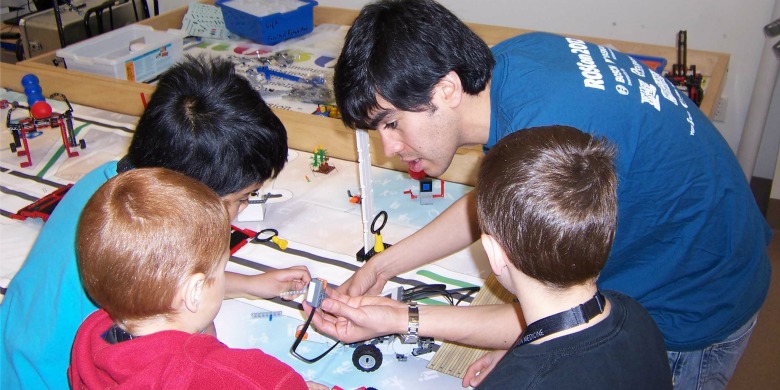 130118-legorobots-banner
With help from UAlberta's Faculty of Rehabilitation Medicine, kids in Edmonton got to build, program and test LEGO robots.

(Edmonton) Edmonton children, including home-schooled students and kids with special needs, are getting a hands-on opportunity to help seniors lead healthier lives, thanks to scientific know-how and some robotic help from the University of Alberta.

The Faculty of Rehabilitation Medicine sponsored two teams of children, aged eight to 11 years, who are competing in the annual FIRST Lego League Championship Jan. 19. This year’s goal is to improve seniors’ quality of life, and the U of A teams are showing how technology can help with tasks such as finding and picking up healthy foods in the grocery store and helping seniors stand up after gardening.

“It’s a thrill, the highlight of my week,” said project co-ordinator Kim Adams, an assistive technology researcher in rehabilitation medicine with a joint appointment at the Glenrose Rehabilitation Hospital. “It has been really neat to see the kids problem-solve and watch how everything has progressed, from getting the LEGO structures on the robot game table to doing the hard part and programming the robots, and figuring out what parts to use to accomplish each task.”

Every weekend since October, the Rehab Robotics lab in the Edmonton Clinic Health Academy has been abuzz as the teams—“Bad News Bears” and “Rock’em Sock’em”—have built, programmed, tested and retested their robots. Adams said the 12 kids have overseen the project from start to finish, including talking to a local senior to learn about day-to-day challenges older people face.

“It’s a lot of work that they’re asking the kids to do,” Adams said. “There are 12 different tasks for the robots to complete on the table, and that means a lot of programming for the kids. For beginner teams, we did three—and that’s doing well.”

In addition to sponsoring the teams, rehabilitation medicine has provided expertise from the likes of Adams, who works with robots while developing learning tools for children with severe physical disabilities. Graduate students from the faculty and the Department of Computing Science have also lent a hand coaching, as have other student mentors and faculty who have worked with the children and given special presentations.

All welcome at the Rehab Robotics lab

One of the faculty’s goals was to work with children from the neighbouring community plus children who don’t always get such inclusive opportunities, including home-schoolers and kids with special needs such as autism.

For one Edmonton mother, the Rehab Robotics lab has been a welcoming environment for her 11-year-old son Quinn, who has high-functioning autism. Christine, who declined to provide her last name because her son was only recently diagnosed with autism and is selective about whom he tells about the condition, says Quinn has thoroughly enjoyed working with the robots and problem-solving until a task is complete.

The experience has also allowed Quinn to work with other kids in an inclusive social setting.

“Quinn is the type of kid who would more enjoy time in his room with a book than playing with others,” Christine said. “So this has been really neat because ideally, my goal is to give my kids that inclusive environment.

Watch one team’s robots in action