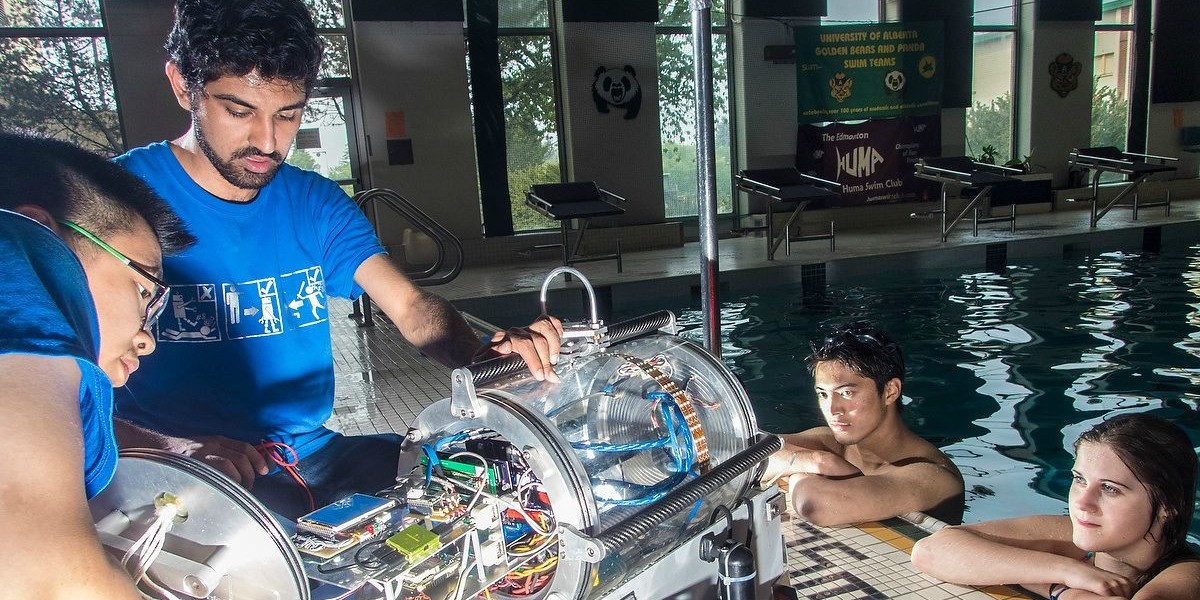 Members of the UAlberta Autonomous Robotic Vehicle Project test their sub in the waters of the Van Vliet Centre pool.

(Edmonton) A group of engineering students hopes to make a splash with a robotic submarine they designed and built, during an international competition being held in California this week.

Seven members of the University of Alberta Autonomous Robotic Vehicle Project are attending the 2015 Association for Unmanned Vehicle Systems International RoboSub competition. Each team is required to set their autonomous submarine through an underwater obstacle course.

The Faculty of Engineering team is facing off against about 40 others from universities all over the world. The competition blends engineering disciplines and often requires participants solve problems on the fly.

“What the organizers want us to do is create something that is autonomous and kind of has its own intelligence to it,” said Alvin Ly, a mechanical engineering student who is co-leader of this year’s team.

At the outset of the competition, teams are given an outline of the obstacle course, but very few details. For example, they know the submarine will have to pass through a gate, locate and hit a buoy, perhaps pick up an object, sense a sound and locate its source, and then surface above the sound source.

But no one is given a map of the course. That would make things easy. Instead, the self-guided vehicles are only given the location of the first gate they need to pass through. After that, they have to figure things out on their own.

“In the initial qualifying runs our job is to get the vehicle through the gate,” said Ly. “That sounds simple, but in reality only about 30 of the 40 teams will even get that far and advance from there.”

The team’s vehicle has cameras mounted in the front and back for its “eyes” and uses hydrophones as its “ears.”

“Once it gets through the gate it says, ‘OK, I just passed through the gate. Now I’m supposed to locate a buoy,’” said Rumman Wagner, a fourth-year electrical engineering student.

Ly added that the team has been fortunate this year to have its vehicle in operating condition for some time. It has been tested in the Van Vliet Fitness Centre pool for at least 20 hours.

“We’ve been lucky to get so much testing time in this year,” said Ly. “It hasn’t always gone well, but that’s what testing’s for.”

Aside from crossing interdisciplinary engineering and computer science boundaries, the project requires students to take on business and administrative tasks.

“We have a business team in itself,” said Ly. “Business is an equal part of the team. They book the pool times, they get us our sponsorships—technical skills are important but in engineering you also need to have those soft skills. We all have technical skills, but these are the kinds of other skills that you only learn by being in a group like this.”