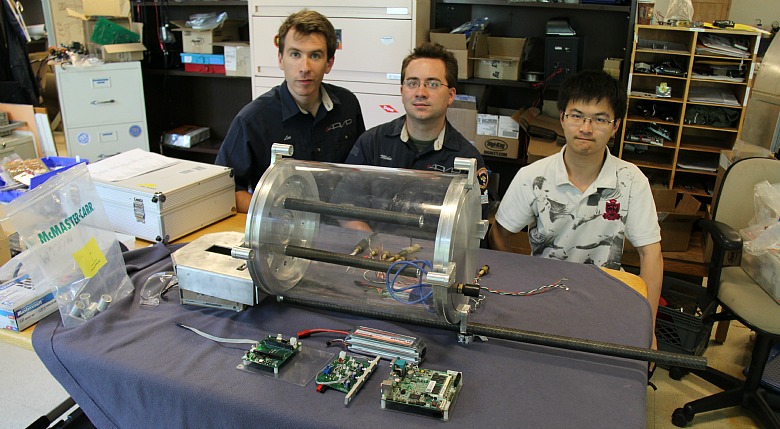 (Edmonton) A student team based in the University of Alberta’s Faculty of Engineering has taken its underwater robotic vehicle to an international competition in the United States this week.

“It’s sort of like an underwater obstacle course for robotic vehicles,” said team lead Mike Bujold, who is in his fourth year of computing science. “The robot has tasks it is required to do autonomously.”

Ten team members are making the trip to a U.S. Navy facility in San Diego, which hosts the annual RoboSub competition. There, they will compete against more than 30 teams from around the world.

The U of A team’s underwater vehicle is equipped to complete its tasks with visual identification software that allows it to “see” where it is going and “recognize” specific shapes. Sonar also helps the vehicle know where it is relative to other objects.

The first step for all teams is to submerge their vehicle and have it steer through a gate, just to prove it is operable. Things get more complicated after that.

There are vision tests for shapes and colours, and each vehicle is required to detect a certain shape or colour, follow the path segments on the pool floor and use those markers to determine where it is supposed to go.

There are also marked bins at the bottom of the pool that the vehicles are supposed to recognize and drop objects into.

Bujold says taking part in teams such as the Autonomous Robotic Vehicle Project enhances learning because it gives participants hands-on experience and allows them to test what they have learned in real-life settings. The team is divided into three groups: software, electronics and mechanical.

Joining the group comes with “a steep learning curve,” says Bujold, but “it definitely gives you a kick-start because members of the group teach you new things, and when it comes time to learn it in the classroom, you have already done it physically.”