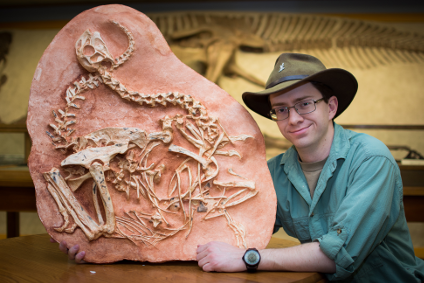 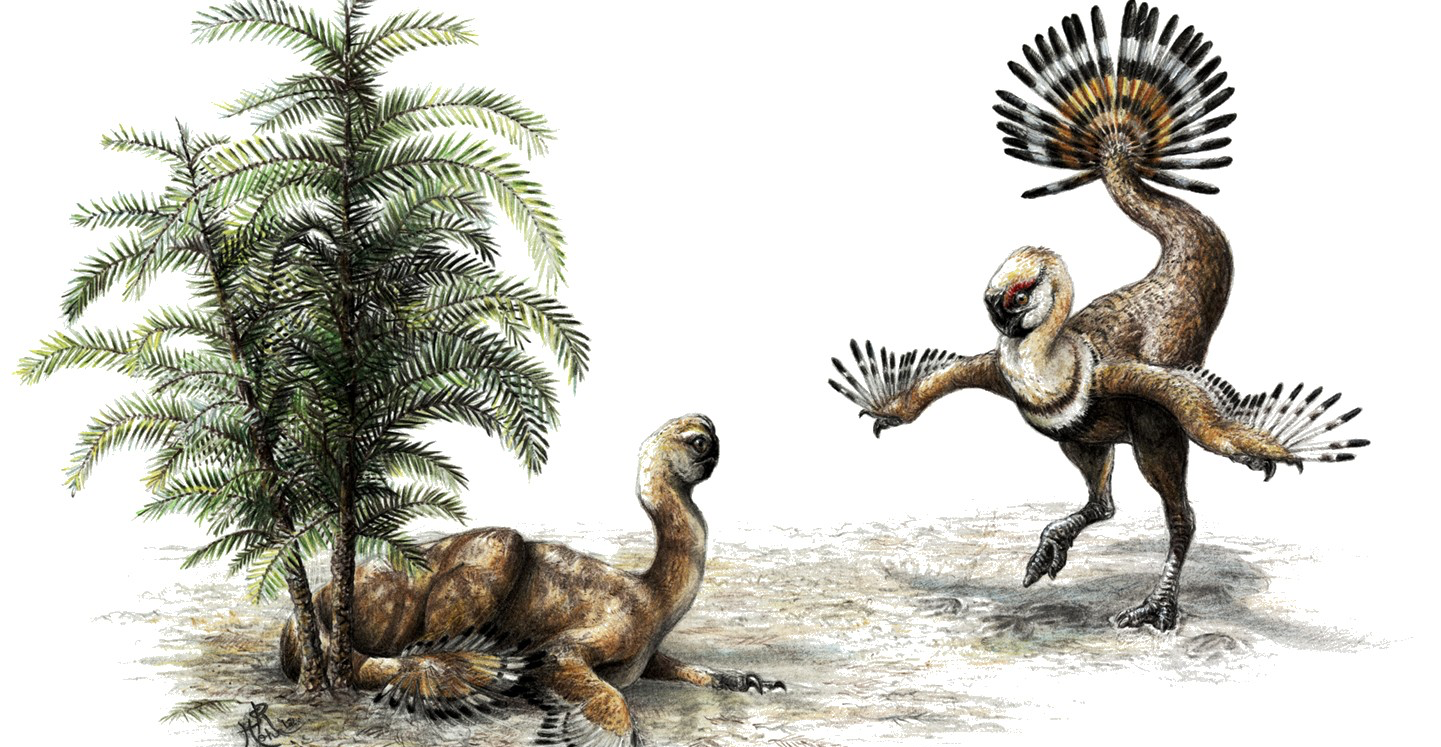 Artist's conception of an oviraptor using its tail feathers in a mating display. (Illustration: Sydney Mohr)

(Edmonton) Paleontologists at the University of Alberta have discovered evidence of a prehistoric romance and the secret to sexing some dinosaurs.

“Determining a dinosaur’s gender is really hard,” says graduate student Scott Persons, lead author of the research. “Because soft anatomy seldom fossilizes, a dinosaur fossil usually provides no direct evidence of whether it was a male or a female.”

Instead, the new research focuses on indirect evidence. Modern birds, the living descendants of dinosaurs, frequently show sexually dimorphic display structures. Such structures—like the fans of peacocks, the tall crests of roosters or the long tail feathers of some birds of paradise—are used to attract and court mates, and are almost always much larger in males (who do the courting) than in females (who do the choosing).

Back in 2011, Persons and his colleagues published research on the tails of a group of birdlike dinosaurs called oviraptors. Oviraptors were strictly land-bound animals, but according to the study, they possessed fans of long feathers on the ends of their tails. If these dinosaurs weren't able to fly, what good were their tail feathers?

“Our theory,” explains Persons, “was that these large feather fans were used for the same purpose as the feather fans of many modern ground birds, like turkeys, peacocks and prairie chickens: they were used to enhance courtship displays. My analysis of the tail skeletons supported this theory, because the skeletons showed adaptations for both high tail flexibility and enlarged tail musculature—both traits that would have helped an oviraptor to flaunt its tail fan in a mating dance.”

The U of A researchers took the idea a step further. “The greatest test of any scientific theory is its predictive power,” says Persons. “If we were right, and oviraptors really were using their tail fans to court mates, then, just as in modern birds, the display structures ought to be sexually dimorphic. We published the prediction that careful analysis of more oviraptor tails would reveal male and female differences within the same species.”

That prediction has come home to roost. In the new study, published this week in the journal Scientific Reports, Persons and his team have confirmed sexual dimorphism, after meticulous observation of two oviraptor specimens. The two raptors were discovered in the Gobi Desert of Mongolia. Both died and were buried next to each other when a large sand dune collapsed on top of them.

When they were first unearthed, the two oviraptors were given the nicknames “Romeo and Juliet,” because they seemed reminiscent of Shakespeare's famously doomed lovers. It turns out that the nickname may have been entirely appropriate.

“We discovered that, although both oviraptors were roughly the same size, the same age and otherwise identical in all anatomical regards, ‘Romeo’ had larger and specially shaped tail bones,” says Persons. “This indicates that it had a greater capacity for courtship displays and was likely a male.” By comparison, the second specimen, “Juliet,” had shorter and simpler tail bones, suggesting a lesser capacity for peacocking, and has been interpreted as a female.

According to Persons, the two may very well have been a mated pair, making for an altogether romantic story, as the dinosaur couple was preserved side by side for more than 75 million years.