New exhibit conveys powerful truths about what Indigenous peoples experienced and lost, says U of A curator. 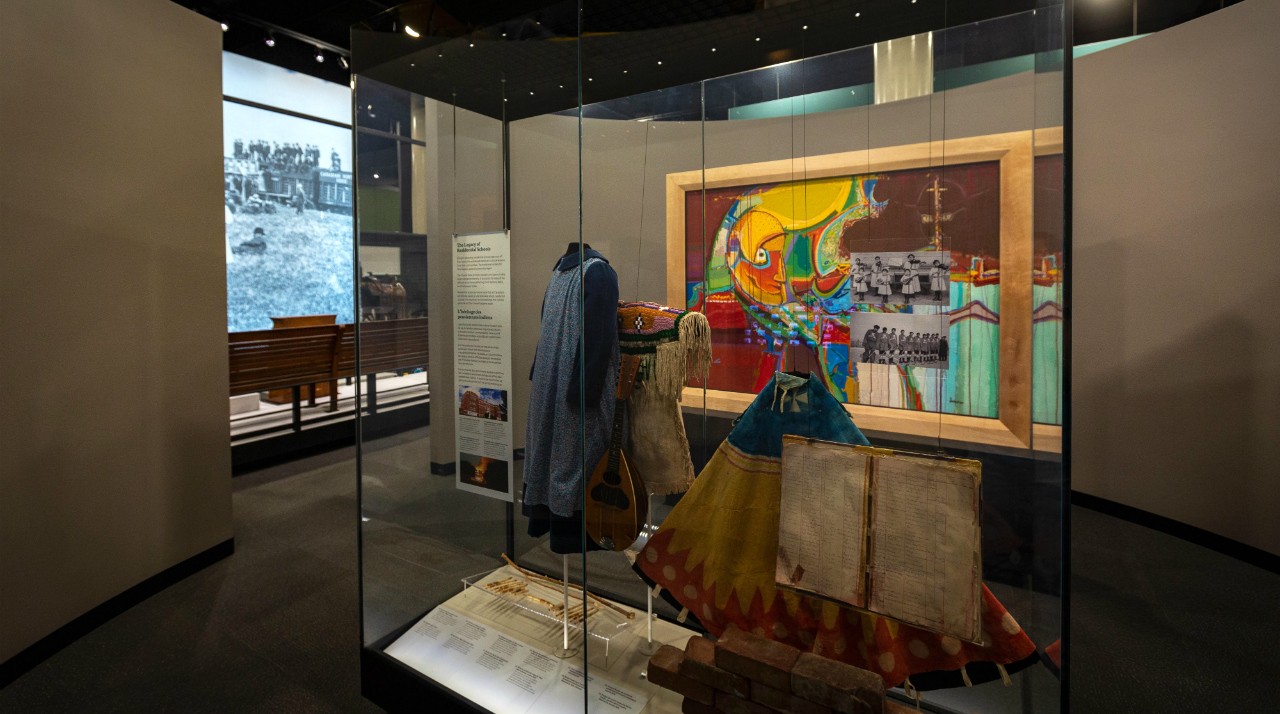 On the main floor of the newly opened Royal Alberta Museum, visitors will find an exhibit that is partially enclosed and features a cautionary panel that warns patrons of the sensitive materials within.

The exhibit features a video of artist and former residential school student Alex Janvier explaining his experience in residential school, and one of his paintings, Blood Tears, which is displayed so visitors can see both the front and the back, upon which Janvier has listed all that he lost as a student in Blue Quills Residential School.

Across from the painting, a glass showcase features materials that face in two directions. On one side are toys and a traditional beaded shirt, things that represent what the life of an Indigenous child was like before residential schools. On the other, a representation of life in a residential school—bricks, a (replica) ledger recording the “Indian name,” “White name,” entrance date and death. Around 40 to 60 per cent of the children who attended residential schools died while there.

“It was hard to balance not re-traumatizing former residential school students and their intergenerational descendants, while ensuring the exhibit conveyed the realities of residential schools to those who may not know much about them,” said Harnett, adding that while she worked on the exhibit, she imagined the audience was children.

“I always think first of kids. Then the Elders.”

An important feature for her to include was the video that plays on an outside wall of the exhibit. The video outlines the history of residential schools and features TRC commissioner Justice Murray Sinclair discussing the Truth and Reconciliation Commission. But the video doesn’t end in reconciliation. It continues, featuring activist Cindy Blackstock, letting viewers know there are more Indigenous children in care now than there were in residential schools at their height.

“I want people to know the plans are still there, the blueprint remains, the strategies remain. The attempts to erase the culture aren’t over,” Harnett said.

What people take away from the exhibit is something Harnett said she considered as she created it.

“You’d think it would be, ‘I want people to know the damage done.’ But that’s not it. It’s more about the truth of this place. Canada 150 has made Canadians ask, ‘What was here before?’ A vacuum was created, and people want to fill it with the truth.”