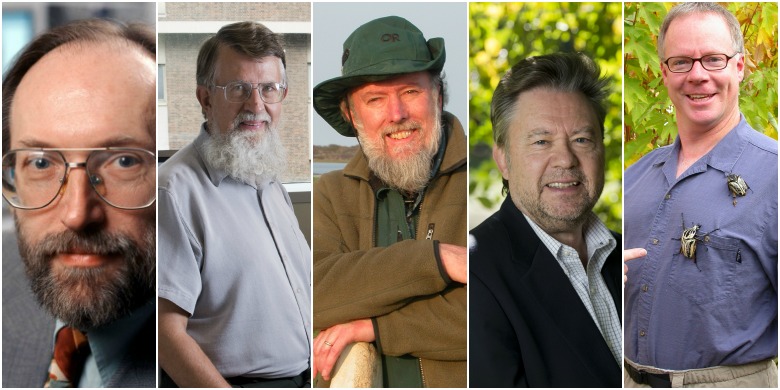 120917-rsccollage-banner
(L-R) Witold Pedrycz, Don Page, John England and Gregory Forth have been elected as fellows to the Royal Society of Canada, and John Acorn has received the society's McNeil Medal for promoting public awareness of science.

(Edmonton) In recognition of their outstanding scholarly and scientific achievements, four University of Alberta faculty members have been elected as fellows to the Royal Society of Canada, and a renewable-resource mainstay has been recognized with the society’s communication award.

The new fellows are electrical and computer engineer Witold Pedrycz, Arctic researcher John England, physicist Don Page and anthropologist Gregory Forth. John Acorn, faculty service officer and instructor in the Department of Renewable Resources, was awarded the McNeil Medal for his efforts to promote public awareness of science.

“I offer my warmest congratulations to our newest Royal Society fellows as well as John Acorn for his award,” said U of A President Indira Samarasekera. “Induction into the Royal Society is fitting recognition of their remarkable scholarship and the transformative impact that they have made within their disciplines.

“They are all outstanding leaders in learning and discovery, and excellent representatives of the University of Alberta.”

The Royal Society of Canada was founded in 1882 and is Canada's oldest and most prestigious scholarly institute. With this year’s inductees, the U of A now has 111 members.

“This award is a grateful reminder of the enormous opportunity that I have been given to cross the entire Canadian Arctic Archipelago—bay by bay, fiord by fiord—exploring so many profoundly beautiful places while sharing this experience with close friends and colleagues,” said England.

A professor in the Department of Earth and Atmospheric Sciences, England is internationally acclaimed for his 45-year survey throughout Arctic Canada reconstructing the behaviour of ancient ice sheets, sea ice and sea level that illuminate our understanding of modern Arctic environments. He is one of Canada’s prestigious NSERC Northern Research Chairs, spearheaded the establishment of Canada’s northernmost national park, is a leading advocate for a Canadian Polar Policy and is actively engaged in mentoring Inuit and Inuvialuit students.

“I feel in many ways that this award also includes my academic community—faculty, post-docs, and grad students—who continue to honour the U of A with so much obvious excellence in northern research, putting the university on the map by elaborating on such appropriate, relevant and exciting knowledge of our own country.”

He added, “The U of A has provided the venue for many resources that have allowed my work to continue—indeed, to have precious continuity—through so many decades.”

Page, a professor in the Department of Physics, counts among his accomplishments no less than four concepts bearing his name, in a range of physics research areas—the Page approximation in black-hole physics, the Page metric in quantum gravity, the Page charge in supergravity and the Hawking-Page transition in black-hole thermodynamics—as well as the refutation of three major claims by Stephen Hawking.

Page gives much of the credit for his successes to RSC fellow, mentor and longtime friend, Werner Israel, who brought Page to the U of A in 1990.

“He built up at the U of A one of the largest and strongest groups in the world in cosmology and black-hole physics,” said Page. “I have greatly benefited from being part of that group.”

Pedrycz, a professor in the Department of Electrical and Computer Engineering, was elected on the strength of his pioneering contributions to computational intelligence and its applications to system analysis. Pedrycz developed fundamental concepts and algorithmic foundations in the disciplines of neurocomputing, fuzzy sets and evolutionary optimization, forming the essence of computational intelligence.

Forth, a professor in the Department of Anthropology, is an internationally recognized social anthropologist and ethnobiologist working in Indonesian studies. His reputation is founded on his extensive field research and the exemplary quality of his numerous books and published papers. Forth’s research on indigenous hominoid images, first published in 1998, anticipated palaeoanthropological research leading to the discovery of Homo floresiensis in 2003.

“The honour indicates that the U of A is able to attract and retain very capable scholars and scientists, which is evidence of the standing of the university, particularly nationally,” said Forth. “It further attests to the strength of anthropology at the U of A. For awhile now, anthropology has been recognized, certainly within the Faculty of Arts, as a strong department. This award lends more proof to that.”

As an internationally acclaimed author, speaker, photographer and broadcaster, Acorn—also known as “The Nature Nut”—makes science fun and accessible, and inspires adults and children to venture outside and engage with the natural world.

“I'm really quite humbled by the award, and it is great to know that the RSC values my style of public education and promotion of science,” said Acorn. He added that it's fun being able to function as an academic on the one hand, and as a popularizer of science on the other.

“It will be a pleasure to keep on promoting science to a general audience, and I'm confident that the U of A is a great place to do so.”