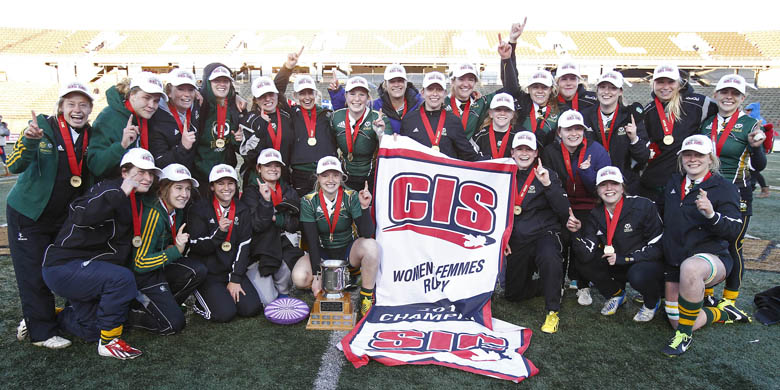 131104-rugbyyan-doublet
The University of Alberta Pandas won the 2013 Canadian Interuniversity Sport women's rugby championship with a 29-10 victory over the University of Guelph Gryphons Nov. 3 in Quebec City. (Photo: Yan Doublet)

(Edmonton) The University of Alberta Pandas rugby team capped off a perfect season by defeating the University of Guelph Gryphons 29-10 in the Canadian Interuniversity Sport women’s rugby championship match Nov. 3 in Quebec City.

It is Alberta’s sixth Monilex trophy in program history, a CIS record that puts an exclamation mark on a season that saw the team go 9-0.

The Pandas began the tilt in dominant fashion against the Ontario University Association finalists from Guelph. Following a Rebecca Fairbairn three-point penalty kick, fifth-year player Louise Chavarie, who hails from Gaspe, Quebec, scored back-to-back tries—both of which were converted by Fairbairn—to give the Canada West champs an early 17-0 lead.

Fifth-year scrum-half Chelsea Guthrie, who would later be named the national championship MVP, added to the total when she busted a tackle down the right sideline for the try. Another convert by Fairbairn made the score 24-0 at half-time.

But there would be no quit in the Gryphons. After being physically owned in the first half, Guelph showed strength and resolve in the second half, and put that to use by scoring a pair of tries, both of which went unconverted, to make the score 24-10.

The Pandas, however, dug in to fend off a furious Gryphons effort, and added another try, this time by Jen Cousineau who powered through three Gryphons tacklers to push the Pandas lead to 29-10.

“We knew it was going to be a tough game when you get to the final,” said Pandas head coach Matt Parrish. “Our plan was to get ahead with this little bit of wind. Guelph came out really hard in the second half and it took us a while. I just thought we played a really disciplined game today. I’m very proud of them.”

Alberta outscored their opposition 117-32 during their three games at the tournament. Dominant all season long, the Pandas outscored teams by an average of 48-5 in the regular season and 45-8 in the Canada West and CIS championship tournaments combined.

“They are a tough opponent, they retain possession very well, they attack both sides, and so they are pretty unpredictable. They have a balanced attack and a good defence,” said Gryphons head coach Colette McAuley.

Besides Guthrie’s tournament MVP, which adds to a stellar career that saw her collect the 2012 Canada West MVP award and win bronze at this summer’s FISU University Games in Russia, five of her teammates—Fairbairn, Sabrina Kelly, Amee Svatos, Julia Goss and Alanna Fittes—were named championship all-stars, while Fittes, the Canada West leading scorer this season, was named Player of the Game in the championship final.