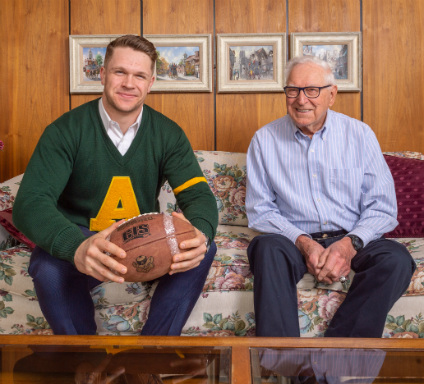 Ed Ilnicki lived with his grandfather during his five years at the U of A. "Getting to share my experiences with him and hear his thoughts on the challenges and triumphs I faced throughout university was very special," he says.

How Ed Ilnicki, who wanted to be part of something special, became a go-to player on and off the field. 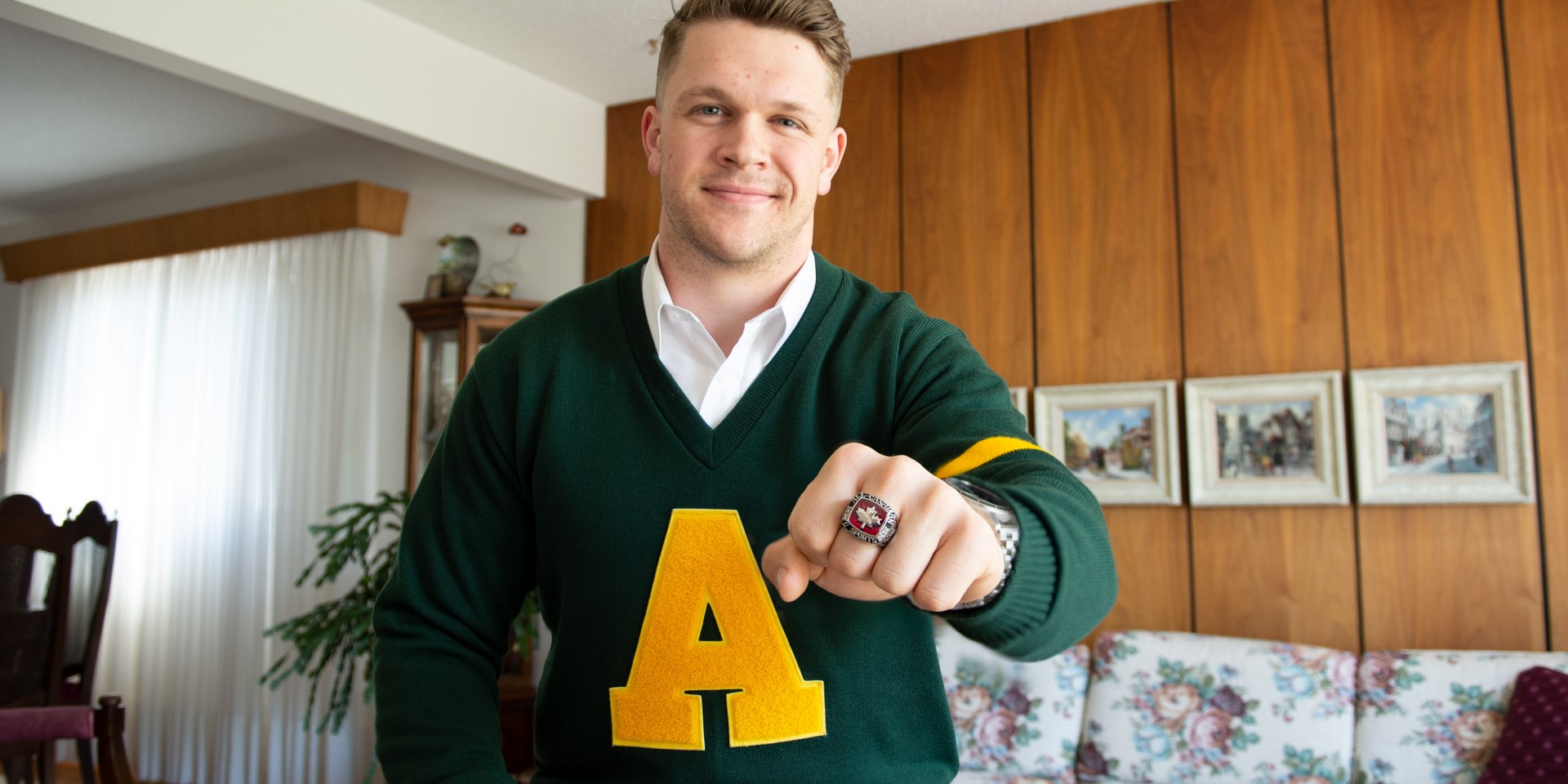 Ed Ilnicki was a leader on the field with the U of A Golden Bears football team and off the field as he earned a business degree and a certificate from the Peter Lougheed Leadership College. (Photo: Richard Siemens)

In 2012, Ed Ilnicki was a young running back running roughshod over the Edmonton Public High Schools league in leading his Spruce Grove Spartans to the provincial championship game.

A good student, Ilnicki was sure to become the backbone of a varsity football offence somewhere. Queen’s University, whose coaches had been courting him since he was in Grade 10, was the frontrunner, despite his parents being University of Alberta alumni and having a sister working towards an engineering degree at the U of A.

“Of course, the U of A fit the bill in terms of academics, but the football opportunity wasn’t perfect,” he said. “Until I met with Coach Morris.”

The fact of the matter is, the U of A Golden Bears football team hadn’t been competitive for decades. Inconsistency had plagued the program since the end of Jim Donlevy’s first go-round when he led the Golden Bears to five Canada West titles and a national championship during an 11-year span between 1971 and 1982.

Over the next 31 years, hard times fell on the program, which would achieve a record better than .500 just six times.

Unlike professional sports team, which build consistency by keeping a core group of stars together through the prime of their careers, university teams—whose players are at their zenith for only a couple of years near the end of a four- or five-year run—build consistency on culture, and not just a winning one.

A string of well-intentioned quick fixes and a value system that placed winning above all else, almost counterintuitively put the program into a three-decade-long tailspin both on and off the field.

In 2013, 14-year Canadian Football League veteran Chris Morris was brought in with the idea that if a new culture was built on a foundation of academic excellence and graduating good people first, winning would come.

Ilnicki said he received a call and met Morris within a week of the new coach taking the job. Morris laid out his plan for what he wanted the program to look like.

In sport there are no guarantees, and this is especially true of a rebuild. Morris told Ilnicki it wouldn’t be easy, and though Morris wouldn’t guarantee on-field success and championships, he guaranteed that Ilnicki would be part of building something he could be proud of.

“I could see Ed was interested in helping us building something from the bottom up,” said Morris.

Ilnicki went back to the drawing board, this time making his decision by focusing on education.

“Knowing that I was going to a top-tier school as far as academics are concened and that I would get to play football right away were two things that really sold me on the U of A,” he said.

The next step was to find a place to live close to campus. While other students moved in with friends and teammates, Ilnicki moved in with his grandfather. He said that during those five years, their relationship transformed from a grandson and grandfather to two roommates who debated anything and everything.

“He turned 92 years old in April, so we have many differing opinions, but getting to share my experiences with him and hear his thoughts on the challenges and triumphs I faced throughout university was very special,” he said. “We both love each other a lot, and I would do anything for him.”

He added, “Living with Pops was the best part of my university experience.”

Back on the field, the rebuild came as advertised.

“It was a lot harder than us first-year recruits thought it would be,” he said of a first season that saw the Golden Bears go 0-8. “We brought in some good Alberta kids and all of us thought we should be able to be competitive quickly, but that first year showed us there was a lot of work to be done.”

That first season did have its positives. Ilnicki was brought in as a team captain.

“The core leadership group is about service and about work, and he does those things very well,” said Morris. “He is a prototypical leader—he cares about everybody on the team, his standard is very high and his work ethic matches his standard.”

And though success on the field was slow to come, the foundation the program was intent on building was taking shape.

Ilnicki said the number of players who lose their way academically is down, as 95 per cent of eligible players now return each fall.

“We wanted every player who came into the program to grow as a person, not just a football player, but in how they approach their relationships and how they approach the classroom,” said Ilnicki. “We’re now graduating academic all-Canadians at a rate that is tops in the country.”

Ilnicki, himself a perennial academic all-Canadian, found his own footing in the business program.

“I remember going through concepts in an introductory finance class, which is actually pretty easy when you have someone who can explain it really well,” he said.

From that introductory class, Ilnicki began leaning toward finance-related internships with ATB Financial and another with a government relations firm.

“The co-op program is what sold me on the U of A, and it lived up to the billing.”

Ilnicki also got involved in student life. He spent three years on the executive, the final year as president of the University Athletics Board, the student group that represents U of A varsity athletes and leads efforts to help them find life balance throughout their student-athlete experience.

In 2015, he applied and was accepted as part of the first cohort of the two-year Peter Lougheed Leadership College program.

“Studying and working through problems with education, science, political science, engineering and psychology students was challenging, but incredibly valuable,” said Ilnicki. “I firmly believe that better ideas come from teams that are as diverse as possible, and I cherish the relationships I was able to form with the people I met through that program.”

Then, suddenly, the on-field successes started to mirror what was happening off the field. During the winless 2013 season, Ilnicki managed a respectable 63 rushing yards per game. Four years later, opponents had no answer for the Golden Bears offence as Ilnicki averaged more than 183 yards on the ground per game in breaking the Canada West single-season rushing record. He also ran in 11 touchdowns and helped lead a resurgent Golden Bears program to the playoffs.

For that, Ilnicki was awarded the Hec Crighton Trophy as the best university football player in the country.

He points to the development of the Golden Bears offensive line as the main reason for his success last year, as well as a tryout with the CFL’s Ottawa Redblacks, which helped to jump-start his season.

“Ottawa told me to go enjoy my final year and come back when I was done,” he said. “Like a lot of guys on the team, this year was my last opportunity to play in this conference, so I went with it. There was going to be no hesitation, just a mindset of complete focus on one play at time, and putting everything we could into each rep.

“I think you saw that across the board from all the fifth-year guys.”

Despite the season ending with a 39-22 loss to the University of Calgary Dinosaurs, Morris said he couldn’t be prouder of Ilnicki and everyone who stuck by the program.

“He was part of my first recruiting class,” said Morris. “That group came into a defeated and broken culture, and were part of building something special. I owe them a lot.”

As for what’s next, Ilnicki is back from Ottawa after an unsuccessful bid to make the Redblacks, but still determined to live out his dream of playing in the CFL. After that, he said, maybe banking, maybe an MBA; either way, he wants to thrive in a setting where he can effect change.

“I want to find a new community where I can add value and try to improve things for everybody, and try to be a good representation for that community.”