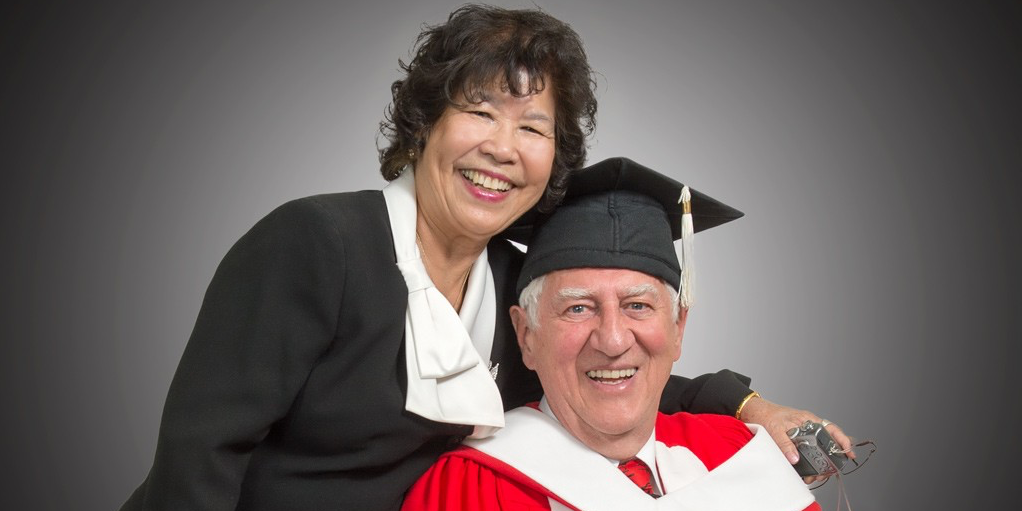 Russell Schnell with his wife, Suan Tan Schnell, before receiving his honorary doctor of science degree from the U of A at the Augustana Campus convocation ceremony May 31. (Photo: Richard Siemens)

(Edmonton) Renowned atmospheric scientist and University of Alberta alumnus Russell Schnell credits much of his success to a rural upbringing in Castor, Alta. And as he addressed the 2015 graduating class of the U of A’s Augustana Campus, he urged students to be proud of their rural roots.

“Be proud of that rare heritage, and the skills and trust in the basic goodness of humanity you have acquired, both in your early youth and here at Augustana,” Schnell told graduates at the Camrose-based campus May 31 as he received an honorary doctor of science degree.

Schnell started life not far from Camrose, just down the highway in the town of Castor. “For me, a rural town provided the most incredible place to grow up; the word “boardroom” didn’t exist.

“A rural upbringing never appeared to me to be an impediment; in fact, it gave me a great advantage,” he told his audience. “As many of you will know, in a small town your reputation is everything.” He went on to note that his small-town experiences helped him develop skills and attitudes that have served him well, including the values of trust and fairness.

Since graduating in 1966 from the U of A with a bachelor of science degree, Schnell has followed the threads of his work to more than 70 countries, but travel wasn’t always so smooth. He shared with his audience a story that took listeners to India during the Bangladesh war, where Schnell found himself stuck in the war zone without a plane ticket or any money. It turned out that having rural Alberta on his bank-account records won him the benefit of the doubt.

When Schnell later asked the bank manager why he advanced the young student the money for a plane ticket, he was told that “anyone from a farm who came to Swansea University (Wales) might be trustworthy.”

The story began when Schnell received a scholarship to study anywhere in Europe. “I wrote Sweden on my scholarship application, a country leading the sexual revolution. My penmanship is atrocious, and the assignment committee could only make out ‘Sw,’ so they sent me to Swansea Wales!” So much for sexy Sweden, but his core values from rural Alberta helped him fit in just fine at the conservative school.

The graduates and their guests were also treated to a short lesson on climate change from one of the great minds in atmospheric science.

Schnell has published more than 120 papers on ice nuclei, ozone, Arctic air pollution, greenhouse gases, and methane leaks from oil and gas operations. He is currently deputy director of the global monitoring division of the U.S. National Oceanic and Atmospheric Administration, and served as a member of the Intergovernmental Panel on Climate Change, which shared the 2007 Nobel Peace Prize with former U.S. vice-president Al Gore. So naturally, carbon dioxide is on his mind.

“Increasing carbon dioxide concentrations from burning fossil fuels is changing the atmosphere,” Schnell explained. “Each carbon dioxide molecule acts like a feather in a feather bed holding additional heat. The more ‘down feathers’ in the atmospheric blanket, the warmer the Earth will become.” He noted that the process is basic physics, and “one cannot argue with physics.”

Schnell further explained that one litre of gasoline produces three kilograms of carbon dioxide, and that CO2 stays in the atmosphere for up to 1,000 years.

In closing, Schnell urged the new graduates to be ready for dramatic environmental, political and social change in their lives. “Talk to your parents and grandparents, ask them what their life was like when they were your age, then think on how much things have changed—and then multiply it by three to five.

“I wish you all well in this journey, which I assure you will be fantastic.”