Education student uses “double-telepresence robot” to sit in on class after being sidelined by surgery. 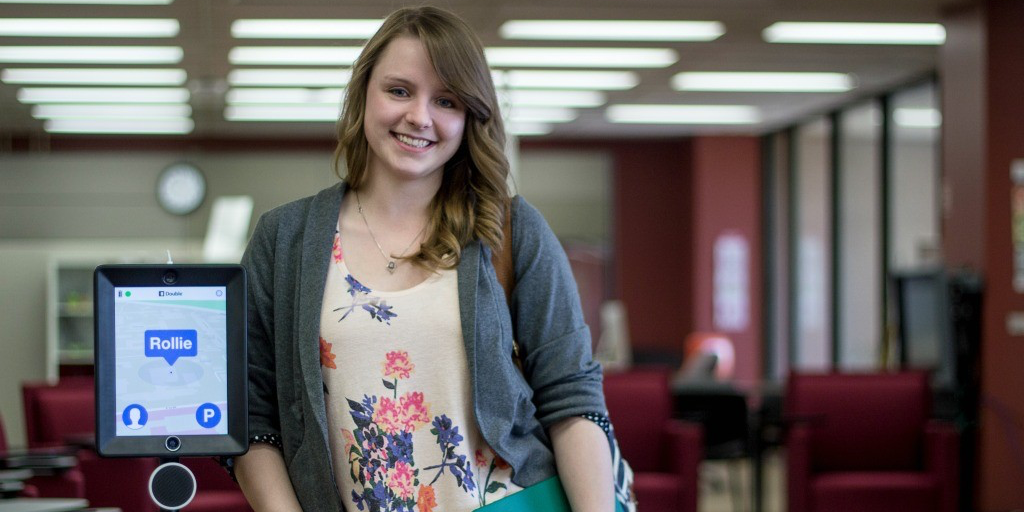 Samantha Bruns with Rollie the Robot

(Edmonton) Elementary education student Samantha Bruns found herself in a dilemma at the beginning of the spring semester in May: surgery or school? She had been on a waiting list for surgery for more than six months, so she decided to take a chance and register for EDEL 305 - Introduction to Language Arts.

“On the first day, I let my professor, Trudy Cardinal, know that I might need to miss a few days due to the surgery, never thinking that it might happen,” she said.

“Of course, two weeks later I got called in.”

Where another student might have dropped the class or arranged to get the lecture notes, Bruns is never one to take half measures. Besides, she had another solution in mind.

“I took the EDU 210 course [Introduction to Educational Technology] in the winter semester, where we were exposed to lots of new technology. Because our course was online, I actually met my professor, Anwen Burk, through Rollie the Robot at Maker Day in March.”

Rollie had been used by faculty for meetings and some instruction, but this was the first time a student had the opportunity to put the technology into practice in a course.

“Rollie is a double-telepresence robot, so he sends and receives information in real time,” explains James Park, consultant at Tech in Ed Support and Solutions. The robot consists of an iPad mounted on a two-wheeled base. The user controls the movements of the mobile base, and the speaker, microphone and webcam, from a workstation off-site.

“I could move Rollie around using the arrow keys on my keyboard,” said Bruns. “It was actually pretty easy, like a video game.”

Although she could be present in the class and could hear all of the discussion, she had to find a creative alternative for speaking up in class. “After the surgery, it turned out that I couldn’t talk, so we opened a Google hangout and I could type my comments to my classmates. At first they were texting me back, so I had to remind them that I could still hear—they could just go ahead and talk!”

Cardinal, the professor who agreed to host the “new” student, has no reservations about using the technology again. “I was happy to give it a try,” she said. “It was fun and required minimal extra planning. I did catch myself talking louder than usual, though,” she adds.

Cardinal notes that it was helpful to have a human “buddy” with Rollie to troubleshoot while she was teaching. “The other students in class were excited at first, but having Samantha participate via Rollie quickly became a non-issue.”

“We talk about diversity and flexible learning, but having tools like Rollie gives us the chance to model what we preach,” said Park, adding that Rollie has been loaned to other faculties for presentations and perhaps a little “wow factor.”

Bruns, who started her degree in a different program, says she appreciates having the chance to be part of a learning experience for everyone involved. “That’s what I loved right away about education: it is a real community. The professors here are teachers, not talkers.”