Sather on the Sather: Clinic a ‘tremendous facility’ for athletes, public 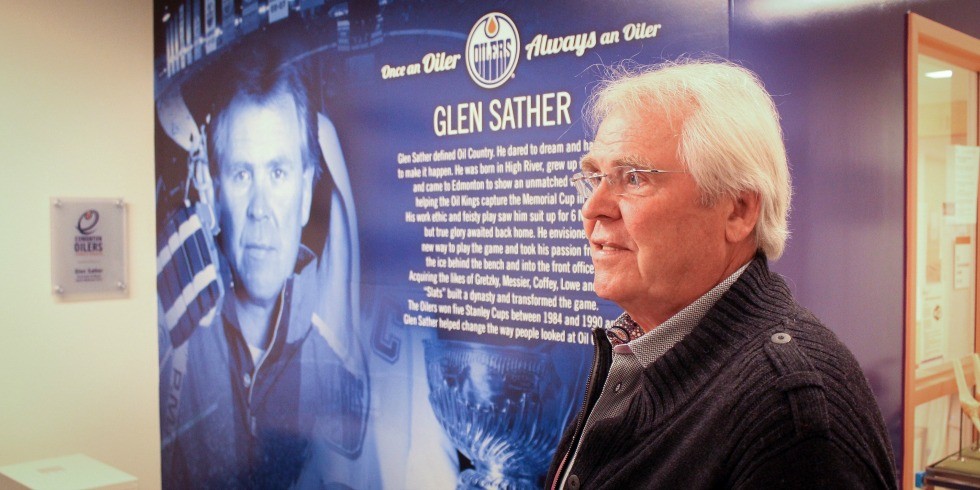 Glen Sather said it was "humbling" and "impressive" to stand in the expanded sports medicine clinic that bears his name.

(Edmonton) When Glen Sather played for the New York Rangers in the 1970s, sports medicine was an inexact science. So imprecise, in fact, Sather himself sometimes tended to the walking wounded.

“When I got there, we didn't even have a bike for training. We had some players with ankle and wrist problems, and I used to tape them,” said Sather. “Medical trainers in the National Hockey League really weren’t qualified to be medical trainers—they were equipment people. There was really no medical training, other than the doctors that would see these guys. “There was no physiotherapy, no massage therapy—there wasn’t anything like that.”

That was something Sather wanted to change when he became head coach and general manager of the Edmonton Oilers in the late 1970s. In doing so, he became a strong advocate for the University of Alberta and the Glen Sather Sports Medicine Clinic, which since opening its doors in 1988 has become one of the world’s top clinics specializing in patient-centred sport, exercise and musculoskeletal care.

Sather, now general manager and president of the New York Rangers, toured his namesake clinic on Oct. 10, his first visit since its move last year to its expanded home in the Kaye Edmonton Clinic. The Sather clinic, operated by the faculties of Rehabilitation Medicine, Medicine & Dentistry and Physical Education and Recreation, proves just how far sports medicine has come through its multidisciplinary team of physicians, surgeons, physical therapists, orthotists, physiatrists and massage therapists, and services such as 3-D gait analysis for runners.

Sather remembers the clinic providing first-class treatment and rehabilitation to the Oilers players at a time before NHL clubs provided in-house services. When a player was injured, he trusted the expertise of people like founding clinic director and orthopedic surgeon David Reid, physical therapist David Magee and Art Quinney, an exercise physiologist and former dean of the Faculty of Physical Education and Recreation, he said.

“If you have specialized people that are handling your athletes and training and treating them properly, you get more out of them,” said Sather, who was in Edmonton to celebrate the 30th anniversary of the Oilers’ first Stanley Cup championship. “The players develop confidence, perform better, they’re not worried about their injuries, they rehabilitate quicker, get back on the ice sooner. The University of Alberta was certainly a big part of that, and these guys and this clinic were a big part of that.”

Touring the clinic provided an opportunity for the NHL legend to reminisce with former U of A colleagues such as Reid and Magee, who now serves as academic clinic director.

Reid, now a professor emeritus in the Faculty of Rehabilitation Medicine and the Faculty of Medicine & Dentistry, remembers Sather as a pioneer who saw sports medicine and injury prevention as a way to keep a leg up on the competition.

“He was always looking for protective equipment, he was always on the forefront of looking for rule changes that would protect the athlete,” said Reid. “He believed in education of athletes. Glen is a unique individual.”

Sather and the Edmonton Oilers also played a key role in getting the clinic off the ground, Reid said. The university supported the idea of creating a multidisciplinary clinic, but funding was an issue.

The Oilers and the Edmonton Eskimos organized the Carnival of Champions—a grassroots community event that included pie-throwing and dunk tanks at the Butterdome—with proceeds going toward the new U of A clinic. The event helped the clinic raise $3 million in one year—and the Carnival of Champions proved so successful it became the Edmonton Oilers Community Foundation.

When the clinic opened its doors for the first time, it was under the Sather banner—a request of former Oilers owner Peter Pocklington, Reid said.

Sather said it’s “humbling” and “impressive” to stand inside the new Glen Sather clinic. More than a quarter-century later, the facility continues to deliver top quality care to people of all physical abilities.

“This clinic has trained an awful lot of people in this business, and they’ve also had a lot of people come through here—I’m told 39,000 athletes came through here last year,” Sather said. “You can describe it as one-stop shopping here: you can be examined, you can be treated and you can be rehabilitated. In most places, you can’t do that. It’s a tremendous facility.”

Sather on the Sather: Clinic a ‘tremendous facility’ for athletes, public
Newsroom