Saved by the sun 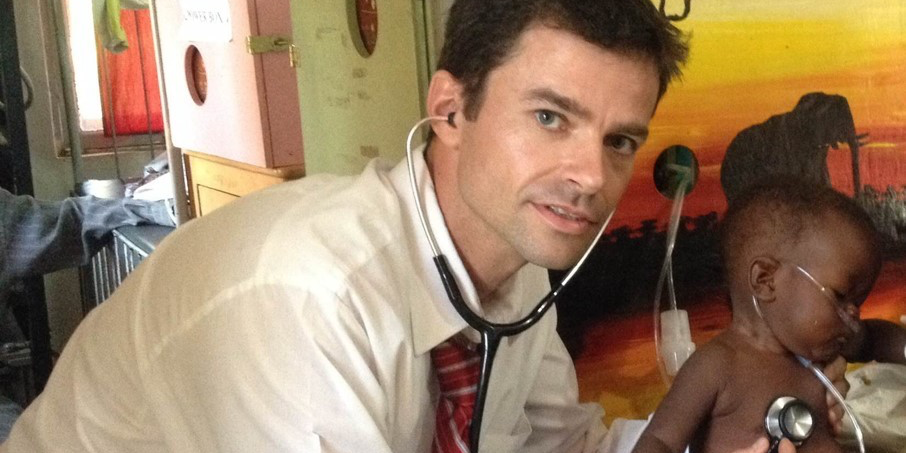 By DEPARTMENT OF PEDIATRICS NEWS STAFF

This story was originally published as part of the Department of Pediatrics annual report, by Sandra Kinash, with additional files from Ross Neitz.

A new twist on the use of renewable energy is saving children’s lives in Africa. The innovation—a-solar powered oxygen delivery system—is providing concentrated oxygen in hospital for children suffering from severe pneumonia.

The device created by Michael Hawkes, an assistant professor in the University of Alberta’s Division of Pediatric Infectious Diseases, is the focus of a recently published study in The International Journal of Tuberculosis and Lung Disease and is already in use in two hospitals in Uganda.

“Solar-powered oxygen is using freely available resources—the sun and air—to treat children with pneumonia in the most remote settings,” says Hawkes. “It’s very gratifying for a pediatrician doing research in a lower-resource setting to fill a clinical gap and save lives. It’s what our work is all about.”

Each year, 900,000 children die of pneumonia worldwide, with most deaths taking place in Africa and Asia. Vaccines and medications exist, but are being rolled out slowly in Africa where diagnostics are poor and chest X-rays are not readily available.

Children with severe pneumonia have infected lungs that need concentrated oxygen until antibiotics begin to work. The concentrated oxygen helps overcome a problem with oxygen exchange caused by the lung infection. In Canada, it is available at the bedside in every hospital room. In developing countries like Uganda, it’s harder to come by reliably.

Hawkes, who worked in Ugandan hospitals in the communities of Kambuga and Jinja for over two years, quickly recognized a need for a more reliable oxygen source. In low-resource settings, oxygen can be delivered using cylinders that are often in short supply, or concentrators that depend on electricity. In Kambuga there were multiple power outages each day, some lasting for up to 48 hours.

“In the hospital you often didn’t have access to oxygen cylinders. So the power goes out and you’re out of luck. We had children that died in front of our eyes,” says Hawkes.

To establish a reliable oxygen source, he and his colleagues came up with the idea of using solar energy. During the day, solar panels supply power to an oxygen concentrator that strips oxygen out of the air. At night, charged batteries from the panels supply the power to the concentrator.

To fund the idea, they received a Grand Challenges Canada grant, a Government of Canada initiative that supports global health research. The funds were used to set up the systems at the Kambuga and Jinja hospitals. “We piloted it on a group of 28 children and it showed that you could use the solar panels and batteries to run the concentrator 24/7. We treated children with pneumonia and the system worked,” he says.

Next they conducted a larger randomized controlled trial, which showed that solar-powered oxygen delivery works just as well as the conventional method of oxygen delivery using cylinders. The trial officially ended in 2015, but after seeing such strong results, the hospitals continue to use the solar-powered systems.

Hawkes and his team are now working with the Clinton Health Access Initiative in hopes of soon expanding the system’s use to 80 hospitals across Uganda.

“If we could expand it, could you imagine how many children would have access to life-saving oxygen therapy?” Hawkes wonders. “The challenges are different in these areas of the world, and the innovations need to be different as well.”

Saved by the sun
Newsroom