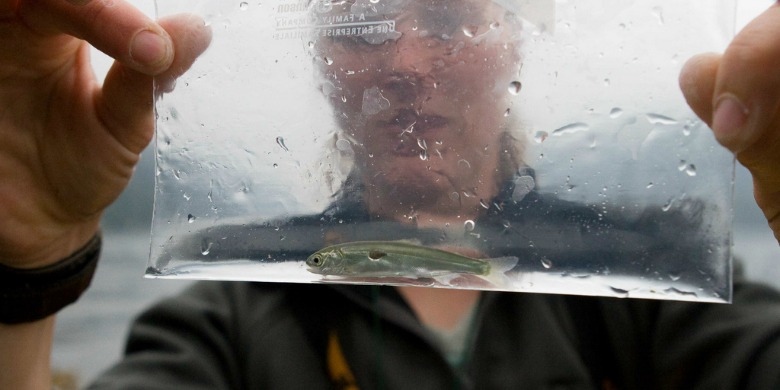 121115-stephaniepeacock-salmon-banner
Results in the bag: UAlberta researcher Stephanie Peacock checks a pink salmon for sea lice picked up after passing by a salmon farm on Broughton Archipelago.

(Edmonton) A University of Alberta-led research team has some positive news for British Columbia’s pink salmon populations, and the salmon farming industry that has struggled to protect both captive and wild salmon from sea lice infestations.

There has long been concern that concentrations of sea lice in B.C.’s fish farming pens spread to wild fish stock in surrounding waters.

The researchers discovered that by changing the timing of sea lice treatments, one salmon farming region improved the health of its farm Atlantic salmon—and the action has helped the struggling population of wild pink salmon to begin recovering.

The research was focused on salmon farming operations in one specific area of the B.C. coast, the Broughton Archipelago, which lies between the mainland and the northern tip of Vancouver Island. The researchers describe the area as the historic ground zero for studying the impact of aquaculture on wild Pacific salmon.

Over the past decade, salmon farmers in the area have gradually shifted the timing of anti-parasite treatments to the fall and winter months. As a result, there have been fewer sea lice in coastal waters as juvenile pink salmon migrate to sea in the spring.

Researchers estimate that by 2009, the mortality rate from sea lice for juvenile pink salmon moving out to sea through the archipelago fell to less than four per cent. This mortality estimate applies to the salmon that survive natural causes of death such as predation.

During the early 2000s, sea lice associated with the Broughton salmon farms had a devastating effect, killing an estimated 90 per cent of the migrating wild juvenile salmon that were left after natural mortality had taken its toll.

Lead U of A researcher Stephanie Peacock says because of their small size, juvenile pink salmon are highly susceptible to the effects of sea lice. “During a period in their life cycle, lice are free-living and are easily swept out of fish farming enclosures into the path of migrating wild fish,” said Peacock.

The researchers found that the fall and winter anti-parasite treatments greatly reduced louse numbers on the penned Atlantic salmon by the time wild juvenile pink salmon passed close to the farming sites on their annual migration from B.C. rivers out to the ocean.

Although changes to the parasite treatment schedule in the Broughton Archipelago show positive results, Peacock emphasizes there are still some concerns.

“The ecological effects of anti-parasite chemicals are poorly understood, and lice have developed resistance to parasite treatments in other salmon farming regions,” she said.

The research was published Nov. 14 in the journal Ecological Applications, by Peacock and supervisor Mark Lewis, in collaboration with Martin Krkošek from the University of Otago in New Zealand, and Stan Proboszcz and Craig Orr of Watershed Watch Salmon Society.