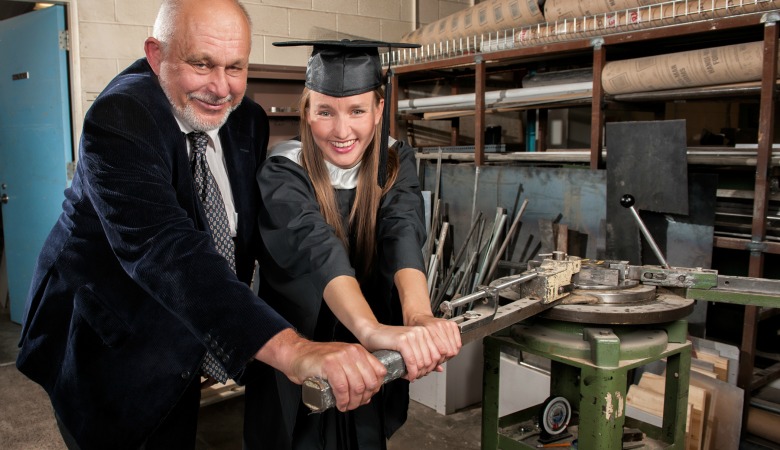 130603-laila-steen-with-dad-banner
Laila Steen's desire to study design abroad led her from Norway to UAlberta, where she found opportunities to explore her talents and career options. Now she's looking forward to enjoying her June 5 convocation ceremony with her dad, Erling. (Photo: Richard Siemens)

(Edmonton) By the time Laila Steen finished high school in Norway and later decided she was ready to attend university, she was certain of two things. She wanted to study design, and she didn’t want to do it in her country.

“I really wanted to study abroad and wanted to do so in English,” recalls the industrial design graduate. “I wanted to learn the language and thought doing so would give me opportunities for international jobs.”

So she began looking into universities before choosing the University of Alberta’s industrial design program, which she says is unique among several other programs worldwide. And before she completed her studies, she got a rare opportunity that changed her career focus.

“There are several opportunities to pursue through the industrial design program. For example, you could pursue business or engineering,” she says. “You don’t have those kinds of opportunities in Europe, where most art and design universities and colleges are separate from a faculty. Usually you don’t have that interdisciplinary opportunity. Because of the interdisciplinary nature of the program, it has prepared me for a broad field of design.”

Steen says she wasn't sure what she wanted to do when she started studying at the U of A. But that was the least of her concerns, because she was learning the right skills that would lead her passion and allow her to approach any design problem or field of design.

“Throughout my studies, I’ve been able to explore and find my path,” she says.

That path has already led to national recognition. Two years ago, Steen won the top student prize in the Interior Design Show, Canada’s largest contemporary design fair, for a chair she crafted using a single piece of cowhide.

“That award was an affirmation of what I was doing and my abilities. But that also forced me to question whether furniture design is something that I really wanted to do,” she says.

Fortunately, she says, it was a question the program had prepared her to ask. And now, with the tools, abilities and confidence she has gained, Steen has set her sights on a new area of design.

“Through my program I did a practicum involving medical design at the Institute for Reconstructive Sciences in Medicine. And I’m now looking at doing a master’s degree that is partly facilitated by the institute and the faculties of arts and science in what’s called surgical design and simulation,” Steen says. “It uses a lot of the processes designers are familiar with, such as 3-D modelling and printing, in surgical design and planning.”

When Steen crosses the stage June 5 during convocation, she’ll be celebrating her journey with her dad, Erling Steen, who travelled some 6,000 kilometres to join in on an experience she says Norwegians don't get to have.

“In Norway, when you graduate, there’s not much of a ceremony or celebration around the whole convocation,” she says. “We don’t really do the hats and the robes. It’s more like you get a letter in the mail. So it’s a unique opportunity for him to come and see that aspect.

“Convocation will be a tribute to the fact that I decided to make the commitment to travel so far to study. And he's here also to celebrate with me and validate my convictions. So this convocation has some symbolic meaning for us.”