Scholar's heart is in Aboriginal communities 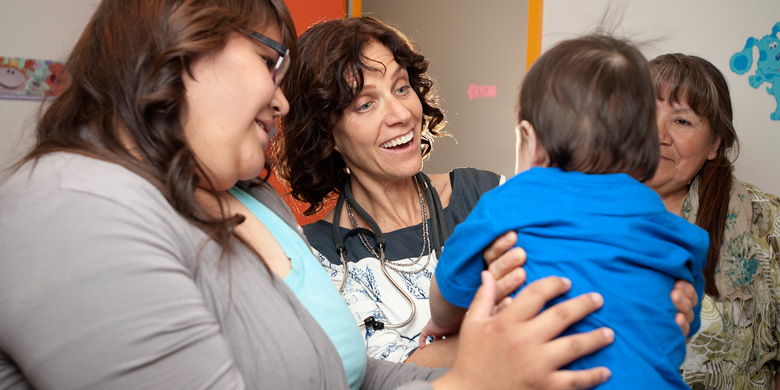 (Edmonton) As a pediatrician, Lola Baydala knows a lot. But when she started working side by side with Alberta’s Aboriginal people to improve child health in their communities, her knowledge also blossomed into understanding, and into something deeper.

Baydala’s dedication to researching child health issues and seeking solutions at the community level has already earned her the gratitude and respect of her Aboriginal partners, including the honorary name of Wagcheshi Wiya (Brave Hearted Woman), bestowed in 2011 by the Alexis Nakota Sioux Nation.

Now Baydala is being recognized for her ongoing work through the University of Alberta Community Scholar Award, one of three inaugural Community Connections Awards being given May 23 as the U of A celebrates the dedication of its campus citizens to the larger community.

Baydala, who holds science and medical degrees from the U of A and is an associate professor, will be honoured in a noon-hour ceremony at Edmonton City Hall as the university recognizes the above-and-beyond contributions made to Edmonton by U of A people and partners. She joins two other recipients: Community Leader Award winner Sharon Morsink and UAlberta Advocacy Award winner Renée Vaugeois. The public is invited to RSVP to attend the event.

Baydala’s work—and that of her students and colleagues—reaches far beyond her medical practice in her work with members of the Alexis First Nation, Enoch Cree Nation and Maskwacis Cree Nation, as well as with Edmonton Public Schools to develop grassroots programs for child health education.

All of Baydala’s projects are first rooted in the cultural beliefs, protocols and input of community members, and based on mutual knowledge and respect. “They have expanded my own capacity to understand and contribute to building healthy communities, and together, we are finding common ground where we can work together to address complex issues.”

Baydala began teaming with Aboriginal communities through her hospital-based teaching clinic at Misericordia Community Hospital in Edmonton; many women from surrounding areas who had their babies in the hospital became her patients, and through them, she became aware of their needs.

“I got to know many of the families and I felt I had to learn more about their communities to provide better care.”

She asked the Alexis Nakota Sioux Nation, located west of Edmonton, whether she could provide a service. The band agreed, and asked Baydala to assess the learning needs of their school-age children to help secure funding for classroom support. That led to discussion and eventual funding of programs for preventing substance abuse for Alexis Nakota Sioux Nation, as well as for Maskwacis Cree Nation schools in Hobbema.

Along the way, grants and program results were co-presented by Baydala, her colleagues and her Aboriginal partners, sealing profound research relationships that reflect not only university knowledge, but also equally valuable community knowledge, Baydala noted.

That, in turn, helps assure the success of community programs, she believes.

Most rewarding for Baydala is the insight she’s gained as a person. Driven at first by curiosity to explore health issues, she established relationships with her community partners that extend beyond data maps and academic papers.

“I’ve learned to value heart knowledge as well as knowledge that comes from scientific evidence.”